That Awful Man and His Diet Coke

President Le Merde and his habits. 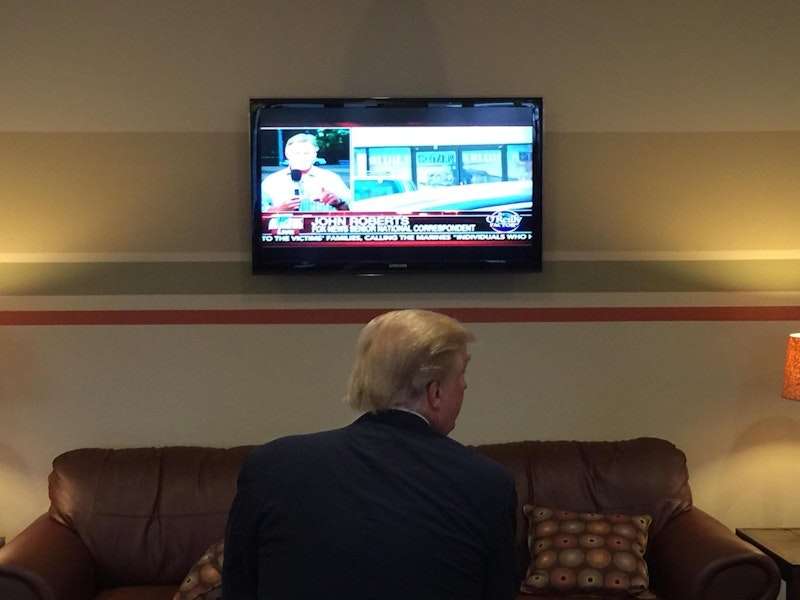 “The ammunition for his Twitter war is television,” says The New York Times. They’re talking about Donald Trump, and what they mean is that he watches TV and then tweets about it, and that he does these things a lot. It’s a garbage-in, garbage-out situation, with no quality control and no valve for moderating input or output. Trump’s character is absent such features. His chief of staff, John Kelly, can’t get the shambling ape to reliably show up for work at 9:30.

Trump’s focus is on stuffing himself and then spewing. “No one touches the remote control except Mr. Trump and the technical support staff—at least that’s the rule,” the Times says. “During meetings, the 60-inch screen mounted in the dining room may be muted, but Mr. Trump keeps an eye on scrolling headline.” There we have the stuffing phase. Now spewing: “Watching cable, he shares thoughts with anyone in the room, even the household staff he summons via a button for lunch or for one of the dozen Diet Cokes he consumes each day.” For more spewing there’s the President’s Twitter, an endless stream.

Like Beavis and Butt-head, Trump’s glued to TV and yammers about what it shows him. Long ago people persuaded themselves that TV viewers could be satirized as listless potatoes; this was the human being rounded down to the inert. The novel and movie Being There, both celebrated, set forth Chaunce the Gardener, a dim bulb taken by silly Washington to be an elder statesman. All the poor fool wanted to do was sit quiet and watch his TV, his mind empty. God bless her, the critic Pauline Kael made the point that TV viewers don’t sit quiet. She said their minds jump around and they call out their commentary about what they’re watching. Now we’re living through a satire about the TV viewer as politician, and Kael was right.

But the dozen Diet Cokes, what of them? McDonald’s, Kentucky Fried Chicken, “massive slices of dessert with extra ice cream”—one sees no interest in dieting. Yet Trump has to have Diet Coke. Real Coke is easy to find, and the calories mean nothing to a guy like him. I suppose Trump chooses diet because it’s the crappy inferior version. Mr. Shlock must choose pre-nups over love, TV over reading, junk food over food. And he drinks fake soda. Like the villain in a kiddie film, he’s always to type.

Except that Diet Coke occasioned the most out-of-character Trump moment I know of. “I have never seen a thin person drinking Diet Coke,” he tweeted in October 2012. This tweet is no fake, it’s his. Yet it’s good. I’d say it’s better than “What this country needs is a really good five-cent cigar.” At any rate it isn’t worse. We find out that Trump plays in the same league as Thomas Riley Marshall (governor of Indiana from 1909 to 1913, vice president of the United States from 1913 to 1921).

The secret is that neither man originated his comment. One reads that the cigar quote had been kicking around newspapers in the late 19th century. And from The Crossing Places by Elly Griffith, a novel published in 2009: “‘Really,’ Ruth says drily. She has noticed before that you never see a thin person drinking a Diet Coke.” Trump didn’t read the book, assuming that it marks the idea’s first appearance. But the notion was floating about and somebody repeated it to him.

Of course, Trump’s comment shows no awareness that he’s fat and that he drinks Diet Coke. This side of the matter has been trumpeted so loudly that one forgets the cleverness of his adopted phrase. Normally cleverness would seem to be Trump’s Kryptonite, something that he can’t come near without harm to his being. But no. We see that lack of wit may be (well, is) important to the Trump character, but that it isn’t crucial. His key trait is how barren he is—that’s what remains no matter what. He has no self-awareness and no charity, and his world is flattened out. Still, he knew a good tweet when he heard one.