GOP Tax Plan Is a Travesty, But Not Because of Deficits

Democrats should focus on how it actually affects people's lives. 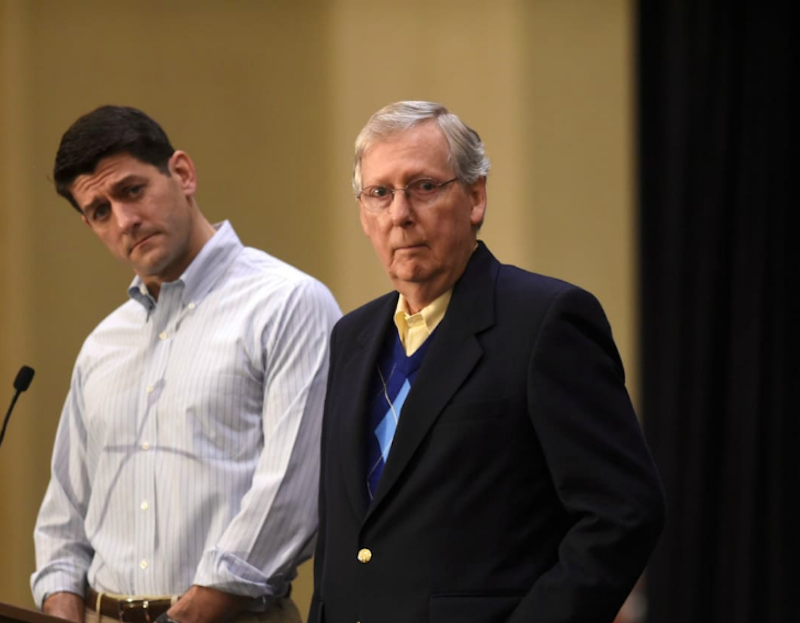 President Donald Trump has assured the American people that the proposed GOP tax bill will hurt him financially and that many wealthy people he knows are upset about it. It's all about the middle class, he claims. Wealthy Republicans wanted this bill badly, even though it would reduce their wealth? I suppose there are some Trump loyalists who believe he’d act against his own economic interests, or that he has any particular feeling for the masses, but I lean towards the Congressional Research Service’s conclusions that, under the Senate plan, Americans with annual incomes between $500,000 and $1 million would see the biggest percentage increases in their after-tax income.

Those making over $1 million will do fine once the bill is passed too, while all those attempting to survive on a 40-hour work week making minimum wage will have to get a second job or take the bus to work. There’s no economic reason to reduce taxes for the upper tax brackets when the bottom 90 percent own only 23 percent of America's wealth. These tax cuts will be a boon to the economy, Republicans tell us, when in reality they’re a thinly-disguised payoff to the donor class, as Sen. Lindsey Graham admitted.

The GOP explains that corporations receiving tax cuts will invest more, increasing jobs and wages. There's plenty of cheap capital available to them now, so they'd already be investing in anything they feel there's a demand for. Unless that demand increases, investment won't either, and this tax cut isn't increasing demand. Americans have maxed out their credit cards and have no cash. You can create the greatest investment environment and it’ll come to naught if there are no sales to drive it. The Republican Party doesn’t understand this most basic concept.

Unless the tax bill never makes it to Trump's desk, it appears that more than $1 trillion will be added to the national debt that the GOP is ostensibly passionate about keeping in check. That's a big burden to lay on the future generations conservatives keep telling us will be stuck footing the bill, as if goods and services could somehow be sent back through a time warp to pay for the profligacy of one’s grandparents’ generation. In fact, each generation consumes what it's able to produce, so you can forget about that $42,000 Time ludicrously claimed every single American owes as their portion of the national debt.

Republican deficit hawks reserve their squawking about budget discrepancies for entitlement payments. When they're presented with the choice of a substantial tax cut that comes with a major debt bump, the decision’s easy. The thought of cash in their pockets magically turns them into deficit doves. Democrats are justified in attacking GOP hypocrisy on deficit spending, but too much emphasis is inadvisable, as deficits are less significant than they are commonly understood to be. There are plenty more relevant issues to harp on that people can actually connect to their lives.

The total U.S. national debt is currently over $20 trillion, which would be something to wring your hands over if the nation had to eventually pay it off upon demand in gold or another valuable commodity. Instead, the debt is denominated in U.S. dollars, of which the U.S. government is the sole producer. Also, judging the health of an economy by its gross debt level, a Republican tendency, is strictly for the financially illiterate. Even debt/GDP ratios are fairly meaningless as any sort of predictive tool. Of all the money the U.S. has ever spent, that $20 trillion debt represents the amount that it hasn't collected back in taxes. That's $20 trillion in net assets that people can give to corporations in return for goods and services.

Anyone thinking that the $20 trillion will get paid off eventually so the U.S. can return to fiscal responsibility lives in a fantasy world that would turn into a real-life dystopia if a 10-year plan to pay it down to zero were ever enacted. The government would gain nothing by doing so, as it doesn't require tax revenues to spend even a dime. It would simply be subtracting $20 trillion from the economy.

The Democrats who tell you this tax cut will raise the debt to a “dangerously high” level can't explain why because they have no idea what they're talking about. If $20 trillion in debt doesn't cause inflation, why would $21 trillion? Many of them also point out that Bill Clinton produced a budget surplus, without being able to explain why government surpluses, which remove assets from the economy, are always a good idea. Capacity utilization in the U.S. economy is presently at 77 percent, well below the rate where inflation becomes a danger. Even though the robot invasion hasn't begun, workers have no bargaining power, causing wage stagnation for years, so there's no current inflationary pressure on that front. The yield on a 20-year Treasury is 2.58 percent, meaning the markets are not anticipating much inflation in the future.

Democrats should focus on how the proposed legislation will actually affect people's lives. Perhaps one benefit for the non-wealthy that will come from passage of this bill will be that it provides further evidence that increasing the deficit to stimulate the economy will not lead to economic disaster, even if the stimulus fails.

Firms won't pull their capital back to the U.S. when the corporate tax rate goes down to 20 percent, as the GOP claims, because they've already invested elsewhere where labor costs are much lower. Their stock prices will go up though. Under the Senate plan, Americans with the lowest incomes will pay a higher rate in order to give people who make $500,000 annually a 4.6 percent tax break. Whether or not the tax cut goes into law, the Democrats will be better off hammering on points like these than pointing to the national debt. The real debt crisis in the U.S. is the personal debt crisis, but nobody ever talks about it.