Ronan Farrow and His Enlightening Cheekbones

A new kind of guy holds forth on TV. 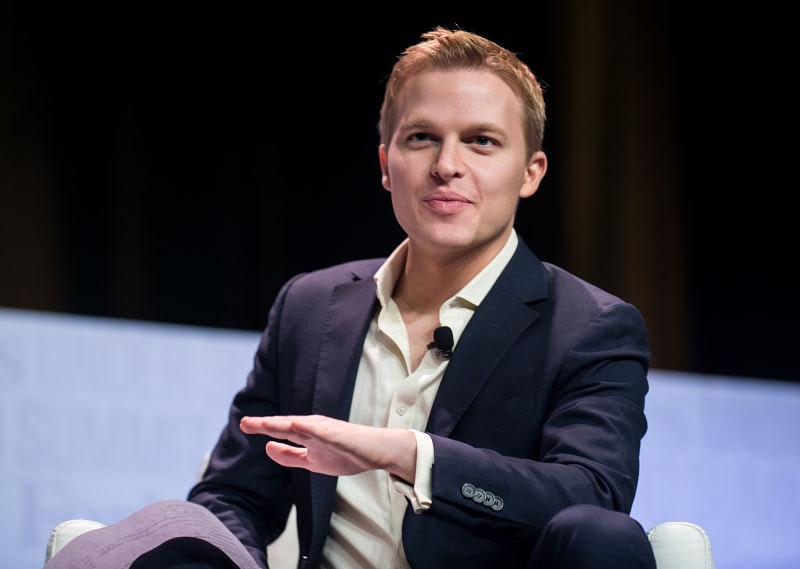 Good for Ronan Farrow. The biggest story of the year, and he delivered the coup de grace. He did so after flopping as a host at MSNBC. Sturdy fellow! I like that this resilient man is so fine-boned and small. Meanwhile, the Weinstein mess shows us a larger and rougher fellow trapped in the minor leagues. Not Harvey himself, but A. J. Benza, ex-host of cable gossip shows. The New York Times tells us the Benz wound up collecting private gossip items for Weinstein. These were nuggets about celebrities, and Weinstein swapped them with reporters who had bad stories about him. Benza must’ve been good, since Weinstein was an exacting man. Still, Benza’s job was to fetch. A personality doesn’t fetch, a functionary does. Benza had been demoted in life. Now he worked for a paycheck and had to fear the boss. He’d washed out in the personality race.

The big guy is a hamburger with a growly voice. On air his style was to be bulky and authoritative, and he was all right at this. (I’ve seen his show Mysteries and Scandals on YouTube and I liked it.) Most playgrounds have been run by kids who seem a lot more like Benza than Farrow. The Farrow kids are stuck in the corners, and the lesson learned is that the Benza types have what it takes and the Farrow types don’t. This lesson has been looking forlorn as college and white-collar living become standard to more Americans. But the sense remains that the Benza types—more broadly, the manly men who stick their chins out—ought to be the world’s successful people and something is off if they aren’t. Consider the new order’s prize specimens, the cyber geeks. They combine vast success with pronounced body odor, if you go by the public view. They’re the lords now, but nobody wants to be around them.

This view has suffered many counter-examples, thanks to all the private schools where bright, small-boned young fellows have been taught they can pipe up without fear of being stuck. These fellows don’t repel, exactly, but they’re so clear as to their own attractiveness that this becomes a problem. The boys make speeches and sing out opinions. Ronan Farrow shows us that the type can lose this defect. He’s the special boy everybody listens to, but he isn’t a pain. Discussing the Weinstein revs with the panel, he’s quick and lucid in the way of his kind. But also he’s polite and easy. He doesn’t seem to think he’s performing a feat. If anything, he seems to be showing good-natured deference. Yet he does this without deferring to anybody actually in front of him. Eyes up and bright, Farrow lets his view reach off-stage: to the idea of respectful interchange, the efficient spread of information, things like that. Obliging these principles, he does his bit and spiels. If somebody’s going to hold forth, let them do it with that vibe. Meanwhile, somebody that pretty is worth looking at.

Brains, manner, and hypnotic cheekbones—the kid’s got a good combo for delivery of detailed info on TV. The need for this gift will mount as our modern age’s supply of information keeps piling up. See how Rachel Maddow puts on her waders and takes us long step by long step through the accumulated facts about Mike Flynn. She’s found her way of managing the feat (her goofy good cheer, her gawky-but-cute constructions, her trick of playing up complexity while taking the curse off). Farrow shows us another. Neither approach represents a guy kind of style. But all right, the future arrives.

Farrow’s type will never become our top image for manly success. But I bet it will climb the charts. Meanwhile, A.J. Benza has growled his way to the small time. His master, that far greater and nastier meatball called Weinstein, has been brought down by complaining women, journalism women, and a kid who resembles a sparrow. In the White House there remains the Biggest Meatball, and we await the last struggle.