Brought to you by The New Republic. 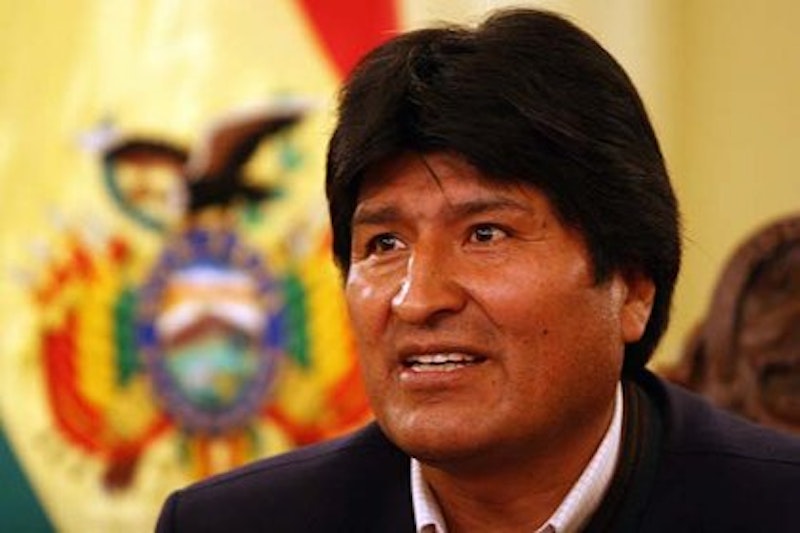 A man at The New Republic is tickled by the plight of Evo Morales, president of a nation but unable to land his official state aircraft. Morales had allegedly pissed off the United States by saying the wrong thing about Edward Snowden. As a result, the story goes, he was denied passage through the air space of France, Spain and Portugal. The poor man had to stop in Vienna for 14 hours before finally getting home.Note that France, Spain and Portugal say no, they never denied passage to the president's airplane. It's Bolivia that says the drama took place. The New Republic’s Ryan Kearney takes Bolivia's word for it and is delighted. The underdog nation from the Third World says it was ground down by the Man. Ryan Kearney, on behalf of the Man, says it was a pleasure.

“The leftist Bolivian president was in Moscow on Monday and Tuesday for the Gas Exporting Countries Forum, and must have been feeling quite important indeed,” Kearney begins. A reporter asks about Snowden. “Here was a chance to weigh in on the international story of the moment,” Kearney writes, “and at the same time further his anti-American bona fides.” Morales opens his big mouth and is subjected to the wrath of the overlords, his ordeal of putt-putting from airstrip to airstrip.

Kearney imagines him on his way home at last: “Staring out the window at the horizon, he must be thinking about the U.S. Empire, and whether its great reach was responsible for his unscheduled layover.” And: “the president of the Plurinational State of Bolivia must be thinking about how he's not nearly as important as he felt just 24 hours ago.”

That last thought must weigh on the president “more than anything,” Kearney says. The writer seems to think that Third World politics is all a put-on, a hostile display by underlings. It's nothing but cheek directed at the United States. He imagines the attendees at the Moscow conference—Putin and Ahmadinejad and Venezuela's Maduro—and they're all sniggering up their elbows about “their needling of America.” What needling? The list of examples rounds off with Morales kicking out “the American ambassador, the Drug Enforcement Agency, and the U.S. Agency for International Development (U.S.A.I.D.).”

Kearney doesn't get that the expulsion wasn't only a gesture. It was an action. Maybe Morales doesn't want the above entities operating in his country. Maybe he has good reasons for that, given that his country's interests are not ours. We're located at the high and low ends of the world economic system. The system doesn't operate for everyone's benefit, not even up here. Down there—well, God help you. If the system did what it did to us, imagine how it's ripping off people down there.

Kearney's piece reminds me of a column Peggy Noonan wrote during the Bush years. It was a daydream about Osama bin-Laden's capture, and how George W. joshes at the White House with the boy-soldier who did the deed. I think a columnist must be missing a lobe of the brain to write such a thing, a celebration for a victory that hasn't happened yet. Noonan seems daffy and gloating, Kearney seems ugly and gloating. Unlike Noonan, he has an actual victory to celebrate, but his willingness to do seems grotesque. His attitude is this:  The thing about these tinpots, these Third Worlders? They're small time. Backwoods. They get up on their hind legs and they find their hind legs don't go that far. We can remind them of that.

What did Morales say that bothered Kearney so much? On giving Snowden asylum: “If there were a request, of course we would be willing to debate and consider the idea.” That's it. But Kearney adds this quote from later in the conference: “I know that the empires have an espionage network and are against the so-called developing countries. And in particular, against those which are rich in natural resources. Bolivia, as well as Venezuela and Ecuador, are exposed to constant surveillance from the U.S. Empire.”

Does Kearney think that the U.S. doesn't spy on those countries? If so, he can take a look at the NSA scandal. If they're willing to surveil us up here, what are they doing to the people down below? And no wonder Morales didn't want our operatives within his borders.