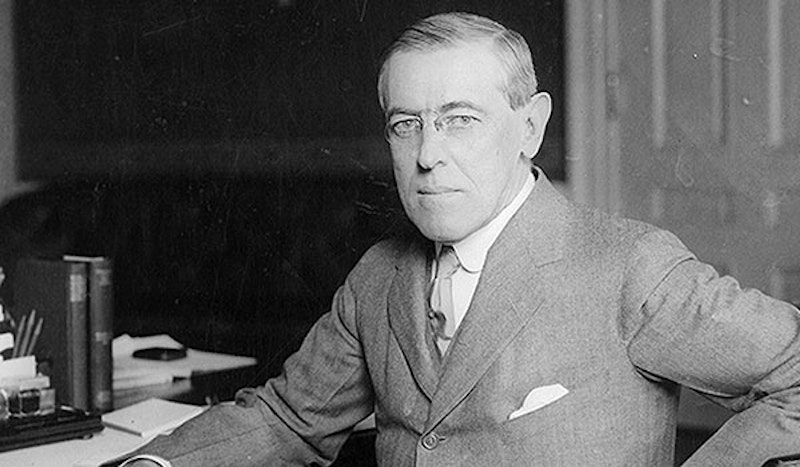 Even the most deranged of campus protestors sometimes have a point, and Woodrow Wilson, the recent target of Princeton protestors’ anger, is just one of several historical phenomena deserving harsh revisionist history reassessment:

—Woodrow Wilson was as racist as leftist Princeton protestors say. In fact, Progressivism was rooted in (novel, not merely lingering) white supremacist arguments a century ago, from the global warmongering explicitly intended to spread the values of the white race, to Prohibition and the injection of a warmed-over (immigrant-unfriendly) Protestant religiosity into classrooms.

The Progressives of Wilson’s day were also well aware—and pleased—that the minimum wage laws they pioneered would make it harder for the poor and immigrants to find jobs, causing them to starve or flee back to their own countries (the early Progressives understood the devastating impact of minimum wage laws better than today’s progressives such as Hillary Clinton, who unwittingly echo the same bad policies with new-fangled rationales).

Progressivism has always been an evil and authoritarian movement, and at the start of it all was former Princeton professor turned President Wilson, switching from antiwar talk to pro-war propaganda (and censorship) while re-segregating parts of the government that had earlier ditched racism. If his name becomes reviled at Princeton—even at the Woodrow Wilson School of Public and International Affairs there—it’s not a moment too soon.

—Franklin Roosevelt, recently praised as a proto-socialist by the execrable Bernie Sanders, has also just been cited positively by the Democratic mayor of Roanoke, VA for of all things FDR’s Japanese-American internment policy, which the Mayor sees as evidence that segregating Syrian refugees wouldn’t be such a bad or unprecedented move.

Maybe it’s high time we remind Democrats that electing FDR was a bad move. He wasn’t even successfully pressured into letting more Jews into the U.S. until about a year before World War II ended. Recognize him as the brutal American Mussolini he was, even if you’re glad he beat the real Mussolini.

—Socialism, which a recent poll suggests is now looked upon favorably by over half of Democrats (thanks in part to the aforementioned Sanders), cannot magically escape its close ideological association with both Communism and Nazism in the 20th century. Despite the whining and eye-rolling of 21st-century socialists if you bring this up, it absolutely is not a mere homonym that made the Nazis the “National Socialist German Workers’ Party.” Myriad horrors spring from the same desire for centralized command and control.

Big government was all the rage across the ideological spectrum in the benighted 20th century, and the result was about one tenth of the human race slaughtered (and not by Hitler alone). Nothing deadlier than big government has ever happened. Some 300 million died (at a time when the Earth’s population was about three billion) at the hands of big governments around the world last century. This should be the one core lesson people take from that time. Instead, it appears we have learned nothing at all, certainly not Bernie Sanders.

—Populism may well win control by plurality within the Republican Party next year, and it’s a powerful reminder (a) how stupid that political force is and (b) how dangerous democracy is, as the Founders, with their fear of the unenlightened masses, well understood. Perhaps you hated conservatism and libertarianism in the late-20th century—but in the form of Donald Trump you’re going to see what a Republican Party shorn of those fragile, precious philosophies looks like.

It’s as if, in ditching lessons from the 20th century, we’ve rolled the clock back to the 1890s, with Progressives on one side (albeit ones less inclined to mention Wilson by name now) and Populists on the other, plus a few crazed anarchists and angry Arabs scattered around the fringes. So much for “progress”! Next stop: World War I (or III).

—The Pilgrims have recently inspired an ironic cartoon of the Native Americans warily eyeing the religious-zealot refugees who came to these shores from the Old World. The funny thing is that I’ve seen the cartoon praised by people on both sides of the Syrian refugees issue.

In a bit of a role reversal, the left seems to take the oddly nationalist view that whatever policy got our ancestors here must be good, while the (paleo) right takes the view that we should learn from the Native Americans’ mistake and avoid suffering the same sort of genocide they did. I’m all for calling mass slaughter of the Native Americans wrong and not glossing over such crimes, though I think we can better prevent them through strong individual rights than through closed borders.

—Rape Culture isn’t nearly as prevalent as some on the OCD left would like you to believe—all part of their broader campaign to make innocent people feel guilty (and thus easily ordered about) at all times. It’s telling that 19 Harvard law professors have signed a denunciation of the documentary The Hunting Ground meant to expose colleges as pro-rape nightmares.

So many lies, bogus statistics, faked cases, and propaganda have been produced lately in the name of the (noble) effort to decrease rape that it may be time for intellectually honest people (if there still are any) to start examining the motives and psyches of the anti-rape activists, just as we rightly analyze the minds of rapists.

Might all these purportedly pervasive pro-rape cultural signals exist mainly in feminists’ own (guilt-wracked) fantasies rather than in real men’s desires, for instance? The feminists, after all, seem to be the ones who see “rape!” in every pair of high heels, fashion ad with a hunk in it, or gendered pronoun as the mood strikes them, not us dudes. There’s something sinister—yet perhaps instinctive and natural—going on there, and perhaps it’s time to dissect it more critically and with greater psychological realism, lest more rage be misdirected by politics.

—James Madison, perhaps fittingly since he was the architect of the Constitution and thus our political order, must now be reassessed as a revisionist himself—a bit of meta-revisionist history, you might say. It appears that his notes on the Constitutional Convention were slightly inaccurate and self-serving.

—Our Military/Intelligence Complex is a blunt instrument that Obama and neoconservatives alike, while pretending to be opposites for branding purposes, might like to dispatch to places like Syria and Mali. Before we do that it’s worth remembering, no matter how great a blow to American pride it might seem, how much damage our prior intervention efforts have done, as reporter Ben Swann succinctly sums up in this clip about what U.S. and Saudi efforts in Syria have yielded already.

—Dalton Trumbo really was a member of the Communist Party at a time when that organization was an international conspiracy bent on the violent overthrow of governments around the world and their replacement by totalitarian regimes that would never grant freedom of speech to the likes of Trumbo.

It makes me happy, then, that the current film about him, despite the best efforts of Hollywood to lionize its leftist heroes, has made only about $600,000 as I type this. Again and again, as with Steven Soderbergh’s much-discussed but little-viewed pro-prostitution film The Girlfriend Experience (which, like Trumbo, only made about $1 million), Hollywood’s most political projects seem to yield the smallest box office returns, and that’s probably for the best.

—Culture-Mixing, such as, say, reinvigorating Hollywood by borrowing some Hindu mythology or medieval Japanese tales of visitors from the moon, would be fine with me—oh, but wait! Cultural appropriation, so long a source of sophistication and tolerance in Western culture, is suddenly frowned upon by the left. At the University of Ottawa, they even shut down yoga classes lest a culture suffer appropriation (h/t Charles Hope).

This way lies an idiotic and highly dangerous fetishization of “cultural purity,” with the left once more destroying its own purported values. It’s all historically ignorant, too, since cultures have been mixing and blending since the beginning (thank goodness). Even the tribes of Germany, those Aryan poster children for purported racial purity, began as mere agglomerations of whatever random tribes were all willing to vow loyalty to the same general.

If we truly had history to do over, I would suggest vowing loyalty to no one.