Ben Carson Has His Eyes Opened

Not for long, but it tells you something. 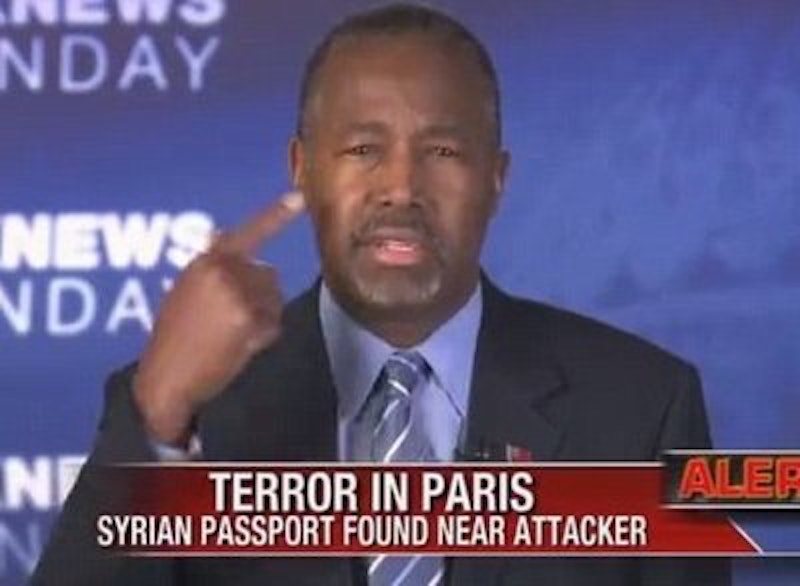 Ben Carson always looks like lifting his eyelids would be beneath him. The one time he switched was when Chris Wallace asked him the phone call question. Wallace: “And you have said that you would, as president try to create an international coalition militarily to go after ISIS. How would you put that together? Who would you call first?” He broke in on Carson to pose the question, interrupting the candidate's rather discursive answer about Paris. At the interruption, Carson's eyelids jumped to a normal human height. As the question trundled toward a conclusion, the lids flapped down and back up, down and back up, like wing beats. Right before the question ended, the name ISIS came in. At that moment Carson's eyes sheared straight to his right.

Then his eyes came back to center and he started talking. “Well, what I was just explaining is, you know, how we use the resources that we have,” he said. He was going on with his old answer. Twice more Wallace barged in with his phone calls question. Finally Carson answered. “I would call for all of the Arab states to be involved in this,” he said. “I would call for all of our traditional allies to be involved in this. You know, I don't want to leave anybody out.” Journalists and pundits have said he choked. So did his handler, Armstrong Williams. “He’s been briefed on it so many times,” Williams said, apparently meaning ISIS. “I guess he just froze.”

Yeah, I guess. I mean, there's the eye shear, and by rights Carson should freeze: he ought to see himself as being found out. But I suspect he was mad more than anything else. His eyelids hauled themselves up at the start of the question, before its intent was clear. What Carson knew was that he’d just been interrupted. He'd been bumbling softly along: “And I think also, you know, looking at what was accomplished recently, with the taking of a city, you know, that's a long-range thing and it worked very well with the Kurds,” and so forth. Then Wallace blared his resonant voice and cut in. Donald Trump would have pushed Wallace back with a pointed “Excuse me” or a “Wait a minute.” But Trump is big, Carson isn't. Trump is equipped to make noise; Carson can only speak, and in that feathery, childlike voice he has. The egos are the same, but the physical equipment is different. Carson must submit, temporarily, in situations where Trump doesn't. He doesn't like it, and my theory is that’s why he shows a normal amount of pupil and eyeball through the phone calls exchange.

Armstrong Williams had a talk with Dr. Carson and came around to my point of view, or something like it. “Dr. Carson is very dismissive of the question,” he said, and the doctor “just thought it was a silly question.” Being interrupted wasn't the issue, the doctor just has standards. “Dr. Carson does not like answering hypotheticals,” Williams said, “and so he intentionally did not answer the question.” I guess because it presupposed the existence of a group called ISIS, and of a Ben Carson able to place calls from the Oval Office. Basically, Chris Wallace asked Carson a job interview question: Okay, here's a situation at work, what's the first thing you would do? Plumbers and newspaper editors ask job applicants questions like that. It's a good way to bypass chat about intentions and look at somebody's operational knowledge. With Carson the result was a word cloud followed by snippiness.

Ben Carson is a retired medical professional who didn't hear about the Knesset until a year ago. He has trouble with foreign policy questions. But he thinks he shouldn't, given that he is God's keenest instrument and our nation's destined leader. “Nobody has been able to sit down with him and have him get one iota of intelligent information about the Middle East,” says a man who's been setting up foreign policy briefings for the doctor. The Carson people suggest that this fellow is senile. I suspect he has fuck-you money and a snootful of quiet Ben Carson's attitude.