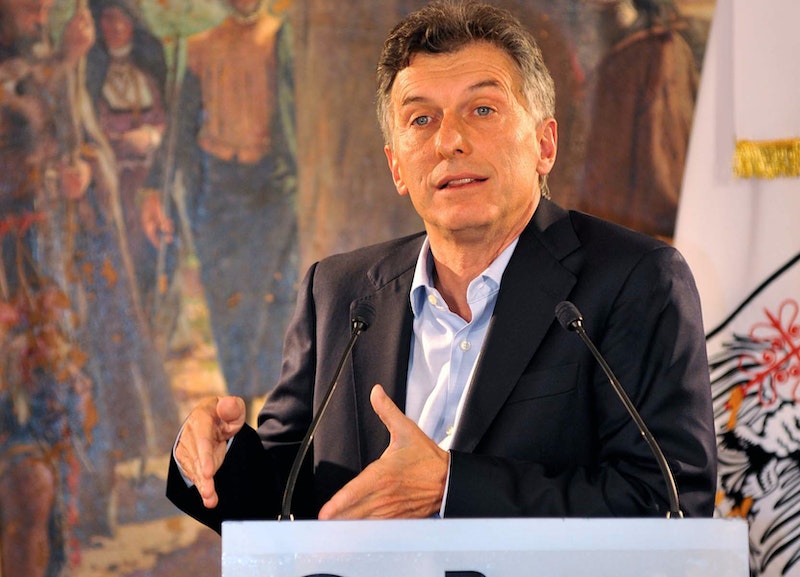 The election of Mauricio Macri, mayor of Buenos Aires, to the presidency of Argentina isn’t just a victory for his moderately conservative pro-market policies (which include good things but also some decidedly non-libertarian planks such as increased anti-drug efforts). It’s also a small victory for that more hardcore, consistent breed of marketeers known as “anarcho-capitalists.”

That phrase was repeatedly used over the past four years by Macri’s predecessor, outgoing Argentine president Cristina Kirchner, to describe the traders, investors, and entrepreneurs she falsely blamed for Argentina’s (autocratic) economic woes. Surrender to the forces of international capitalism and global markets, Kirchner warned, and there will be economic instability and social chaos. Better to continue giving the government plenty of leeway, always.

Argentines prefer the idea of free-market integration with the booming economies of the Pacific, though, and the claims of Kirchner and her would-be successors to factor “social justice” into their economic policies more effectively than markets do were not believed.

The likely unintended terminological bonus for people like me in all this, though, is the failure to make a successful scare-term out of the phrase “anarcho-capitalist,” which existed before it became a cudgel wielded by Kirchner. In philosophy and economics classes—and in more sophisticated political circles everywhere—it denotes those libertarians so strongly in favor of property rights and privatization that we hope to see all government functions turned over to the voluntary sector (whether as for-profit or non-profit entities).

Technically anarchist, despite grousing by more conventional anarchists about the use of such terms, this plan would leave humanity with no government at all—and thus, at long last, global peace and prosperity, despite the crap you’ve been fed by pro-government propagandists since birth.

Kirchner likely wasn’t thinking of anarcho-capitalist writers such as David Friedman (son of Milton), early-period Murray Rothbard, or Michael Huemer when she used the term, but my tiny (and growing) faction will accept her free publicity anyway. The connection isn’t a mere pun, either. Kirchner, after all, was pushing the message that markets equal lack of control, and lack of control equals disaster. When control means government instead of individuals with their myriad preferences, though, society is headed in the wrong direction. Rejecting her legacy is far from the abolition of the state, but it’s a step in the right direction.

If Argentines aren’t frightened by a dash of “anarcho-capitalism,” maybe they’ll start asking themselves, in growing numbers, what would happen if they took the concept all the way to its logical end. Maybe one day soon, the whole world will.