A Trump Presidency Is No Longer a Punchline 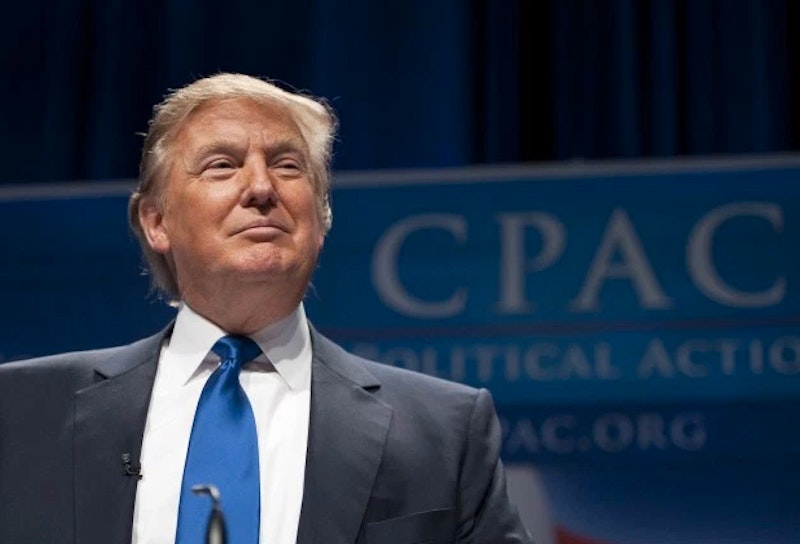 Let’s get one political reality clear: the 2016 presidential election revolves around Donald Trump. Nearly every story about the campaign is, in part, put through the Trump lens. It still baffles me, as well as anyone following the primary season who’s truthful enough to admit it. There’s still, in the vast majority of articles and TV broadcasts about Trump’s success, the qualifier but of course it’s unlikely he’ll win the Republican nomination. Maybe he won’t, but as someone who predicted that Trump would fade after the John McCain/veterans slur, his rude banter during the first debates, offensive comments about women, and then by Labor Day, Halloween, and most recently the Paris terrorism, I can’t say that his defeat of Hillary Clinton a year from now is inconceivable.

Liberal historian David Greenberg, in the current Atlantic, wrote a story “The Front-Runner Fallacy” that utterly misses the point of the Trump juggernaut. Trump’s just miles ahead of Greenberg, who foolishly ascribes most of the candidate’s success to mere name recognition. Greenberg cites Herman Cain, Rick Perry, Newt Gingrich and Rick Santorum in the 2012 Republican race as all having a moment or two at the top of the polls, but in all cases, that popularity was fleeting. Trump announced in June: it’s now November, and after all his vile attacks on immigrants, women, puerile Twitter rants about competitors, a continued lack of command on questions about foreign policy and contradictory economic proposals, he’s still leading in the polls. Greenberg, condescendingly in my view, writes: “[O]nly about 10 to 20 percent of voters are tracking the campaign closely. Normal people tend to tune out the arcane, minute developments that the Twitterati are quick to label game changers. Believe it or not, they have better things to do.”

Greenberg doesn’t address the simple fact that Trump’s presence in the race has boosted debate ratings to record levels, a revenue bonanza for the stations carrying these usually dull affairs. “Normal” people are talking about the campaign, and it’s because of Trump and the increased participation in social media. Unlike past “outsider” candidates, Trump plays by his own rules, speaks off the cuff, and every time you think he’s finally gone too far—as with his remarks about closing down mosques and registering Muslims—his poll numbers go up.

It’s no longer the early stages: voters in Iowa, New Hampshire and South Carolina will have their say in February, and if you can name a challenger who’s going to upend Trump, who’s going to rally the “sensible” Republican establishment, you’re more savvy than me. (And Ben Carson’s meltdown benefits Trump more than any other man; I omit Carly Fiorina, another flawed candidate, because while in other years she’d be making a stir, Trump has that “mad as hell” vote sewn up.) There’s a lot of noise about Sen. Marco Rubio—my preference—or Sen. Ted Cruz (the “controlled” Trump) making inroads as Jeb Bush, John Kasich and Rand Paul have flamed out, and that may be true. But while Rubio and Cruz are inching forward, Trump still gallops.

In Sunday’s New York Times, op-ed columnist Ross Douthat—more than a nominal conservative, unlike David Brooks—suggests that the way for a candidate to upend Trump is to ape Richard Nixon’s campaign strategy. It’s provocative, and Douthat makes many smart points—Nixon’s ability to conform to the views of disparate audiences, for one, as well as his real experience in foreign affairs—but neglects to mention that Nixon had decades of political experience before finally winning the presidency in 1968. Rubio and Cruz are first-term senators: they simply haven’t accumulated the wins, losses and chit-collecting of career politician Nixon, who was first elected to the House in 1946, 14 years before running against JFK, and with the advantage of being the incumbent vice president.

The thought of a wild-card President Trump is horrifying, given his extreme xenophobia and disinterest in even learning the details of the domestic and foreign difficulties facing the country. Democrats are still gleeful at Trump’s shocking durability, figuring Clinton would crush him in a general election landslide. Again, maybe that’s so. But consider this: while Democrats will turn out in force, however unenthusiastically, for Clinton, imagine the number of first-time or occasional voters who’ll go to the polls for Trump.

On a partisan level, I see only slim benefits to a Trump win next November. Should he prevail, it’s likely the GOP will keep control of the Senate, and even expand its majority in the House. And if Trump one day decides to, say, raise the income tax to 70 percent, he couldn’t get that legislation passed. Likewise with a proposed invasion of Russia. Ridiculous, right? I’d have thought so just a month ago, but not anymore.