The French State of Emergency Is Dangerous

This is not your typical war. 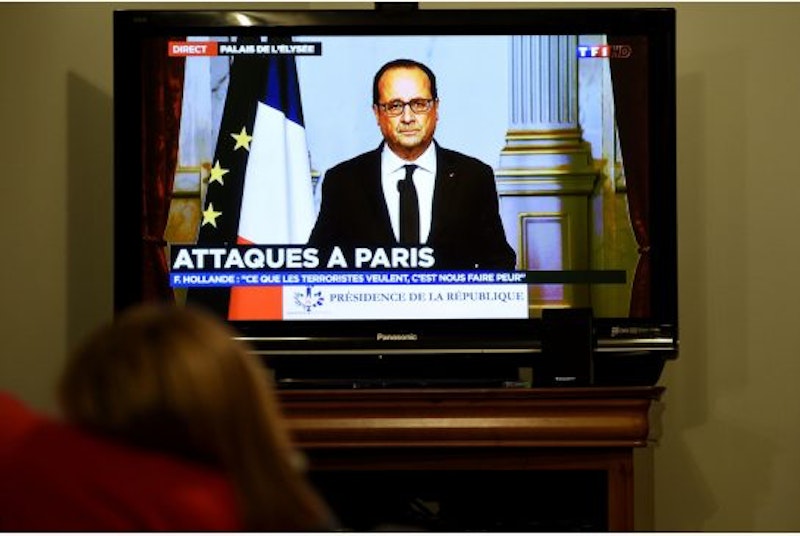 Francoise Hollande is furious about the Parisian attacks carried out by ISIS. “France is at war,” Hollande stated on Nov 16. France may decide it’s at war, but I don’t like the implications one bit.

I understand political rhetoric, but there’s reason to believe the French Parliament will follow the code of war down to the fine print. The clearest indicator of the government’s intent has already been placed into effect. According to the Nov 19 edition of The Guardian: MPs voted by 551-6 to boost and extend emergency powers. Three Socialist and three Green MPs abstained. Addressing parliament before the vote, the prime minister, Manuel Valls, said the increased security measures were a sign of France’s strength. “It’s the efficient response of a democracy, a free country,” he said, adding that other liberties could be temporarily limited. He continued: “We’re at war.” The vote to extend a state of emergency in Paris by several months is not practical.

States of emergency are supposed to be temporary. They’re lifted when an end goal is reached. History has demonstrated that when this state of affairs goes on for too long the situation becomes ripe for a tiny man to take power or for someone to drop something horrendous onto another country. Hollande’s goal is to completely destroy ISIS. My problem is that he wants to involve other countries in the task. His rapid-fire assessment is blackmail invoking moral obligations and the shadier dimensions of the superiority of one country’s nationalism over that of others.

President Obama has already said that he doesn’t think it’s a good idea for the U.S. to put men on the front lines against ISIS. Republicans and even some Democrats have taken him to task for his comments. The logic here is that “going to war” with a group that organizes by way of extreme fringe leaders of Islam and social media is not the same as fighting a recognized state.

Yet decisions based on facts still leads to dissatisfaction among parties because they’re not the facts they want to hear. The reaction is a fictional foreign policy slogan that recalls the George W. Bush era. If ISIS can’t be destroyed then France’s state of emergency will possibly be renewed in three months. If this happens and the U.S. has not pledged their involvement in the conflict, Hollande will become more vocal and Republicans on our end will continue to foam at the mouth. It follows then that a portion of American voters will become accustomed to the idea of another war as not only a possibility but also an inevitable right of protecting freedom.

The tricky thing in speaking about freedom is that it’s a word referencing an absolute situation. Freedom for France is total eradication of the attacker. How exactly does one quantify the point at which ISIS is no longer “together” or “exists”? It’s a question that doctors often encounter with cancer patients; you don’t always completely rid the body of the tumor, you just learn to manage the problem as effectively as you can. ISIS can never be completely destroyed even if every single opposing country joined France. This is because the point of ISIS is to propose a concept of unfettered mayhem. In a country that abolished the death penalty by way of guillotine because it became associated with an increasingly dark spirit, I’d suggest that Hollande’s words be taken with a grain of salt.