Gun worship gets weird, and the weird get guns. 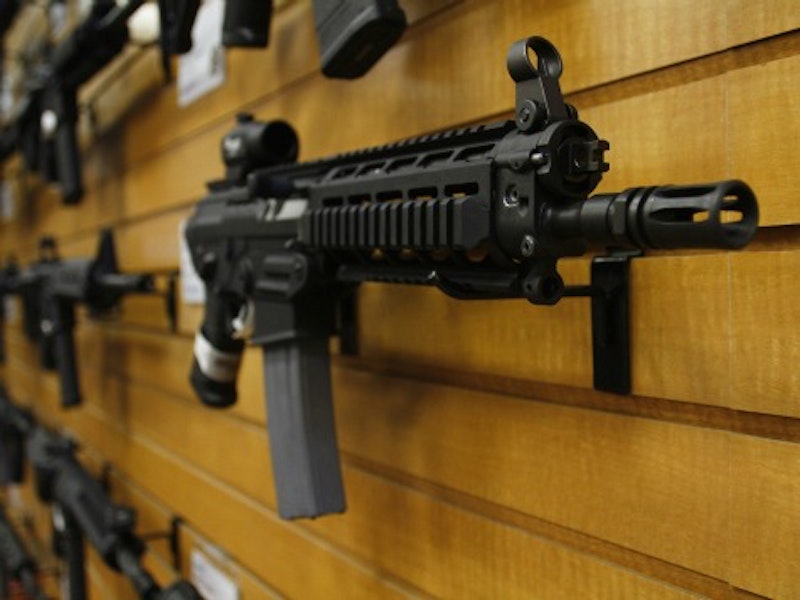 In some countries, such as Japan, guns are almost impossible to obtain. In others, like Switzerland, they’re easily purchased, but thought of as just "guns." Here in the United States, we have a unique situation. Guns are freely available, and are a fetish for certain enthusiasts. They’re not merely tools for self-defense. Unlike mere tools, guns in the U.S. evoke deep emotions and patriotic sentiment.

America's gun fetish manifests itself in a number of ways. A certain percentage of American men combine their lust for the female body with a physical attraction to guns. The Twitter "Girls and Guns" account caters to this crowd. Whatever your type (woman, that is) may be, they have it, from the "girl next door" with a hunting rifle to the underwear-clad model pictured with a cache of automatic weapons. There's even women in wedding dresses with weapons, which is a fad nowadays. I'm not sure what turns the viewers on more, the guns or the girls, but the combination of the two probably facilitates moments of exquisite release for a certain kind of "shooter."

I can get at least an inkling of why there’s this element of attraction to a physical object by thinking about the sense of power holding a weapon can give people. A feeling of invulnerability is certain emotion, probably attached to the survival instinct. Looking at, or fondling, a Glock would release more endorphins than a more utilitarian tool like a chainsaw, and even though there’s a thrill to using a chainsaw—the noise and vibration—I doubt many wood choppers sit around and moon over photos of a STIHL MS 201 T like gun fetishists might with a Sig Sauer P220 image.

Guns are precious objects to many Americans. So many unusual emotions are attached to firearms that you end up with a legal environment where even 90 percent of those on the FBI's consolidated Terrorist Watchlist can pass a background test to purchase a gun, according to the GAO. What happens is that the FBI gets notified after someone on that list purchases a gun. George W. Bush's administration tried to pass legislation aimed at preventing this, but the NRA led a successful campaign to defeat it, meaning that people who can't fly commercially can still buy a gun.

Even if the legislation that Sen. Dianne Feinstein is trying pass, making it illegal for federally-licensed firearms dealers to sell to someone on a terrorist list that the attorney general would compile, all a terrorist has to do is go to a gun show, where unlicensed individuals can legally sell guns. It's a terrorist's paradise here, and they must think we're really stupid. Ammosexuals are scared to death of terrorists, but terrorists love them. They're actually the best allies a terrorist could hope for.