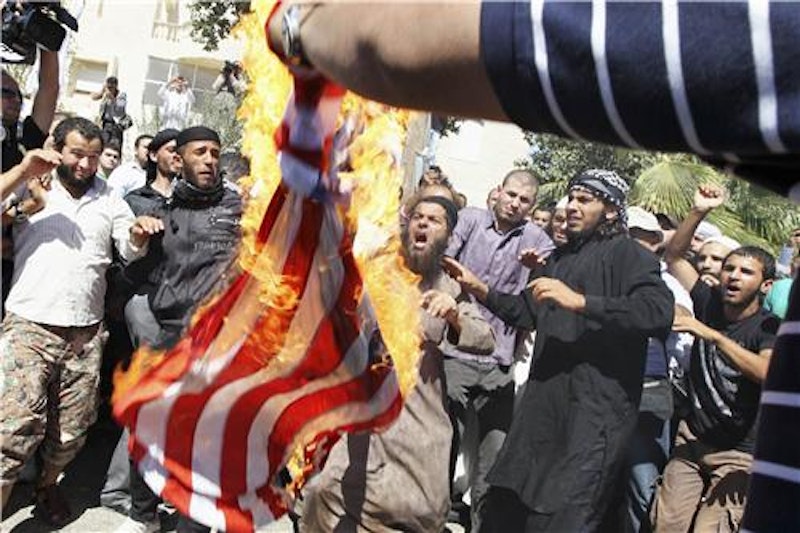 Social media isn’t a reassuring place after one of America’s routine shooting incidents, the latest of which took place at a Colorado Springs Planned Parenthood clinic. That's when all the armchair analysts rush to their keyboards to share their deep insights—gleaned mostly from preliminary news reports—into the latest tragedy. They’re eager to use the event to buttress their own narrative, while the sensible remain silent.

Socially conservative, anti-abortion proponents did their best to blame the shootings on liberals. On the left, the message was that homegrown terror is our real threat. From this quarter, the spin—almost as soon as the first bullet was fired—was that terrorism from brown-skinned Muslims is exaggerated, though when right-wing white men do it, it's virtually ignored. Such sentiment is encapsulated in a Global Post article—"White Americans are the biggest terror threat in the United States"—that NBC News tweeted in the immediate aftermath of the shootings. The article, by Peter Gelling, cites a study by the New America Foundation that revealed that almost twice as many people have died in attacks by right-wing groups in America than have died in attacks by Muslim extremists over the past 14 years. The starting date of the study is notable—September 12, 2001.

Gelling informs us that violent right-wingers get little coverage in the news media in comparison with Muslim attacks. He writes: "Most people will struggle to remember the shooting at a Sikh temple in Wisconsin that killed six people in 2012. A man who associated with neo-Nazi groups carried out that shooting." Really? I remember that one very well, as it was well-reported. He also points to the married couple who murdered two people in a Las Vegas pizza place, leaving a swastika on one of the bodies before killing a third person in a Wal-Mart parking lot. Once again, this was all over the news.

If white males are, in fact, the main terror threat this country is currently facing, how many billions of dollars, post 9-11, had to be spent on security measures to achieve this? It certainly didn't happen by accident. Had those billions of dollars been aimed at neo-Nazis and other white hate groups, you can be sure that they would’ve been rendered harmless by now, as the actual threat they pose compared to ISIS and Al Qaeda is minuscule.

It's important to examine the meaning of the word "threat" in this context. Do we measure the threat level by the body count over a certain period of time, starting the day after nearly 3000 people were murdered, or is a more accurate measure the enormity of the resources that must be spent on containing it? There is a man named Ibrahim Al Asiri, known as the bomb "genius" of Al Qaeda in the Arabian Peninsula (AQAP), who reportedly spends most of his waking hours looking for ways to bomb American planes and buildings. In his spare time, he teaches others how to do it in his workshop for young bomber apprentices. Is there a homegrown American terrorist counterpart to Al Asiri hiding out somewhere in Idaho? If the person AQAP had chosen to take one of his tiny bombs aboard an American airliner in 2012 hadn't turned out to be a Saudi intelligence agent, the New America Foundation's figures would tell a different story today, and that’s just one example of the many terrorist plots coming from the Middle East that are foiled by good intelligence and other security measures.

White liberals find it difficult to say that people who may not have white skin, or may be Muslim, could possibly represent more of a threat to the U.S. than their own demographic group. It offends their sense of fair play, distorting the clarity of their vision. They could benefit from studying the history of terrorism. In the 1970s, the most fearsome terrorist organizations included Germany's Red Army Faction (aka Baader-Meinhof gang), Ireland's Irish Republican Army, and Italy's Communist Red Brigade. Terrorism goes in cycles. Back in those days, it was white people who were doing it. Now it's ISIS and al Qaeda. It doesn't mean white people were "bad" back in the 70s, any more than it means Middle Easterners are "bad" now. It's merely a matter of fact.

If ISIS or al Qaeda could obtain a nuclear bomb and set it off on Wall St. tomorrow morning, they’d do it. If they could easily sneak bombs aboard American airlines, they would blow planes out of the sky every day. American white supremacists or anti-abortion terrorists and the other fringe groups, on the other hand, are not looking commit crimes of this magnitude. ISIS's ultimate goal is a global caliphate. One of AQ's main goals is to kill as many Americans as they can. It couldn't be any clearer that this is where we find real threat facing the U.S.

ISIS burns people alive in cages and crucifies children for not fasting during Ramadan. They say they’re going to carry off a Paris-style attack on the U.S. soon, and I believe it. If you think Stormfront and similar white-power groups represent an equal threat you’re confused and probably reading too many Salon articles. ISIS is now trying to convince American citizens living here and sympathetic to their cause—the so-called "jihobbyists"—to buy easily available guns and shoot up crowded public places. It's a strategy known as "leaderless jihad," and theoretically not too difficult to effect, as no training in the Middle East is required. Pretending that the real terrorist threat facing the United States is from people shooting up abortion clinics or movie theaters is a dangerous, naïve delusion that can lead to the complacency that gave us 9-11.