Rove vs. Trump: Can’t They Both Lose? 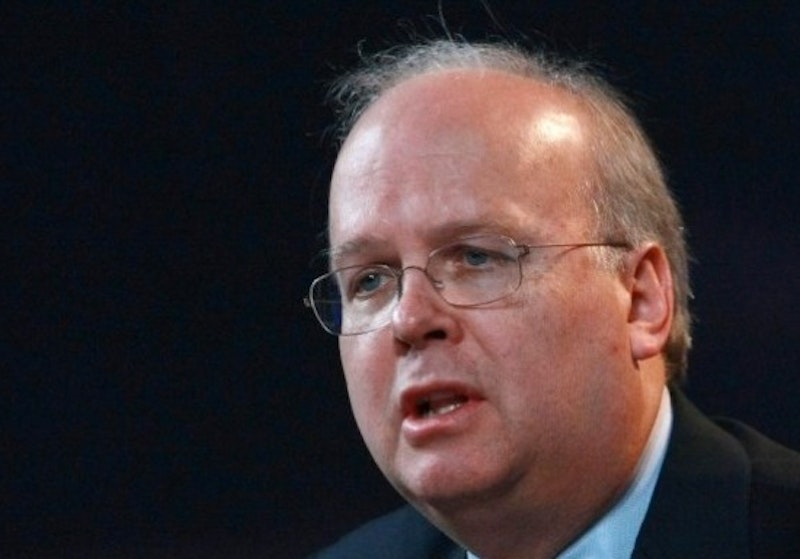 It’s all a bit sketchy, but few reports have made me more weary to the depths of my soul than the Bloomberg Politics piece about Karl Rove helping put Ben Carson’s people in touch with politically-ambiguous mega-donor Steve Wynn, possibly just to give Wynn’s rival casino magnate Trump a hard time.

I mean, think how many layers removed from pure political principle that is. The arch-Machiavellian—who advised a recent big-spending, government-expanding administration—may help a casino magnate (who sometimes donates to Democrats) use a religious nutjob as an obstacle to harry the other casino magnate (who sometimes donates to Democrats, too). Does this bear any resemblance to what conservative activists had in mind the last time they rendered a policy opinion? Is there even a faint echo of hope in any of that?

Rove has long been an unprincipled menace, of course, sort of the Henry Kissinger of domestic politics. He was basically the guy who realized that if Americans have a paradoxical love of big government spending and lower taxes, George W. Bush could be very popular by embracing both policies at the same time. Fiendishly clever, and terrible for the economic long term, obviously.

Rove is also the man who, despite reportedly being an agnostic himself (or perhaps precisely because he’s wishy-washy?), convinced a reluctant and basically tolerant Bush that denouncing gay marriage would help get religious supporters to go to the voting booth in 2004, swelling the Bush vote. Can’t argue with that cold-blooded, egg-shaped, bespectacled number-cruncher. And if a decade later gay marriage is legal throughout the land anyway, no biggie. The establishment got through that 2004 trouble patch okay, fate of society be damned. And hey, maybe Carson as a v.p. will keep those disappointed fundamentalists happy next time around, right, Karl?

Not that Rove knows all, as the numerous failed pro-establishment candidates he helped back (with embarrassing, tin-eared ads) during the Tea Party’s triumphant rise show. Retire, Karl.

If Ted Cruz, who in Iowa is now surpassing Carson and vying with Trump, crushes all of these people, he’ll deserve our thanks, whatever other horrendous mistakes he makes later. The buffoons and the establishment collaborating to destroy each other with the relatively bearable Cruz surviving would be an unexpectedly pleasant outcome.

And if Cruz (or someone else with brains and principles) can’t pull that off, what on earth do any of these donors and smart advisors imagine a Carson or Trump future for the GOP looks like, anyway? A few marginalized idiots complaining about President Clinton for the next eight years? Is that what passes for high-paid strategy now? Sounds more like the end of conservative politics.