Progressives, say the economistic right, hide behind altruism but advance their own selfish interests. 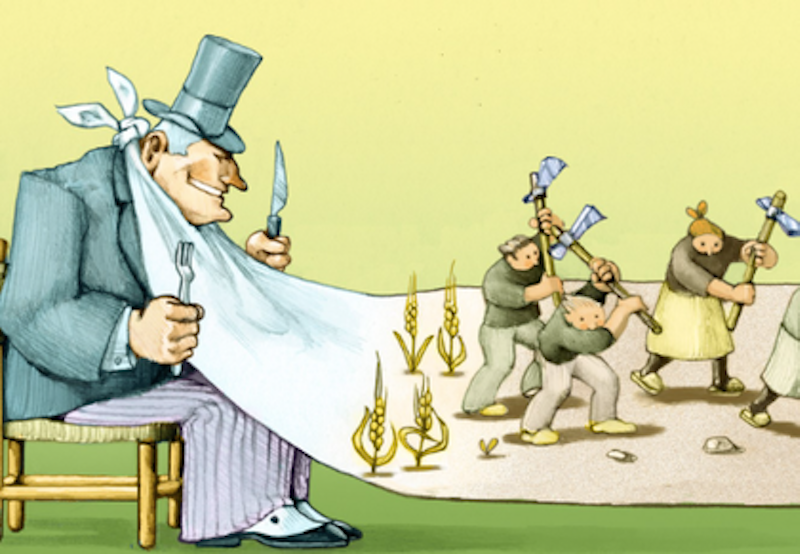 There’s growing tension between the populist and the “basic bro conservative” right. The latter is fixated on allegedly dead notions like individualism, pluralism, small government, hawkish patriotism, and a preoccupation with matters mostly of interest to business owners. (Things can get fuzzy however, e.g. with the far-right’s glomming onto Bitcoin, a seemingly “economistic right” thing to do.)

If you thought wearing your Christianity on your sleeve was a “basic bro” Reaganite action, you’d be wrong. Curiously, wrong. It’s the populists and fans of First Things’ Sohrab Ahmari who are into that, and with gusto! In the eyes of these “tradicals,” the moribund 1980s brand of Christianity holds to a naive notion of separation of church and state—and to a cultural notion of espousing religion while living capitalism—that makes the so-called dead consensus ill-equipped to deal with a hegemonic left-wing adversary that is now ensconced in Big Corp. (And to a lesser extent, modernity itself, regardless of the left/right dynamic.) For the illiberal right, classical liberalism always seemed to miss the mark, but in 2019 the dart is missing the board. CL’s “little platoons” orientation feels far too quietist. Their Tocquevillian defense of civil society—buttressed by glowing ruminations on the “free” society (read: free market society)—couldn’t exist at a worse time, say the trads, with techno-commercialism driving a weaponized progressive groupthink that spares nobody.

But the fight facing the tradicals is more difficult than they know, and for reasons going beyond the realpolitik of Really Existing Capitalism. Think tank donors, and everyone else enmeshed in the status quo. Classical liberal thinking—suspicious of romantic collectivism, reductionist, and increasingly informed by Darwinian materialism—is embedded in the right’s worldview. If not the right en masse, then at least among the more influential business conservatives (and would-be business conservatives) who adhere to data-driven cognitive elitism, in effect if not intention.

Take the term “virtue-signaling.” Its life began in evolutionary psychology departments, and is at heart an “economistic right” notion, contra the romantics of all stripes. In workaday deployment, it’s overwhelmingly lobbed at the left, and its rhetorical heft derives from the notion that the left is insincere. Progressives, say the economistic right, hide behind altruism but cryptically advance their own selfish interests. It’s the argument, long made on the right, that selfishness ultimately rules, and that altruism is a shady trick.

The notion of virtue signaling is warmed over libertarianism. It’s a 21st-century talking point for the 20th-century Milton Friedman-esque Anglophone right, and a powerful form of ammunition in their battle with the left, in both its traditional and intersectional variety.

Ten years ago, I was involved with the gadfly libertarian journal Critical Review, run by the out-of-sight Jeffrey Friedman (no lover of podcasts and YouTube, he). At the time, he was involved in an intellectual feud with George Mason University economist and open borders libertarian evangelist Bryan Caplan over the concept of “rational irrationality.” RI is the idea that people think politically, yes, but lazily, because it’s not in their material interest to delve deeply into political issues they’re asked to weigh in on in a democracy. Thinking sloppily about politics (irrationality) can be defended as a rational act, however, because what skin is it off one’s back if they’re wrong; and more importantly, how would they even get “wrong” feedback given the tenuous link between their individual political decisions and social change? It makes sense to learn only as much politics as wins you approving attention, but no more, consistency and policy facts be damned.

Friedman’s gripe with Caplan is too arcane to detail here, but they’re in agreement with the more general “economistic right” in proffering a ruthless stripping away of the spirit of democratic enchantment, to expose people as they really are: small, localized, ignorant organisms spitting at the continental drift of politics. It’s a relentlessly anti-populist ethos.

RI is a kind of predecessor to virtue signaling, offering a largely individualistic and instrumentally reasoned approach to politics. It’s handmaiden is a general cynicism about motives, and a compulsion to swat down any high falutin’ political rhetoric with a cadence. Its effect—which is far broader than those who refer to themselves in terms of “left” and “right”—is to render us too disenchanted to chant in unison.

The tradicals and populists who’d prefer to see the right lean into solidaristic passion against the mechanistic, spiritless and bean-counting right have a nearly impossible task ahead of them. The smartest, most powerful segment of their potential constituency simply knows too much, can connect too many data dots, and is too suspicious of broad, emotion-laden appeals to be on board. To the economistic right—adherents to the dismal science that’s allowed them to be the grown-up in the room in their fight against the left—giving in to the New Right would mean giving up a powerful intellectual edifice they’ve fought long and hard for to “beautiful losers.”

The Heritage Foundation’s bookshelf may be moribund to the upstarts on the right, but to multiple generations of right-wing econ nerds, philosophers and Big Corp. whisperers, it’s a display case for sacred scrolls.