We finally have someone who seems like a movie-of-the-week villain. Off with his head. 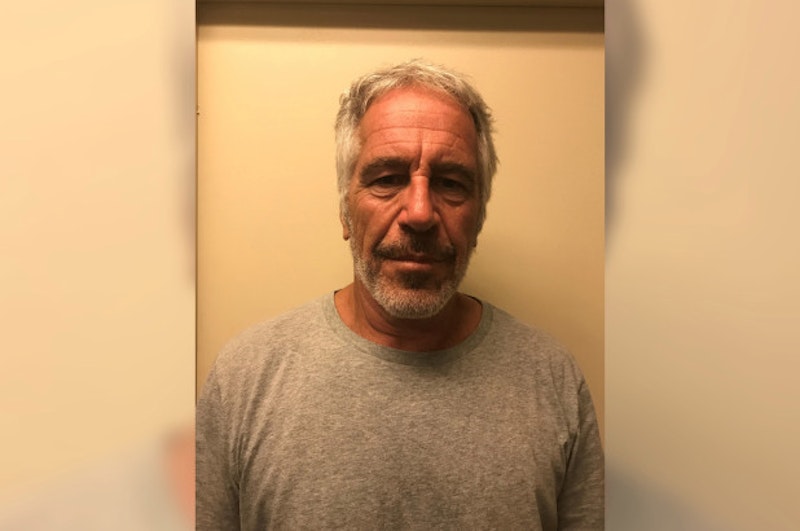 The level of hysteria and groupthink surrounding Jeffrey Epstein is disturbing, if not surprising. I thought I'd seen everything after the Trumpification of the 24-hour news cycle. But here comes the breathless torch-and-pitchfork crowd, giving an already irresponsible media even more reason to churn out lurid speculation as if it were straight-faced reportage. I don’t condone Epstein’s alleged crimes, but that’s beside the point.

I probably wouldn’t like him even if he hadn’t been accused of child sex trafficking. He reinforces a lot of stereotypes: the rich white guy who seems to behave like he's above the law, is connected to power, and has a record of buying his way out of problems. Who does that remind us of, by the way? Well, I dislike him, too.

Epstein has a criminal history, is a repeat offender, and has not been held to the same standards of other (less affluent and connected) criminals. If he’s guilty of child sex trafficking, he should be held criminally and socially responsible. If the system is manipulated by a man with a lot of money who can call in favors, that needs to be addressed, but there are reasons we have laws and due process. A good one is that mob justice leads to unforgivable mistakes, social decay, and vast injustice. It is, in itself, a type of criminality. Too bad the media is salivating over Epstein and stoking bloodlust across the Internet. We finally have someone who seems like a movie-of-the-week villain. Off with his head.

Twitter is particularly vicious at the moment. People are calling for castration, execution, torture—first for Epstein and then for whoever they happen to dislike—Trump, Hillary, Mitch McConnell, all Jews, all rich people, all white men, all men in general, liberals, “the establishment.” In this scenario, maybe someone gets guillotined at Place de Grèves simply because he’s a filthy decadent aristocrat with a bad reputation. Even if the right filthy decadent aristocrat gets it now, mob rule opens the door for others to be unjustly harmed later.

Today, we all feel good because we exacted righteous vengeance on Epstein, a wealthy, arrogant, social deviant sure to be associated with someone else we happen to hate. Tomorrow, we’ll feel equally good when we do the same thing to another person we don’t like, only the evidence of that person’s crimes may be a bit flimsy. The day after that, we may not have any evidence, but we’ll roll out the guillotine all the same because it’s all about protecting the children. This is how society falls apart. Hysteria doesn’t help. It only makes things worse. And violence, like those who are violent, comes in all shapes and sizes. Due process is the only way to keep a government and its people from the unjust application of punishment.

Years ago, I worked as an assistant to a public defender in southern California. During that time, we encountered many vile, disturbing, even nightmarish crime scenes and represented those accused of creating them. But one thing we could never determine was the guilt or innocence of a client just by skin color, criminal history, personality, or financial profile. All of these things could be probative to some extent, but none were ever definitive or ultimately very useful. Some of the most prolific and violent killers have been great conversationalists, lacked documented criminal histories, and were considered productive members of society.

In my time as a legal assistant, I interviewed tearful gang bangers who’d shot their friends or families while out of their minds on drugs. I ran errands for a kid being held at California Youth Authority for chopping up the guy who’d been raping him for years. I chaperoned a psychologist brought in to determine whether a felony murder defendant, who had an IQ of an eight-year-old, actually knew what he was doing when burned down half a city block. I visited people on death row and carried their letters to their families. Sometimes, I was the closest thing to family for them so they wrote the letters to me. I brought cups of coffee to toothless women in chains awaiting arraignment. I sat at the table with a serial killer and talked about Monet’s water lilies.

Rapists, murderers, arsonists, prostitutes, addicts, violent schizophrenics, the beaten and maimed, the homeless, the lost and the overlooked were our clients. We defended people who’d joined gangs often to make a horrific situation slightly less horrific. We defended drug addicts looking at 20 years on a third strike for stealing. We defended those whose bodies had been violated so long that it had become their way of life. We weren’t trying to put the guilty back on the street. We were actually trying to save lives by ensuring that the justice system functioned properly.

Someone like Jeffrey Epstein would never have been sitting in our office, but when I look at the news stories about him and read his background, I wonder what led him to this, what judgment calls seemed reasonable and productive to him along the way and why. He has a criminal history as a sex offender. So part of his behavior will make sense in terms of his record of convictions. Still, I can’t help but remember some of the clients we had and wonder, had they possessed Epstein’s resources and connections, whether they would have developed the same sort of rap sheet. They might not have. Or they might have been far worse than they were. The point is, there’s no way to know.

A number of our clients were falsely accused. Many weren’t. Though, on some level, all of them were motivated by self-preservation. Trying to survive on the street (even if that has turned you into a predator) and getting arrested tend to correlate more often than not. Some of our clients were clearly insane from childhood or cognitively impaired or damaged in other less obvious ways. Others were lacking fundamental psycho-social components that we take for granted. But none of them were evil and the line between perpetrator and victim was often unclear. Usually, it was one victim hurting another victim. Or it was someone whose circumstances and experiences had led them inexorably into a life of crime with few alternatives or ways to escape.

Moral arguments exist in closing arguments, in the media, and in the philosophy classroom. On the street, right and wrong usually come down to live or die. Most choose to live, even if that means others have to die. That’s not right, but it is the situation. So I distrust instances where the moral high ground seems easy and obvious, even when it comes to defendants wealthy and arrogant enough that their comeuppance would seem gratifying to the mob. The victims deserve justice and society deserves it, too. But I’m not sure screaming for torture and death is a step in that direction. Black and white moral distinctions are the province of Superman and Sunday school. The rest of us don’t have the luxury of such an over-simple perspective.

I didn’t believe in evil when I was a legal assistant and I still don’t. In any case, it wouldn’t have been up to me to decide anything back then. My job was to get the coffee; go to the library and research; prepare certain documents; listen to the client’s concerns; provide moral support to the families of the accused; and sometimes pick up someone’s ancient grandmother so she could visit her son in jail. I was instructed to do all this with as much efficiency and discretion as possible. I moved fast, got things done, and was able to find kindness in myself towards people in a bad situation, no matter how repellent they were or what they had or hadn’t been accused of doing.

Sometimes, the public defender asked me to look up a joke and tell it to him. He used to say that when he could no longer laugh at least once a day, he’d retire and coach little league. I could appreciate that, but I could also see how good he was at his job. He was a man on a mission to keep the DA’s office honest. He was an idealist. And to the families of those accused of committing horrible crimes, he was like a saint. He made me a believer—not in our broken, insane, deviant clients or in our broken, insane justice system, but in the value of at least keeping the torches and pitchforks at bay until guilt or innocence can be established.

Every part of me wants to see Jeffrey Epstein get what’s coming to him. But I have to admit I don’t know what that is or what it should be, and neither do the media personalities inciting their thoughtless reactive audiences just to generate sensational buzz. Looking back at Epstein’s storied history of lawsuits and allegations, it’s clear there’s something wrong with the man. But before we start setting up the guillotine in the town square, we should admit that mob justice is no justice at all. And any punishment, however deserving, meted out on that basis shortchanges Epstein’s victims and perverts the rule of law.