Perhaps Rodger and Aghdam are hanging out in digital heaven or hell. 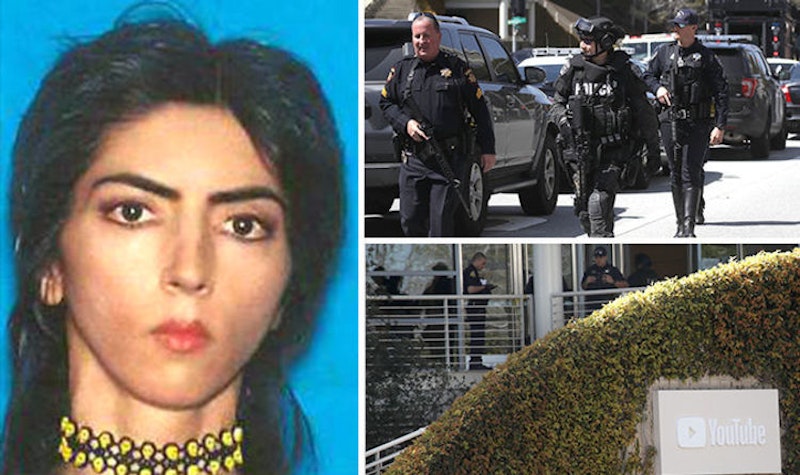 Elliot Rodger was disgusted by the oversexuzled whorification of human sexuality. He complained about how each body was a vessel to be fucked for points in the status competition of alpha superiority. A Houellebecq without talent, Rodger was on a road trip to nowhere, and was publicly viewed as a misogynist loser rather than a hater of all things sexually public and commodified. “Why couldn’t he have just gotten a hooker?” people like to ask. He didn’t want one! That’s why. Elliot Rodger didn’t want a hooker. Elliot Rodger wanted a Barbie.

Elliot Rodger probably would’ve gotten on well with Nasim Aghdam, who shared many of his views on censorship and cultural decline. A fellow psychopath and lunatic, Nasim was a vegan extremist who shared Rodger’s views on alienation. Meanwhile, Elliot Rodger had no idea that Nasim Aghdam existed. Why would he care about a weird girl like Nasim? She was just another trad thot trying to get attention through her YouTube channel, right? Just another attention whore? Just another grifter? Until suddenly she crossed the line into meme territory and now she was a total goddess and suddenly things were different, right? Suddenly the game was on a higher playing field, wasn’t it?

Perhaps Elliot Rodger and Nasim Aghdam are hanging out together in digital heaven or hell, depending on where you stand on the sociopath alignment spectrum.

Nasim Aghdam was sick of being censored for her content. She dedicated her life to making content for the world to see, yet nobody wanted to watch. Nevertheless, it was everything to her. She cared little for popular trends, and everything for making a name for herself in a non-caring society. Possibly schizoid and completely on the level, she made no attempt to become a Barbie for the “perfect gentlemen” of the world. Nasim simply did her thing, despite the social consequences of this. She fought till the end, and till the end she carried her torch.

Extremists are alienated members of society who share a dark knowledge of esoteric subjects that well-adjusted members of the public are unable to comprehend. This creates these shared feeling of companionship. Even if Elliot Rodger would’ve met a Barbie, there’s no way the Barbie would’ve been able to understand him like Nasim. Would anybody have been able to understand him like Nasim? Weird people need to date other weird people. They can work on improving themselves together, and pretending to be normal for the press, but at the end of the night they’re going to need someone to actually talk to.

We should all seek to talk to incels and vegan extremists. Let them know that we hate the Barbies as much as they do, and that we stand against censorship of weird vegan music. We can all do our part to stop the future murderers of the world if we lend a helping hand. What if Elliot Rodger met Nasim Aghdam? What if Nasim Aghdam met Elliot Rodger? How many lives could have been saved?