Get Out of There

The establishment’s collapse is just beginning. 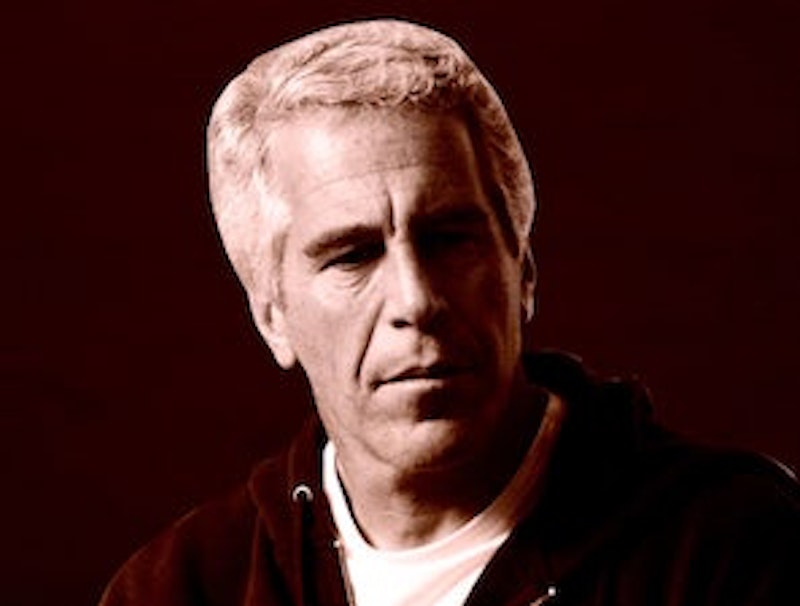 It was nice of Nancy Pelosi’s documentarian daughter to weigh in on the re-born Jeffrey Epstein scandal, saying we should hope justice is done to the victims of his underage sex-trafficking network whether his collaborators and protectors turn out to be Democrats or Republicans. His ties to the liberal political, media, and academic establishment(s) appear far more elaborate and extensive than his minimal ties to Trump, so the more liberals go on record calling for impartial investigation before this gets too politicized, the better.

Then again, with James Comey’s daughter one of his new prosecutors, maybe the whole thing is already a carefully orchestrated political charade. Who knows, but you’d have to be very naïve or dogmatic at this point to insist that surely the wheels of justice are grinding along in objective, impartial fashion (a decade and a half after his plea-bargain for sexual contact with minors but, as if by an astonishing coincidence, only about two days after Mike Cernovich and Alan Dershowitz’s pressure helped get the records of that earlier trial made public, potentially embarrassing as many celebrities and power-brokers as Epstein’s private jet’s flight logs do).

I’m going to have to start assuming that people who still say “conspiracy theories” in a condescending tone haven’t really read the news much the past few years, in any case.

But what really makes me optimistic, no matter how ugly the impending revelations might get, about this juncture in history is the thought that society’s evil sectors may all be houses of cards as easily toppled in this era of transparency and social media as Epstein’s world probably soon will be. I hope there are people in numerous well-protected but corrupt corners of this civilization, perhaps too young to have concluded there’s no hope or too old to care about playing it safe anymore, thinking something like, “I should really blow the whistle on all this before someone else does and I get arrested along with my bosses.”

Are you in TV news? Aerospace? Law enforcement? Education? A church hierarchy? A corporation with a big lobbying budget? I’ll bet hundreds of thousands of you have stories to tell, shocking stories that would morally educate the world, with the realization still just dawning on you, this early in the 21st century, that it’s getting very, very difficult to completely shut up someone like you nowadays. How wonderfully destabilizing and good it would be if you all started to sing at the same time. That’s the sound I’d like to hear our society make, not hush noises. Don’t worry. Eventually, the screaming will die down and a better world will quietly emerge. In the meantime, blow that whistle. Blow, blow, blow.

Two other reminders this week that it’s the subversives we value in the long run, not the secrets-keepers and straight-face-maintainers: first, the world mourned the passing of Mad, arguably the most subversive part of the EC Comics stable (one since turned into part of DC Comics), even though the authorities foolishly thought they’d clamped down on EC’s most subversive output in the 1950s by pressuring the company to stop selling horror and crime comics; second, Arte Johnson passed away (since he was in his 90s, the fact he’d still been alive was probably as surprising to some as it was to hear auto tycoon Lee Iacocca just died), having been a living tie to the days, only a half-century ago, when doing sketches on Laugh-In hinting at drug use was enough to rattle the establishment’s cage. We can demand far more truth-telling than that now, I think.

You won’t hear any blanket endorsement of the left from me, but subversion of the kind that encourages openness and decentralization has, on balance, worked out fairly well for the world.

For a vivid fictional reminder of what the opposite looks like—secrets, insularity, groupthink, indifference to the fate of outcasts—you can always check out the fine new thriller Midsommar, about a ritual death cult in Sweden. It feels otherworldly and slowly trippy, but the really unnerving part is how much its glassy-eyed true believers acting in gentle unison will remind you of Occupy Wall Street call-and-response chants, more than one hip music festival, many corporate pep-boosting meetings, every church congregation, voting, and the whole experience of being trapped on Earth with other people in general.

One reason we must mock groupthink and expose the crimes it facilitates is that the group rarely makes escape easy. You should be able to drift away and do your own thing, as well as speak your mind to those interested in listening, but we still live in a world where, for instance, Thailand threatens people with the death penalty for the ostensibly treasonous crime of seasteading—that is, simply living out on the ocean, away from land-based law enforcement.

And don’t kid yourself that it’s only distant Asian nations who look upon peaceful sea-dwellers and react with hate: American left-wing columnist Amanda Marcotte once likened seasteading to rape, claiming it was all but inevitable that mail-order brides would be exploited by seasteading men once they were away from the loving, protective eye of the land-based state. That heretic-hating authoritarian impulse, which can’t abide the thought that decent, non-violent people might want to go their own way (might even want to go way out at sea to do so), is the reason you ended up with armed helicopter raids on California hippie communes 40 years ago or police bombs dropped on the black business neighborhoods of Tulsa 98 years ago.

Yet on the fancy, respectable Upper East Side of highly civilized and thoroughly policed Manhattan, Jeffrey Epstein apparently lured 14-year-old girls into sexual assaults. Turns out the familiar, establishment-approved island of Manhattan is more dangerous than a fringey libertarian seastead. We ought to start talking more honestly and openly about that fact, and many others. This civilization is a menace, and it deserves to be unmasked.