Trump and the Widow

And the mess we’re in. 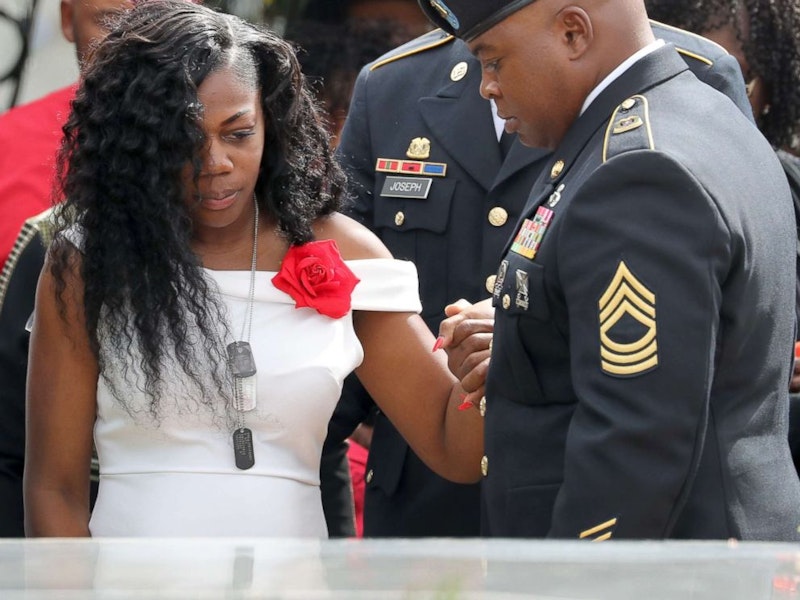 Has there ever been a president who called a serviceman's widow and made her feel worse? Ever? Well, now there is. And he did such a lousy job because she's black. Trump saw the names La David and Myeshia and that was it. He went on cruise control, gabbing with an eye on the TV or his secretary’s backside. When time came for the President to sum up La David Johnson’s life and sacrifice, the words supplied by General Kelly didn’t come off right. “I guess he knew what he was signing up for, but it hurts anyway,” the President said.

“It made me cry because I was very angry at the tone of his voice,” says Myeshia Johnson. As to the dead man’s name, there was no chance. “I heard him stumbling on trying to remember my husband’s name,” Mrs. Johnson says. “And that’s what hurt me the most, because if my husband is out here fighting for our country, and he risked his life for our country, why can’t you remember his name?”

Yeah, why couldn’t he? And why is John Kelly so sure that Rep. Frederica S. Wilson, a black woman, was acting noisy and full of herself? Notice how Obama is played up in Kelly’s memory. The videotape shows the real-life congresswoman bringing up John Boehner and Marco Rubio—both Republicans and non-black—and the fine things they did. Kelly remembers a black woman boasting about how she and a black man called the shots. I suggest that this picture is a bit of a nightmare for him.

Finally, why did Donald Trump’s son tweet about Maxine Waters and her hats, given that she doesn’t wear hats? Because Frederica Wilson does. Why is that enough? Well, you know.

Turning point. Barry McCaffrey, retired general and ex-chief of the federal anti-drug effort, says we’re all nuts for obsessing on the Trump phone call.  “We’re cruising toward a war with North Korea, and for eight days we’ve watched inane behavior by the president, Congresswoman Wilson and the chattering class in Washington,” he says. I have to disagree. The cruise has something to do with the President and his behavior, and the Johnson affair shows up this behavior in a way that most of us find easy to understand. Further, the episode shows us something about the country’s situation.

For 70 years or so, much of America has told itself that the country cares as much about blacks as about whites, or that it ought to. The military has been held up as an example of America functioning non-racially and well. A black who served could go as far as any white and would be treated just the same. Now this: “He risked his life for our country, why can’t you remember his name?” Having Trump as president has caused grievous strain for various beliefs that hold the country together. With the Johnson affair, we’re seeing one of those beliefs tear at the seams. Important as North Korea is, I’m wondering about Fox. How soon do we see photos of Mrs. Johnson out on the town while her husband was deployed? “Looks like the Widow Johnson knew about a good time,” suggests Jesse Watters or Kimberly Guilfoyle. We may have the first smearing of a Gold Star widow, and she’ll be black. If so, we’ll find out how many white Americans care a lot about race and not so much about the country’s core institutions. We already know the President is one of them.