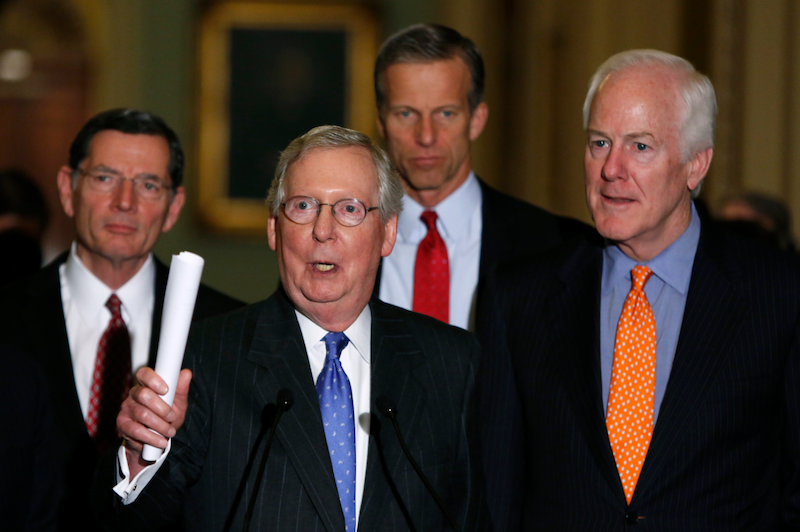 Last week, in a reasonable mood of holiday cheer, I wrote an article about The New York Times’ precarious financial situation, and that despite its employment of loons like Paul Krugman, it’d be bad for America’s media if the institution was further degraded by a vast reduction of staff. (As always, it’s the lower-paid workers who are let go or bought off, and not the expensive, and journalistically spent, op-ed columnists.)

I haven’t changed my mind, yet it’s no wonder the Times is, day-by-day, boxing itself into a left-wing corner, Michael Moore-territory, and if the company wants to restore a semblance of credibility it really must re-jigger its editorial page. On Christmas Day, the lead editorial, in ruing Donald Trump’s imminent Supreme Court choice to replace the late Antonin Scalia, stated that the empty SCOTUS seat was “stolen” from President Obama by the Republicans in general, and Mitch McConnell and Charles Grassley in particular. That’s a lie.

I didn’t support the GOP’s refusal to even grant nominee Merrick Garland a Senate hearing, believing it was not only bad politics in an election year, but also unfair to Obama and the American public. There’s no question the GOP-controlled Senate wouldn’t have confirmed Garland, so what was the harm in at least allowing the man the courtesy of an up-or-down vote? Naturally, all during the fall, when it appeared Hillary Clinton would defeat Trump—and probably nominate someone more liberal than Garland—the Times didn’t cause a rumpus about the vacancy. But it was a decision the GOP leadership made, for better or worse.

Now that Trump is all but certain to tap a conservative man or woman, suddenly the snub of Garland is “theft.” In fact, the GOP broke no laws and it was the Party’s choice to play obstructionist hardball with Obama. But acting in an unusually partisan manner may be dirty pool, but it’s not grand larceny. The editorial writer says: “It certainly obliterates a well-established political norm that makes a functioning judicial branch possible.” The Times still hasn’t caught onto the fact that nothing in politics is normal anymore, not in the new reality that long-standing traditions mean little more than a cashier replying to a customer’s “thank you” with “no problem” instead of “you’re welcome.” It’s true, as the editorial says, that the GOP may come to regret this decision, when the inevitability of the Democrats controlling both the White House and Congress occurs, but that was a political gambit McConnell and Grassley chose. Is publisher Arthur Sulzberger Jr. going to call for a citizen’s arrest of these two varmints?

As if Trump follows advice from the Times, the editorial continues that the President-elect ought to pick a centrist for the Court, because “That would be an appropriate gesture from a man who lost the popular vote by more than 2.8 million votes and will enter office with the lowest approval rating in recent history.” So what? It’d suit me fine if a change from the Electoral College to popular vote in presidential elections happened, but both Trump and Clinton played by the rules currently in place. Oh, one more silly statement: “The shameful, infuriating actions of the Senate Republicans won’t be ignored in the history books.” Well, then, matter settled: McConnell certainly wouldn’t want to be slagged by a hack like Douglas Brinkley.

Rather than continuing to cry in their herbal tea, it’d be refreshing to see editors and columnists at the Times, which still has a large circulation, accept the reality of a President they despise and move on.