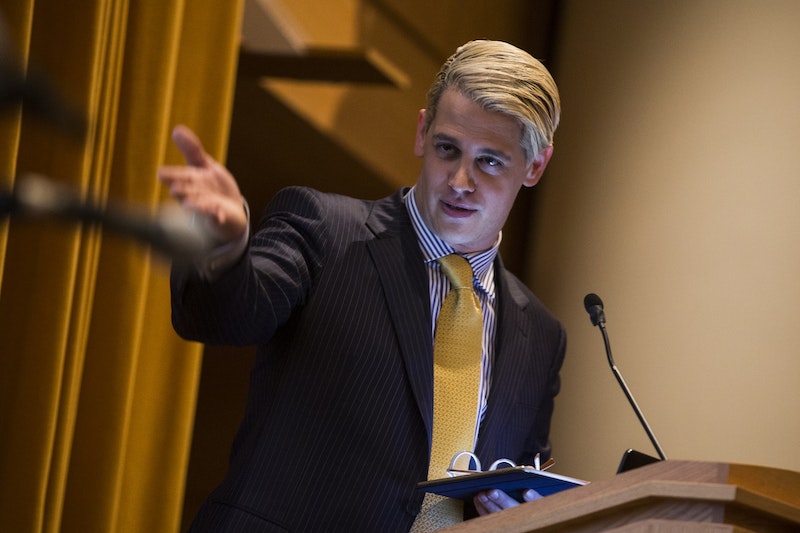 Alt right neo-Nazi supporter Milo Yiannopoulos has received a $250,000 advance to write an autobiography from Simon & Schuster imprint Threshold. In response, many people have called for a boycott of Simon & Schuster. The Chicago Review of Books pledged not to review any of the publisher's books in 2017.

There's been the inevitable backlash to the backlash. Political commenter Josh Barro expressed concern on Twitter: "Milo is awful and I'm sure his book will be stupid. But pressuring publishing houses toward viewpoint restriction leads somewhere bad." For Barro, the issue is one of free speech; Yiannopoulos promotes a vile ideology of hate, but no one should be silenced because of their opinions.

What Barro’s missing is that the call to boycott Yiannopoulos is not about what he says. It's about what he does. The market is filled with hateful screeds by bigoted right-wing assholes. Ann Coulter during the election seriously suggested that only people with four grandparents born in the US should be able to vote, harking back to Southern Grandfather laws used to prevent black people from voting. Yet there are no serious boycott campaigns against Coulter's publishers. That's not because Yiannopoulos' boycotters are hypocrites. It's because Yiannopoulos' work, if you want to call it that, is substantively different from Coulter's.

That difference was on display in a public appearance by Yiannopoulos at the University of Wisconsin-Milwaukee. During his talk, Yiannopoulos showed slides of a trans woman who attended the university. He mocked her, used her dead name, and called her "a man in a dress" and "it." He singled her out for ridicule and humiliation, thereby encouraging his audience and fans to ridicule and humiliate her.

This isn't an aberration. It's what he does. His writing at Breitbart—the white supremacist alt-right supporting hate site edited by chief Trump adviser Steve Bannon—is article after article of deliberate, targeted harassment. Yiannopoulos mostly focuses on individuals with a social media presence, but without strong institutional connections—people, in other words, who are visible, but who lack the resources to sue. Then he writes hit pieces that sidle up to the line of slander, or sometimes inch over it. He outs trans women. He accuses people of pedophilia. In one case he interviewed a woman's neo-Nazi ex in order to get details about her sex life and broadcast them. His articles inevitably result in a slew of harassment on social media, including rape and death threats and escalating slanders. That's why Twitter threw him off the platform—after he launched racist smears against Leslie Jones, a target big enough for people to notice.

I don't really care about whatever opinions Yiannopoulos expresses in whatever book he writes. But he uses his platform to target and harass individuals who have little ability to fight back. In doing so, he chills speech. Even in this essay, I'm reluctant to link to Yiannopoulos' articles, or to name the individuals he's attacked, because singling them out has the potential to reawaken the social media hordes, and re-victimize them. Yiannopoulos works to create a climate in which marginalized people on the left know that they could become a target if they speak up; if you're a vocal figure condemning racism or sexism, he could write an article (or five) about you, signaling hundreds of followers to seek out your address, hack your files, and fill your inbox with filth.

Maybe Simon & Shuster's lawyers will keep Yiannopoulos from using his book to perpetrate these kinds of attacks. But what about his book tour? And how much worse can his attacks get if he gets more power and more validation?

Yiannopoulos parades himself as a free-speech warrior, but his whole career is dedicated to shutting down speakers he doesn't like through targeted harassment and the edging-up-to-explicit threat of violence. Fascists are a threat to free speech. That's one of many reasons to resist them—and not to give them cushy book deals.