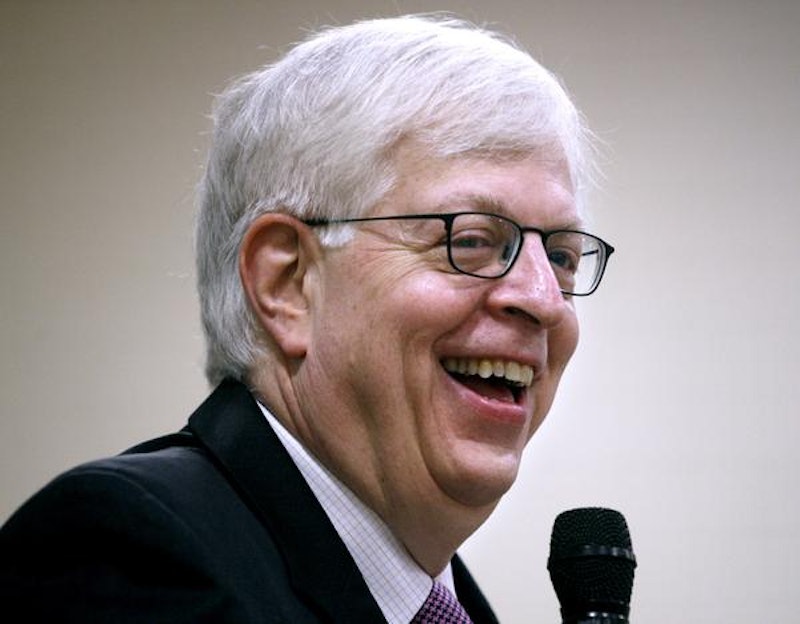 Conservative Dennis Prager recently wrote a couple of essays for the National Review that I find incredibly strange. The first was a defense of Donald Trump against charges of misogyny, arguing that because objectification of women is a normal male activity, his behavior doesn’t prove that Trump hates women. In a follow-up piece, Prager attempts to refute critics by saying just how normal he believes men’s sexual objectification of women is. The end result is that he makes arguments that manage to be unfair to both women and men.

To objectify someone is to reduce them to something with no personal agency. True sexual objectification is embracing only a person’s sex appeal, and disregarding the rest of their humanity. Prager frequently conflates objectification with physical attraction. He isn’t alone in failing to make this distinction—I’ve seen writers of all stripes make this error. But these subtle differences are important.

Prager cites the now infamous Access Hollywood outtake as his only example of Trump’s indiscretions. Trump was caught bragging: “I’m automatically attracted to beautiful [women]—I just start kissing them. It’s like a magnet. Just kiss. I don’t even wait. And when you’re a star they let you do it. You can do anything… Grab 'em by the pussy. You can do anything.” Prager describes Trump’s behavior as “crass, juvenile, sexually aggressive, improper, etc., etc.,” but remains incredulous: “But in what way does it demonstrate hatred of women? It doesn’t.”

My answer: yes, it does. It renders the woman’s consent to this activity irrelevant. In Trump’s view, the woman is a passive bystander that his kisses happen to land on, his hands happen to find her genitals. Her wants don’t matter; she might as well be a mannequin. To diminish a woman’s right to her own body in this way, in what Prager called sexual aggression, is an act of contempt. This isn’t the only example of Trump talking about women in this way. He’s also bragged that as owner of his pageants, he would walk into contestants’ dressing rooms, sometimes getting a fully nude eyeful. Such disregard for their privacy and personal dignity, in addition to entitled access to their bodies, is not only contempt, but also suggests some predatory impulses.

This is where I think Prager’s view of what constitutes objectification goes wrong, to the point of being unfair to men. He says, “Every normal heterosexual man who sees a woman as a sexual object can also completely respect her mind, her character, and everything else non-sexual about her. Men do this all the time.” If a man finds a woman sexually desirable, and also respects her non-sexual qualities, he’s not objectifying her. In fact, I’d argue that this makes one an “enlightened male.” Normal men find women attractive all the time and respect their personal boundaries. In conflating objectification with attraction, Prager inadvertently makes the argument that in order to find women interesting, men must first dehumanize them; I don’t believe that’s the argument he wants to make, but that’s where it lands.

Prager also underestimates the nature of female sexual desire, ascribing “the unique power of the visual to sexually arouse men.” He does concede, “Of course, a woman can be aroused seeing a particularly handsome and masculine man. But there are no websites for women to stare at men’s legs or other male parts.” I don’t think Prager is entirely wrong in that this is a more male activity, but he makes light of women’s appreciation for the male form. I think the mistake is looking for an exact equivalent between the sexual interests of the genders; in other words, looking for the wrong thing in the wrong places. Women have made great use of Instagram, creating feeds like “hot dudes in the kitchen” or “hot dudes with dogs.” In the more mainstream culture, the male stripper-fest Magic Mike was successful enough to not only warrant a sequel, but also a porn parody that was actually an improvement. Even within porn, women are not only increasingly part of the audience, but they’re calling the shots behind the camera. The benefit for women is that we no longer have to settle for hedgehogs like Ron Jeremy when someone like Ryan Driller is hot enough to fulfill our fantasies as both Superman and Prince Charming. It’s a great time to be a woman with an Internet connection.

Prager’s strangest argument is, “Most heterosexual women also see women as sex objects—and they are hardly misogynists. Ask your wife or girlfriend which would turn her on more: watching a male strip show in front of a female audience or a female strip show in front of a male audience.” In my own experience, most women who see women as sex objects are viler in their misogyny than most men. In that mode, women equate their self-worth with their outward appearance and fail to cultivate their intellect. The end result is that they view romantic relationships as a zero-sum competition against other women for adequate men. I think it’s overly simplistic to reduce the complexity of women dehumanizing other women to a matter of strip club preferences.

Prager’s subsequent assertions get increasingly personal, and he tries to ascribe his own tastes as universal experience. Despite his earlier skepticism at women’s sexual interests, he appears to be making them responsible for holding their man’s interest in a long-term relationship: “Lucky is the couple in which the man can sexually objectify his partner. The longer a man can at least occasionally regard his wife as a sex object, the better their marriage. It is not always easy to perceive the woman you see everyday, the mother of your children, as a sexual object.” When I showed this to a male friend, who has been happily married for 10 years, he saw this as incredibly cynical: “As if wives are just fighting the ticking of minutes on their hotness clock until he leaves her for a newer, younger model.”

Most men are usually more gracious in how they talk about their wives. Prager’s friend and colleague Hugh Hewitt describes marital life as Christmas everyday because his wife is such a gift. It’s a little over-the-top, but I more frequently encounter men conveying that kind of gratitude for their wives than not.

In the rest of that second essay, Prager changes gears and goes on a rant about the evils of “leftism.” He makes the curious assertion that “avoidance of pain is the central psychological impetus of leftism.” After plowing through complaints about safe spaces, the French Enlightenment, raising the minimum wage, and Islam, he finally concludes that all of this is a pattern of the Left’s pain avoidance: that men seeing women as sex objects is too much for feminists to bear. Again, the problem is Prager’s failure to fully understand the dehumanizing aspects of objectification, and how it relates to deviant, predatory behavior. When you strip away his misuse of the term, the examples he gives earlier are of pleasurable, consensual sex between couples who are in healthy, loving relationships. And that is completely normal.