Teen Vogue writer decides that Fox host is a twerp. 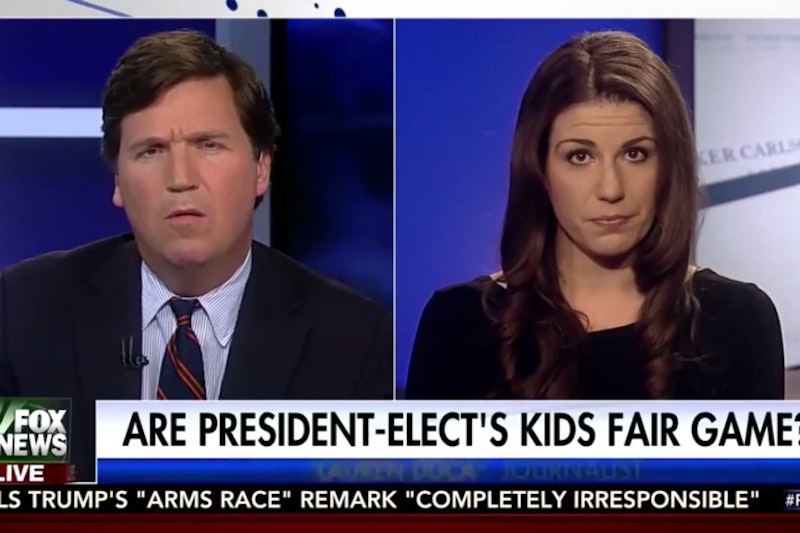 Fox’s Tucker Carlson did score one clear-cut point: “sovereignty” doesn’t mean what Lauren Duca, weekend editor at Teen Vogue, takes it to mean. Of course, playing copy editor isn’t a good way to win an argument on TV. Razzing somebody can do the trick, and that was the point of Carlson’s hooting over the misframed sentence authored by his guest. But razzing doesn’t work unless the victim gets flustered and gives way. Duca remained firm, her attitude clear: she was on Tucker Carlson Tonight for a debate, not some ill-natured nonsense, and she wanted the host to know it.

The intellectual content of the exchange was unexalted. Did Duca think it was a good thing for a member of the public to yell at Ivanka Trump on a Jet Blue flight? Duca said she didn’t. Carlson said she did. He battled to put words in her mouth. She battled, successfully, to keep them out. “Is that what I said?” she demanded as the proceedings heated up. “I think my earpiece must not be working, because that is definitely not what I said.”

So far from being rattled, Duca seemed to come to an on-air decision that her host was a twerp. She popped her eyes and pushed her face forward to indicate disbelief at his pettiness. Then, when he said he was going to pose a question to her, she said that she’d pose a question instead. She prevailed. The question was whether we should know what Ivanka Trump is up to in the new administration. Grudgingly, Carlson said that we should. Then, to cover himself, he sneered at Teen Vogue. This caused Duca to put on a little show about his snottiness. Among other things, she fluttered her hands and then clasped them to demonstrate her amazement.

Carlson proceeded to the “sovereignty” sentence, which runs this way: “There are unprecedented amounts of ugliness to untangle, from deciding whether our President can be an admitted sexual predator to figuring out how to stop him from threatening the sovereignty of an entire religion.” It’s taken from Duca’s article “Donald Trump Is Gaslighting America,” which ran in Teen Vogue under the mysterious kicker “My Life.” There’s no doubt that the article and the sentence are linguistically shoddy. As Carlson indicated, persecution of a religion can’t be classed as a threat to sovereignty, much as grinding somebody’s toes isn’t a threat to the toes’ academic standing. Toes don’t have a grade point average, a religion doesn’t have sovereignty. Duca meant “safety” or “status.” Even then one must question “entire religion,” since only a tiny fraction of Muslims lives in the U.S. or wants to enter it. For that matter, we don’t have to decide whether the President can be an admitted sexual predator. The Electoral College took care of that, with the decision kicking in Jan. 20.

One could go on. Carlson stuck to the “sovereignty” misstep. “What does that even mean?” he said, or hooted, adopting the time-honored approach of sophomores confronted by something they find sophomoric. The tactic did him no good. Everybody knows what Duca meant by the phrase: that the President-elect wants to push around members of a religion. For that matter, everybody knows that the President-elect expresses himself with the precision of mashed potatoes atop mud. Lack of precision doesn’t bother his admirers, so why should it be thrown at his detractors?

Carlson was enacting a charade beloved of the American right: that they are disciplined people with well-honed minds, and that their opponents are self-indulgent buckets of sentiment and received opinion. The right should’ve knocked it off when George W. Bush showed up the faultiness of their decision-making powers. Now they’ve lined up behind the least disciplined person ever to win fame for anything except firing weapons in a crowded room. Their new leader is a creature of appetite and impulse whose mind is just barely honed enough to produce a coherent tweet.

Meanwhile, Tucker Carlson Tonight tries and fails to embarrass a staff member of Teen Vogue. Carlson, that keen thinker, had nothing to use on the girl except his ill temper about wording. His supposed inferior called him to account for being small and footling. “Tucker,” she said, patience growing thin, “Tucker, Tucker. You are talking at this trivial, mundane level of argument.” He’d just been trying to embarrass her for tweeting rude things about Donald Trump.

Carlson spent most of the segment chortling and guffawing at the girl. But in the final few seconds he tried a change of pace. “You should stick to the thigh-high boots,” he told her, because one of her Teen Vogue articles was about that very subject. His face was disdainful, his voice cold. This was the kiss-off. No more fooling around.

Duca still failed to crumple. Instead her eyes popped once again. “You’re a sexist pig,” she said. It was as much of an answer as he deserved. In fact, I really think she had him.