On An American Utopia: Dual Power and the Universal Army, by Fredric Jameson, edited by Slavoj Žižek. 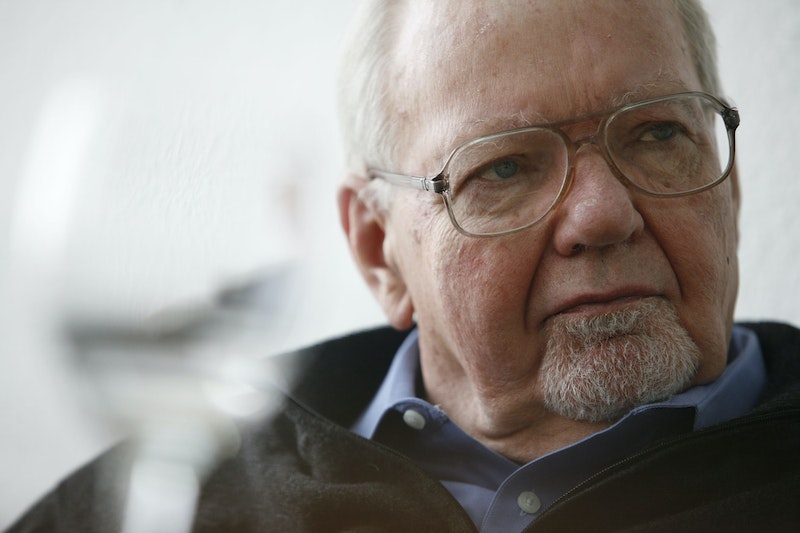 One of the most conspicuous features of the intellectual life of the last century and a half has been the persistence of Marxism. In each generation, new waves of Marxist theory have crashed on the cliffs of capitalism, while often dominating the political discourse of the academy. Sometimes, as in figures such as Gramsci or Althusser, Marxism has been the intrinsic basis of the thought, the spring from which everything flowed. In other cases, as in Sartre or Foucault, it has seemed to be in excruciating tension with the basic orientation. Either way, it’s in continuous revival, even as economic, political, and intellectual conditions have been transformed so many times and so profoundly.

Fredric Jameson and Slavoj Žižek are two avatars of this persistence, managing to embody new configurations of Marxist theory, particularly by combining it with Lacan's psychoanalysis. Jameson, in particular, has been central to the intellectual atmosphere of the last few decades, and had a hand in naming our cultural era "postmodernism," and our economy "late capitalism." A famous sentence is often ascribed to Jameson (though he deflects the credit here): "It easier to imagine the end of the world than the end of capitalism." That dilemma drives the renewed utopianism of this volume; it makes the act of imagining a transformed future both seemingly impossible and urgently necessary.

Jameson and Žižek recall a time when people allowed themselves to believe in the possibility of a beautiful future, a time when revolutionary transformation seemed possible or even (as Marx believed) inevitable. Without the exercise of political imagination, Jameson and Žižek argue, we have lost hope for ourselves and our world, or resigned ourselves to a situation of terrible oppression and injustice. This act of imagination is what Žižek, when he first burst on the English-speaking scene around 1990, called "the sublime object of ideology."

In other words, the argument is that though we need a real analysis of our situation, we also need what the 19th century had in abundance: an unrealistic or even strictly fictional vision of where we might end up, or where we might want to. In the long essay that opens this book and gives it a title, Jameson expresses his qualified admiration for such novels as Edward Bellamy's Looking Backward (1888) and Ernest Callenbach's Ecotopia (1975), as well as the wild speculative politics of such figures as Charles Fourier, who inspired many utopian projects all over the world in the mid-1800s. The project, then, might be described as nostalgic futurism.

The result, at its best, is a pretty wild ride, combining high theory in a Marxist and Freudian vein—including a kind of apparently scientific analysis of the structure of history, economy, and psychology—with a set of roughly-sketched speculations about what a post-capitalist future might entail, or how we might reach it. It’s hard to tell exactly what’s being proposed, and how seriously it’s intended. Perhaps Jameson should’ve indeed written a novel, for as theory and analysis, the result here is short on detail, only occasionally inspired or inspiring, and framed in prose that, though it seems occasionally playful, is often laborious and full of tics. A novel would’ve perhaps given a more vivid sense of what life would be like in a much better future: after all, the diagnosis is precisely that we are having difficulty imagining such a thing. After reading Jameson's essay, Žižek's contributions, and the commentaries by Alberto Toscano, Kathi Weeks, and others, I’m still having great difficulty even knowing what it is that they are imagining, much less imagining it myself or wanting it.

Certainly, as presented provocatively in the title, and on and off through the text, the inspiration is difficult to share. Jameson starts with universal conscription, in what he presents as a thoroughly militarized American society, a society that appears to be mobilized for total war. Jameson plays with such a notion, at times almost casually approving its violent implications, and points to the class equality that is often achieved on the battlefield, as well as the relatively egalitarian provision of food, clothing, training, and healthcare that have sometimes been features of military organizations.

At first, Jameson's proposals seem to advocate a kind of quiet revolution, and as an example of Lenin's concept of "dual power" he adduces the Black Panthers' commitment to providing social services as a mode of organization and as the beginning of a new power center. He seems in these sections to envision an organization coming from outside the state which ends up conscripting everyone into a regime in which each person serves the “military” in a variety of social service and productive capacities (with weapons training, however) for about eight hours a week, while having the rest of the time free. As this organization spreads, and though it is itself based on coercion (“conscription”), it renders the government and the capitalist economy redundant, and they begin to “wither away” in the classic Marxist manner.

On the other hand, in a perhaps less utopian mood, the proposal seems to amount merely to universal national service instituted by the government and replacing current forms of employment. That’s how Kim Stanley Robinson interprets it in the piece that immediately follows Jameson's, a dialogue in which two exhausted-seeming interlocutors simply endorse national service in a sort of Israeli style, while diagnosing all the world's problems as due to capitalism. Others of the eight essays included in the volume, by figures such as Frank Ruda, Saroj Giri, and Agon Hamza, praise or supplement Jameson's proposals from a variety of Marxist and psychoanalytic points of view. (A sample from Giri: "[Jameson] cracks open time, temporality, and the subjective figure of the universal army within the 'regime of spatiality' that we famously inhabit today.")  Žižek's piece is easily the best of the lot, though I appreciated Kathi Weeks' feminist intervention.

Insofar as there are concrete proposals, they include "nationalizing the army along the lines of any number of other socialist candidates for nationalization" and "reintroducing the draft to transform the present armed forces back into a popular mass force." Everyone from age 16-60 would serve, and "such an unmanageable body would henceforth be incapable of waging foreign wars, let along carrying out successful coups," presumably owing to its sheer incompetence. "Pacifists and conscientious objectors," continues Jameson, "would be placed in control of arms development."

Such a sketch leaves one wondering about Jameson's seriousness. But if this is a satire or joke, then it’s precisely what it inveighs against: a corrosive expression of cynicism. And if he’s sincere, one might just remark that one person's utopia is another's nightmare.

Like many others in the Marxist tradition, Jameson short-circuits objections by trying to discredit all the terms in which such objections might be couched as amounting to capitalist ideology. So, if one were to call the vision totalitarian, he would reply that the specter of "so-called totalitarianism" is a poltergeist with which capitalists try to short-circuit all forms of collective action. Appeals to “the individual” or “freedom” are precluded by the analysis that these concepts are themselves artifacts of capitalist oppression. Oddly, they keep returning in some sense even in Jameson's own discussion, presumably purged of their alleged origins. But I hope that, whatever terms we may use, we will register that some group of people is actually wielding this universal army, and that it has a hierarchical military structure, now extended to the whole society.

It’s not the impersonal forces of history that will be sending this army here and there to do this and that, but actual people with the usual taint of self-interest, personal or collective. Freedom may be a bourgeois category, but the alternative to it that Jameson is envisioning is universal coercion. And though, as Jameson argues, "the individual" may be an artifact of ideology, collectives may also be, particularly when collective identities are to be simulated under the threat of force. Jameson identifies the allegedly unreasoning fear of state power as "simply terror of the collective as such," which shows what Jameson does mean by “collective.”

"The collective as such": this is an example of a verbal twitch that shows some of the problems of An American Utopia as a piece of writing. Jameson uses the phrase “as such” dozens of times; "the military as such," "utopia as such," "bureaucracy as such," "capitalism as such," "philosophy as such," "warfare as such," "Lacanianism as such," "the species as such," and on and on. Somehow the phrase seems to add theoretical gravitas to abstract concepts, but as the instances piled up it struck me that there’s no definite difference between things as such and mere things. And then it started to occur to me that the theoretical structure that Jameson was working from might be less profound than it has seemed from its jargon. That in turn sent me back to books now regarded as fundamental—his The Political Unconscious and Postmodernism or The Cultural Logic of Late Capitalism—with some suspicion.

Well, Jameson's theoretical interventions were fresher in the 1970s and 1980s. If capitalism was late in 1984, it’s now very late. Jameson is still obsessed with Margaret Thatcher in particular, who comes in for a thrashing yet again in this volume, where it seems merely dated. Perhaps “capitalism,” no matter how late it may be, is as obsolete a concept as “Communism”; state and economy are merged in various configurations all over the world.

Palpably in Jameson's essay, and also in Žižek 's contribution, though it comes there in much fresher and more interesting contemporary terms, there’s an overwhelming atmosphere of “post-ness,” an exhausted recapitulation redeemed only by its moments of almost casual whimsy. Jameson emphasizes that, "the new utopia, indeed, must welcome the most outrageous self-indulgences and personal freedoms of its citizens in all things." Here Jameson envisions wild aesthetic, sexual, and even violent sub-cultures.

In particular, Jameson makes relatively bold and original use of the Marxist accounts of “base and superstructure”: roughly, production is the base and everything else—art, literature, religion: in short, culture—is superstructure. While production, for Jameson, is the arena of necessity (indeed of conscription, in his vision), the superstructure is to be an arena of the wildest freedom.

It’s at this seam that Jameson tries once again to stitch together Marx and Freud/Lacan: in the superstructure, individuals and their libidinous impulses and wild conflicts and complexes reappear. But even this aspect is subject to some chilling, if remarkably unserious, elaborations. He suggests that the populations of whole cities ("New York and Shanghai, for instance") should be made to change places. His proposed Psychoanalytic Placement Bureau "will, in conjunction with unimaginably complex computer systems, handle and organize… all manner of personal and collective therapies." Such ideas might be elements of a good novel (whether utopian or dystopian may be a matter of some dispute), but they make for a puzzling political essay.

As Jameson quotes Lenin and Trotsky, and Žižek speaks for "those who want to remain faithful to Communism," and as they both try yet again to bring these items into some sort of proximity with psychoanalysis and contemporary literature and film, one wonders whether this tradition still has any capacity to inspire, to stir the political imagination which Jameson and Žižek purport to celebrate. If it’s hard to imagine the end of capitalism, it’s also hard to imagine the end of its great opponent Marxism, and yet I think any real act of political imagination had better start by seeing them both as things that might end, or have already ended, along with the interminable theoretical Cold War that Jameson and Žižek are still fighting.

—Crispin Sartwell is the author of How to Escape, a collection of essays.