Voters Burnt by Trump Have Only Themselves to Blame 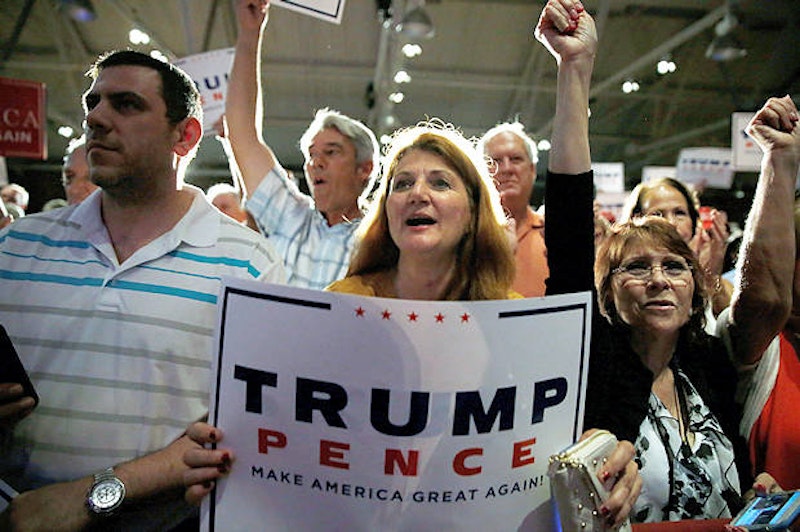 Some background: in January, Donald Trump announced to television viewers that he was giving $1 million to help veterans. Four months later a reporter for The Washington Post spent a day contacting veterans charities by Twitter; the reporter could find no one who had seen that million. That very night Trump called an acquaintance who runs a charity for the children of Marines and law enforcement officers. Trump told the acquaintance his charity was going to get $1 million. The Post reported all this in a story headlined “Four Months After Fundraiser, Trump Says He Gave $1 Million to Veterans Group,” an article that appeared May 24.

This week Greg Sargent, a liberal blogger with the Post, pondered the situation of hard-up citizens who like the help they get from Obamacare but who voted for Trump. The President-elect plans to get rid of the program. Did these voters bring their grief on themselves? “After all,” Sargent asks, “Trump promised countless times throughout the campaign to repeal the Affordable Care Act, didn’t he? If they are complaining about this now, don’t they have only themselves to blame?”

Sargent figures no. “I’m going to argue that, while Trump did repeatedly vow repeal, these voters were absolutely right to conclude that he would not leave them without the sort of federal protections they enjoy under Obamacare,” he says. “That’s because Trump did, in fact, clearly signal to them that this would not happen.” Hold it right there, Sargent. Do you see the flaw in your argument? I do. Here it is: only an idiot would believe Donald Trump. An assurance, a vow, a claim, a “signal”—none of these counts for anything if it comes from the Trump mouth. “Donald Trump gave $1 million,” said the man himself, speaking back in January. His claim spent 16 weeks as a lie before public embarrassment caused Trump to make it true. Trump’s willing to make a flat-out false claim about giving to veterans. But voters are supposed to pore over his remarks on Obamacare. Then they’re supposed to believe what they find there. And if his remarks don’t pan out, the voters aren’t to blame for voting foolishly.

Of course they’re to blame. It takes very little to see that Trump can’t be trusted. Yes, a lot of the Trump-supporting Obamacare recipients don’t have much time for politics. They’re stretched trying to make ends meet. But his best-known remark on Obamacare is literally this: “Repeal and replace with something terrific.” You don’t have to know policy to smell the fraud. You don’t have to get halfway through a big New York Times article and then hope you kind of get risk corridors. If you aren’t a schmuck, you can tell the man’s full of it.

If you voted for Trump, you’re a schmuck. You shouldn’t lose your Obamacare because of that. The program isn’t for non-schmucks, it’s for Americans who need health insurance, and that group includes schmuck and non-schmuck alike. But, looking back, historians will reckon up why America fell and they won’t bother with politeness. After George W. Bush and President Trump and the next disaster wished on us by the heartland numbnuts, the truth will have to be told. About 46 percent of the electorate are too foolish to know they're saps, and that kind of thing can mess up a country.