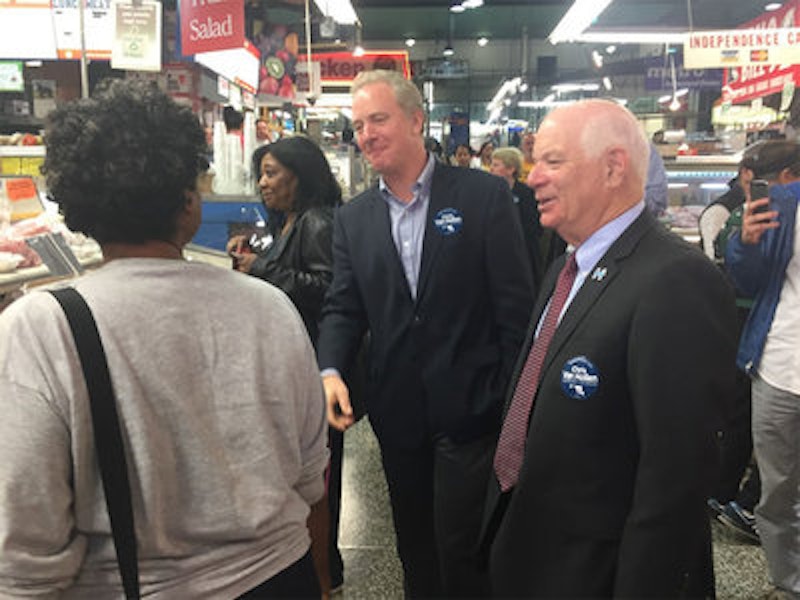 Maryland’s two Democratic senators, Ben Cardin and Chris Van Hollen, have the experience and the brain power to become the gold dust twins of tax policy when the new Congress convenes this week. They’ve done it before individually, and they’ve done it together. And there’s no reason they can’t do it again when Van Hollen joins Cardin in the Senate.

Van Hollen succeeds Sen. Barbara Mikulski, who decided to forego another term in the Senate where she’d served since 1987. Mikulski’s was a slow climb in the Senate, where she introduced pants suits and a women’s privy. She finally won a major committee assignment in her last years, chair of the Senate Appropriations Committee, where her name never appeared on major legislation but she used the position to win, for example, funding for a new firehouse in Dundalk.

Whereas Washington will get a little quieter when Mikulski leaves, Cardin and Van Hollen are a different breed of politician, thoughtful, reserved, almost studious in their approach to issues, just short of wonk. They’re always prepared. Both are experts on tax issues and fiscal policy. Cardin and Van Hollen honed their skills in the State House, in the House of Representatives, and Cardin for nearly two terms in the Senate where Van Hollen will join him in the Maryland delegation as junior senator.

President-elect Donald Trump has stated repeatedly that he wants a massive rewrite of the nation’s tax code, including major tax cuts. To many, this policy dictate merely translates as a reiteration of the Republican primal scream of tax cuts for the rich or, as commonly known, trickle-down or supply-side economics. Trump’s plan, though lacking in sufficient detail, would also add trillions to the national debt, according to fiscal experts, and leave open how he would pay for the trillions more he plans to invest in infrastructure projects. Trump, in his blissfully braggadocios manner, claims his program will boost growth to six percent, up from the current two percent. But even his close economic advisers peg the more realistic number at three percent, with a stretch.

To implement his policy and reinforce that notion, Trump has chosen as his key fiscal advisers two investment bankers from Goldman Sachs, Steven Mnuchin, as treasury secretary, and Gary Cohn as head of the National Economic Council. They will be joined at the table by a list of other billionaires, as well as Steve Bannon, keeper of the alt-right torch and a former Goldman Sachs executive, who will serve as Trump’s senior adviser. Recall that during the campaign, Goldman Sachs served Trump well as a symbol of Hillary Clinton’s greed and sinister ties to Wall Street. And now Mnuchin joins Trump, bringing with him the heavy baggage of having headed a bank that foreclosed on 36,000 mortgage holders during the financial meltdown at the same time the bank accepted $900 million in federal bailout money, according to reports. As an additional gift to Wall Street, Trump has promised to repeal the Dodd-Frank reforms, which were intended to rein in banks following the 2008 financial disaster.

At the other extreme of the Republican Party is the Capital Hill agenda of House Speaker Paul Ryan (R-WI), whose intent is to revolutionize the nation’s social policy, in effect, by privatizing many of the services government provides, i.e., Social Security, Medicare and Medicaid. Ryan would turn over responsibility for funding those programs to Wall Street and leave them to the whim of the marketplace. Imagine, if you will, what might have happened if this were the case during the ‘08 financial collapse.

It’s at this intersection where Cardin and Van Hollen can enter the chaos as point men for Senate Democrats, who are slightly outnumbered 52-48, in the battle against the coming Republican onslaught.

Cardin, a tax lawyer by training, began his political career succeeding his uncle, Maurice, in the Maryland House of Delegates, where he became chairman of the Ways and Means Committee, the House’s key fiscal and budget committee. He eventually became House speaker. He later ran for Congress and was reelected nine times. He served on the House Ways and Means Committee, where he specialized in fiscal issues such as pension reform and health care. He won expanded Medicare coverage for many forms of cancer screening. In the Senate, Cardin continued his work on fiscal policy on the Finance Committee and its subcommittees on Health Care and Taxation and IRS Oversight. But Cardin has staked his claim as ranking Democrat on the Senate Foreign Relations Committee.

Van Hollen, over the past several years, has been cable television’s Democratic face in the budget battles with Ryan, who was chairman of the House Budget Committee before assuming the speakership upon Rep. John Boehner’s resignation. Van Hollen rose rapidly within the House pecking order. He was ranking member of the Budget Committee and a member of the Joint Select Committee on Deficit Reduction. As such, Van Hollen was designated Democratic Leader Nancy Pelosi’s point person on budget negotiations and was a frequent House negotiator at the White House.

In the Senate, Van Hollen will serve on the Budget and Taxation Committee, giving Maryland a seat on each of the two key Senate fiscal committees. With two seasoned tax experts thus situated, Maryland has an unusual role and opportunity to help shape the nation’s fiscal policy as well as to protect programs that are beneficial to the state. Trump, for example, has vowed to trim the federal bureaucracy. As if to underline the point, he’s named Rep. Nick Mulvaney (R-SC), a leading deficit hawk and a founder of the House’s Freedom Caucus, as his budget director. There are 145,000 federal employees in Maryland, or 5.5 percent of the state’s workforce, as well as nearly two dozen federal installations. And there are about 725,000 Social Security recipients, in one category or another.

Trump is surrounding himself with captains of industry, those who think, as he does, in terms of deals and not of programs and people. Only recently it was learned that Trump and his secretary of state-designate, Rex Tillerson, chairman of Exxon Mobil, share a favorite author, Ayn Rand, the author of clunky books such as Fountainhead and Atlas Shrugged, and advocate of unfettered free market enterprise and selfish individualism, called in her patois, objectivism. Those two tomes are also Ryan’s favorite. Who even knew Trump reads books?