I Love The Nation’s Pleas for Donations 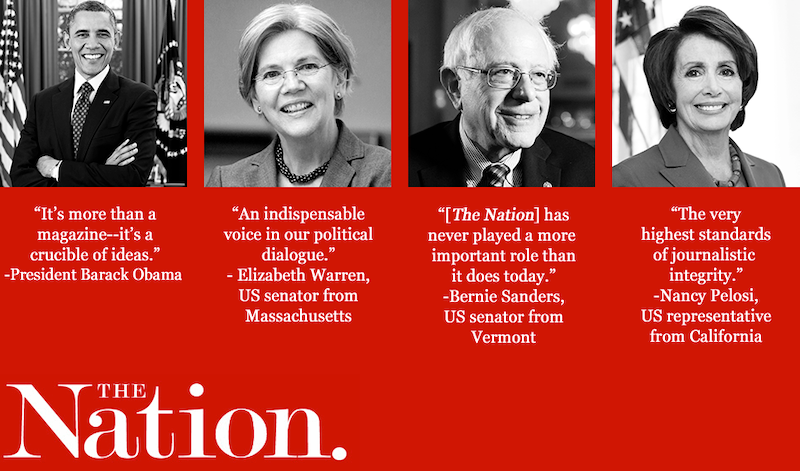 There’s not much of interest that occurs during the dead week between Christmas and New Year’s Day—in truth, a “week” is an underestimation, since the year doesn’t really rev up until around Jan. 10. However, I do enjoy the annual fundraising scam from The Nation that ticks off in the waning days of the year, and this December was no different. In the past, there were ludicrous claims that the weekly would cease operation if financial goals weren’t met, yet on Jan. 1 it was magically still in business. I don’t think use of the word “scam” is uncharitable or misleading: after all, The Nation’s budget isn’t huge by magazine standards, and, based in New York, it has access, and sympathy from some of the wealthiest liberals in the country. Not that The Nation, unlike Hillary Clinton, would stoop to accepting dirty Wall Street money, but its rolodex (dating myself, but you get the gist) certainly contains the names of “clean” philanthropists who’d toss $500,00 here and there and spare readers the request of $37 to keep the publication afloat.

I don’t subscribe to The Nation any longer, although I did for at least two decades, back when the late Christopher Hitchens and Alexander Cockburn were columnists, and Katha Pollitt, who remains, always provided a chuckle. But I am on the email list. Managing editor Kai Wright makes this appeal: “To resist the Trump era, we must first remember what preceded it. At the start of the election, urgent, insistent, progressive movements were defining forces in American politics. From university campuses to fast-food chains to Hollywood studios, people of conscience everywhere were demanding better police accountability and action on climate justice, economic inequity, and sexual violence. We have been building a more just world. One stolen election cannot douse that fire.”

Two observations: “At the start of election,” in fact, Donald Trump was the defining force in American politics, mostly because the majority of the media didn’t take him seriously and he played reporters for suckers. Second, is Wright really claiming that those who voted for Trump lacked a “conscience”? Isn’t that the sort of “coastal elitism” that got Democrats into their current pickle?

An example of a blinkered Nation article, this from John Nichols, a longtime correspondent for the weekly, plays up the common theme that Trump has no “mandate.” He writes: “Claiming a mandate when no mandate exists is the real attempt to delegitimize the election—by denying the reality that most Americans did not vote for Trump or for the Republican Senate that will soon attempt to rubber-stamp his nominees for Cabinet posts and the extreme agenda advanced by [House Speaker Paul] Ryan in the House.”

What exactly is a “mandate”? We know that Clinton won the popular vote by two percentage points, yet as both candidates have acknowledged, if the Electoral College wasn’t in place, they’d have campaigned in a different way. After George Bush lost the popular vote to Al Gore in 2000, one would’ve thought exasperated Democrats would’ve set about ditching the EC. But it didn’t happen. It doesn’t really matter if Trump has a “mandate” or not; he’ll be the new president and the GOP will control both chambers of Congress. Mandates are meaningless, as Bush proved early in his first term when he won Congressional approval for his ill-fated invasion of Iraq. If Trump is unpopular—a distinct possibility—it’s likely the Democrats will re-take the House in 2018 and, despite defending far more Senate seats than the Republicans, a “wave” election might result in Democratic control there as well. So maybe instead of endless harping about the “stolen” elections, it seems to me that “progressives” ought to go about recruiting candidates for the midterm elections, which are already underway (sort of) below the radar.

Oh, and then there’s the email sent by New Republic publisher Hamilton Fish, also digging for dollars, which says, “We won’t prevail if we depend on just the support we receive from subscriptions and our modest advertising revenues.” This is particularly offensive, given that TNR’s owner, Win McCormack, is quite wealthy and has donated over $1 million to Democratic causes over the years. McCormack was named the 19th wealthiest and influential person in Portland in an 2015 survey. Which, at least to me, makes Fish’s cry of poverty sleazy at best and dishonest at worst.