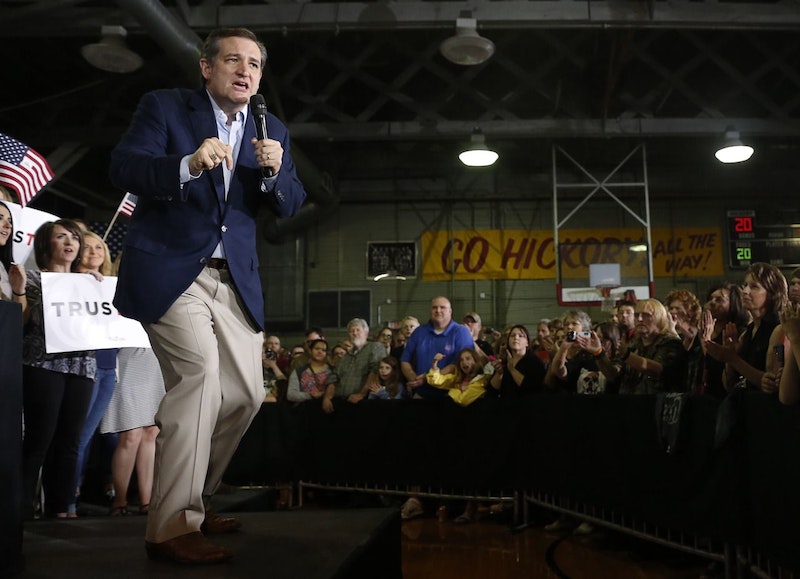 Ted Cruz wants Republicans to care. Care about something, damn it. “Donald Trump and Hillary Clinton both agree that grown men should be allowed to use the little girls’ restroom,” he tells them in Indiana. He’s on about the bathrooms all the time. Surely, Indiana cares about keeping big penises away from little girls. Cruz sets out his blonde daughters so the crowd gets the idea. The girls are five and seven and wear “matching pink dresses,” to quote The New York Times.

In theory Cruz’s shot at Indiana was the educated voters around Indianapolis. Voters with college degrees, jobs and marriages don’t go for Trump. Cruz won Wisconsin by winning stable, educated conservative voters near Milwaukee. The stable, educated voters around Indianapolis awaited their anti-Trump. Instead area voters had better care about bathrooms. When Cruz said what he did about Trump and Hillary agreeing, he said it in Knightstown, 38 miles from Indianapolis. Up in South Bend, where degrees are scarce and pay has fallen, Cruz announced, “If Donald Trump dresses as Hillary Clinton, he still can’t use the little girls’ restroom.” That was about the difference.

Cruz is hot on bathrooms because Trump has stopped being an issue. The debate over Trump’s worthiness has ended, and Trump didn’t win it, but that doesn’t matter. He may not be accepted by all, but everyone figures he’s inescapable. The general public says he won the most votes and ought to be the nominee. The party establishment sits limp and considers its toes. And the anti-Trump voters stay home. April was the month of the fade. After getting socked in Wisconsin, Trump walked through outsize victories in the Northeast, and the reason appears to be that people didn’t turn out.

Time after time Trump’s Northeast vote totals outran his polling. In New York, he polled at 53 percent (the Real Clear Politics average) and finished with 60 percent. But Cruz won more votes in Wisconsin than Trump did in New York. Nate Silver tells us that turnout in Wisconsin was 25.6 percent, and that across the Northeast it averaged just 9.9 percent. Apparently a section of the electorate faded away, and that section was anti-Trump.

The timing is mysterious. In March Trump publicly shat on Mrs. Cruz’s appearance with a retweet. Then he talked about abortion and established that he had no idea what he or anybody thought about the issue. Then he lost a big primary. Then anti-Trump voters sat on their hands instead of voting. Trump had proven himself to be a social freak and a conniving ignoramus. He’d proven this before, but now he did it with his biggest audience yet, with a nation sizing him up as he marched the final yards toward the nomination. Trump blew his cover and people took notice. Then the people said what the hell.

I think we’re dealing with a section of the public that’s fainty and neurotic. Principled conservative voters are so distraught they don’t want to land a punch. If they did, Trump might go down. Then who’d be in charge? These thinking conservatives, these people who believed they had beliefs, have lived a lie and are watching the truth crack through. Our Principles PAC says it’s spending $1 million on ads against Trump in Indiana. The Club for Growth says it’s already laid out $1.7 million. But Our Principles has already spent $16 million this cycle, and the Club has spent almost $10 million. And anti-Trump Republicans aren’t voting. The will to believe has gone.

From National Review two weeks ago: “There is preliminary talk of Cruz assembling a high-profile team of GOP surrogates and bringing them to Indiana… The goal would be to project unprecedented party unity against Trump with a roster of supporters that, in addition to familiar faces such as Walker and Carly Fiorina, could include Jeb Bush or even Mitt Romney.” The Walker is Scott Walker, governor of Wisconsin. Apparently the Cruz campaign never sent an invitation, so he hasn’t shown. Neither has Bush or Romney. The unprecedented unity of the Republican Party took the form of Carly Fiorina. Nobody minded. They wondered why she was there, but they didn’t miss the old heroes. Because Republicans are discovering week by week that various old heroes actually aren’t heroes, that nobody cares about them after all. Jeb and Walker and “even” Mitt Romney are just on hand with everybody else. Everybody's waiting for the end.