Stop Worrying About People Who Are Offended

Without the freedom to offend there’s no real free speech. 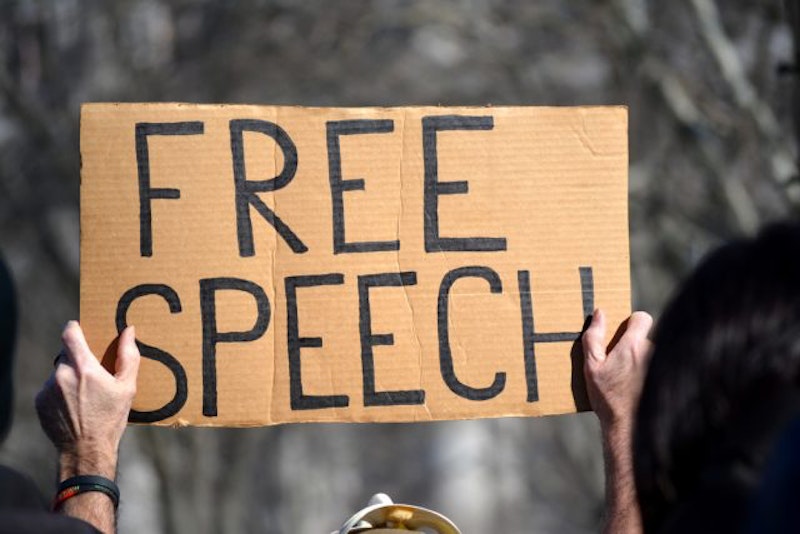 Markus Meechan taught his girlfriend's dog to give what looks like a Nazi salute when he heard “Sieg Heil” and other offensive Nazi-related phrases. The video he made, which included a clip of the pug raptly watching Adolf Hitler's speech at the 1936 Berlin Olympics, went viral, people got offended, and the 28-year-old Scotsman got arrested and put on trial for a hate crime. Such is life in the Orwellian U.K. these days, where police inform citizens that they may visit their homes over the weekend if they're unkind on social media.

According to the resident of Coatbridge, Lanarkshire, he’d just had enough of his girlfriend going on about how cute the chubby little “Buddha” was, so he decided to film the pug doing the least endearing things he could think of to wind her up. His girlfriend has corroborated this, stating that he meant no offense to Jews. Perhaps he should’ve shared it only with his girlfriend and close friends, given the subject matter and the Internet’s weakness at conveying nuance.

The freedom to offend is a fundamental element of free speech, which in turn is the sine qua non of Western liberal democracy. Pope Francis was dead wrong when he said, imperiously, “You cannot make fun of the faith of others.” He sounded like a monarch defending lèse-majesté. There's nothing you shouldn't legally be able to make fun of. This holds especially true of organized religions like his own, which hold themselves in high regard, arrogantly claiming to have life all figured out. The more powerful an institution, the more it must be made fun of.

Traditionally, religions are founts of falsehoods. As recognition of this reality grew over time in the West, their centrality to public life has diminished, much to society’s benefit. Religions in the West are no longer taken seriously on matters of science because they’ve been subjected to what the great 20th-century science philosopher Karl Popper called “conjecture and refutations.” Over the fierce objections of the frightened clergy, sacred religious dogmas, such as the notion that the sun revolves around the earth, were put to the test by the conjecture of “offensive” alternative theories that led to their refutation. Take away that power to offend, and we're right back to believing what the pre-enlightenment priests told us.

Ephraim Borowski, a Jewish leader in Scotland whose family died in the Holocaust, spoke to the court of his disgust at Meechan’s behavior, which included him repeatedly saying, "gas the Jews" to the dog. Bizarrely, he also said he felt sorry for Buddha, as if a dog could actually be trained to be an anti-Semite. While Borowski would naturally take offense at such language, especially if he didn't understand its context, he has no right to expect the criminal justice system to redress his personal grievance for him. Detective Inspector David Cockburn, pretending to know what all fair and sensible people think, said, “The clip is deeply offensive and no reasonable person can possibly find the content acceptable in today’s society.” Nobody who was reasonable could possibly believe that someone who wasn't anti-Semitic might try to get a rise out of his girlfriend like that?

Regardless of whether or not someone intends to offend, there are ample reasons not to wish that the legal standard for free speech stops the moment someone gets offended. Essentially, this gives the minority who are most sensitive and prone to taking offense, often religious or political extremists, power over the majority that wishes to express itself freely without obsessing about hurt feelings. Claiming offense becomes a tactic for shutting down opposing views, as those who call every single criticism of Islam “Islamophobes” well know.

The late Christopher Hitchens once said, “I’m very depressed how in this country you can be told that's offensive, as though those two words constitute an argument.” He sarcastically said he was offended that a cartoonist in Denmark couldn't do his job without getting a death threat and that the Pope thinks birth control is worse than AIDS. Hitchens knew that without license to offend, free speech is little more than an empty vessel.

Who’s going to decide what's offensive? Will it be Inspector Cockburn, with his infinite insight into the human psyche, or Ephraim Borowski, with his ability to read Markus Meechan’s mind? Maybe it’ll be some interfaith council that seeks peace and harmony, and just wants people to behave “civilly” towards each other, according to its own definition of civility. Perhaps the Council on American–Islamic Relations, which many befuddled people think is the Muslim equivalent of the NAACP, should be the arbiter. Then it could be codified into law that anyone who draws a picture of Muhammad, which is automatically “offensive,” could be put on trial. That’s the dictatorship of the indignant.