The government isn't required to intervene in your relationship with your mom. 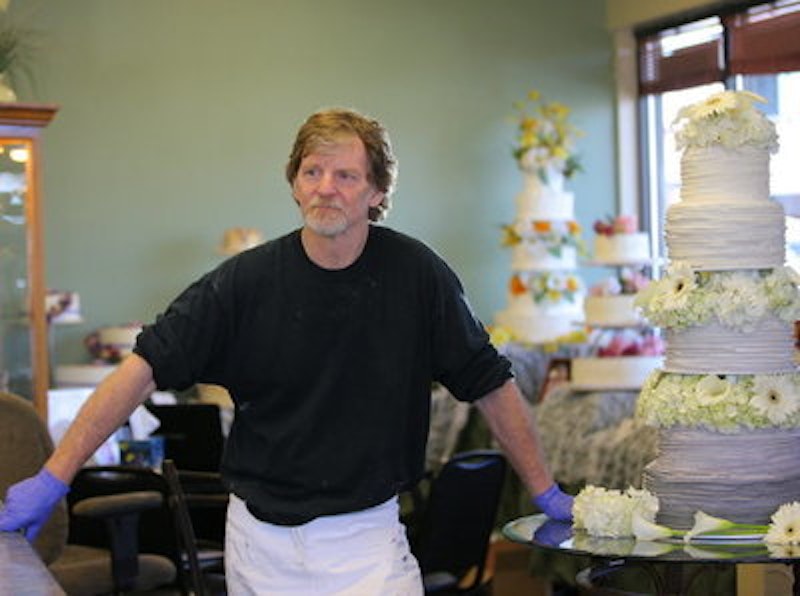 I’m entirely supportive of gay marriage. I’m also entirely supportive of people's right not to be forced to bake cakes, or for that matter forced not to. In this session, the Supreme Court will hear arguments in the case of Jack Phillips, a baker in Lakewood Colorado who, in 2012, refused on religious grounds to make a cake celebrating David Mullins and Charlie Craig's union. Phillips has been in a legal nightmare ever since. A Colorado judge ruled that Phillips was legally required to bake cakes for same-sex weddings if he baked them for opposite-sex weddings. So he stopped baking wedding cakes.

It seems that his lawyers' arguments will not, as you might expect, turn on Phillips's right to practice his religion, or right not to be forced to violate his religion, but on his right to free expression. The man is a serious baker: his operation is the "Masterpiece Cakeshop," and he considers cakes his art. The argument, according to The New York Times, is likely to turn on whether, in the practice his art, he can be forced to express a message he repudiates.

But whatever the defense strategy, I take it as a general principle that there should be very broad protections for conscientious objection on religious or moral grounds. I think, for example, that pacifists shouldn't be forced to drop Agent Orange on peasant villages. I think doctors whose religion or moral beliefs prohibit abortion should under no circumstances be forced to perform one. I don't think you should be forced, say, to Tweet views you disagree with. I don't think you should be forced to vote for a particular candidate. These last two strike me as obvious. The principle is the same.

Ask yourself this question: In human history, which has created worse problems, refusal of the demands of the state, or capitulation to it in the face of one's own moral or religious misgivings? The latter has been the cause of death of hundreds of millions of people. The former hasn’t. You may have to overcome your little scruples in order to shoot people in an unjust war or participate in genocide. Avoiding such insane moral disasters requires a principle respecting the individual conscience, specifically on matters that most people or the government regard as obvious and settled.

Gay marriage isn't genocide, and I don’t have any moral misgivings about it. But I think it brutalizes someone to force them to violate their own conscience; it’s a form of assault, a moral assault, an assault on the mind and on the spirit. At a minimum, I think you'd need to show that disastrous social effects would result from permitting people not to participate in order to justify something like that.

This sort of case is sometimes compared to Jim Crow segregation, and it’s against the law to refuse to serve someone in your private business on the grounds of race. And there is no denying that, as with race, there has been systematic and terrible discrimination against gay people, some of it enshrined into law, as in the Defense of Marriage Act.

However, the situations are also extremely different. Jim Crow segregation limited the actions of African-Americans, hedged them about with restrictions, made simple needs difficult or impossible to fill, expressed a society-wide devaluation and degradation of black people. Mullins and Craig are just not in that situation at all. All they have to do is go to another bakery. Almost every other baker in Colorado would bake them a wedding cake. And of course, racial segregation was itself legally enforced, though individual business owners also did object to ending it at their own lunch counters. There are no remaining legal restrictions on gay marriage.

What if Phillips was claiming that he objected to making cakes for black people on religious grounds? Well, interesting problem, but no one I know of is currently making claims like that. It’s not an actual issue. If it were, we'd have to judge it in the context of how serious and widescale the limitations on people's actual lives actually were. You'd have to identify a state interest in ameliorating systemic discrimination. I don’t believe that this case raises those issues in the same way.

Mullins admitted the triviality of the practical problem to the Times: “Of course we could get a cake somewhere else," he said, and I assume that they did. "This was about us being turned away from and denied service at a business because of who we are and who we love.” Really, what the couple say is driving them is the alleged trauma, carried out in front of the mother of one of the grooms. Phillips recalls telling them, “I’ll make you birthday cakes, shower cakes, cookies, brownies. I just can’t make a cake for a same-sex wedding.” Mullins described the experience: “We were mortified and just felt degraded, and it was all the worse to have Charlie’s mom sitting there with us. You don’t want your mom to see something like that happen to you.”

This gives one baker way too much emotional power over the lives of his almost-customers. I believe my response in their situation would’ve been to roll my eyes, think that Phillips was a wrong-headed religious fanatic, and buy my cake somewhere else. Surely Craig and Mullins are aware that such prejudices or religious objections exist. In this case, it presented them with a very slight inconvenience and something that could be interpreted as an insult. Insult Phillips back, or tell him that Jesus is love or whatever, and stomp out, okay?

And the government isn't required to intervene in your relationship with your mom.

I am, in other words, unimpressed by their alleged trauma, and think that, in the whole ordeal, Phillips has had worse practical consequences. Meanwhile, the Times reporter found Phillips in his shop, decorating a cake with the likeness of Martin Luther King (which admittedly is intended to be devoured). He says he'll happily serve gay people, just not for a wedding, which he considers a religious ceremony that, when performed between two men, is incompatible with his own belief.

Let's say the Supreme Court rules in Phillips' favor. Would you seriously expect gay people to have a problem getting wedding cakes or hiring a deejay? It's not an actual problem. But creating cakes through state-mandated forced labor really would be.