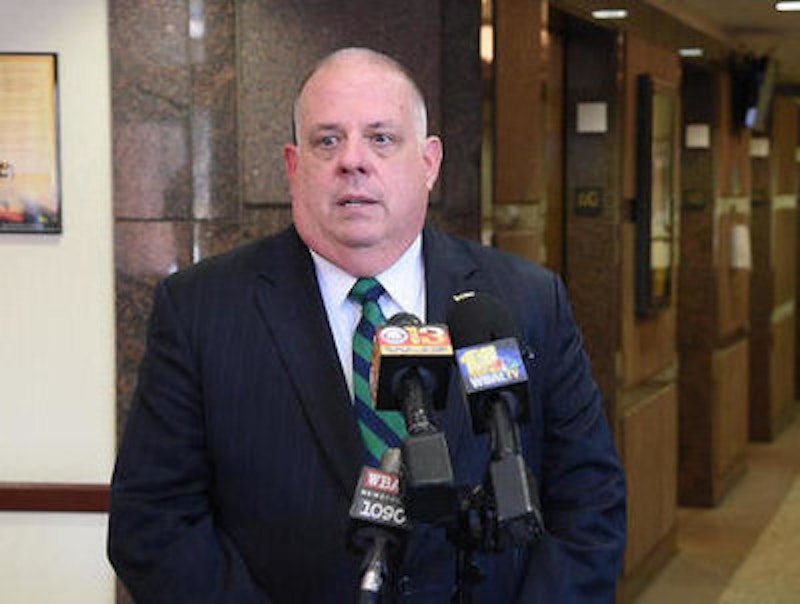 Maryland Gov. Larry Hogan (R) knows that a major advantage of incumbency is easy access to the media, and he also understands that underexposure is often preferable to overexposure. He’s not an indiscriminate daily headline grabber like President Trump, but instead shows a facile skill for making the right news at the appropriate time.

So, twice in a week, Hogan offered gesture stories, those that may accomplish nothing but soften the blow, to two vital constituencies for next year’s election—a conditional pot of gold for the Washington region’s beleaguered Metro system, and an order to muffle the annoying screams of jet engines at two busy airports, Maryland’s BWI-Marshall and Washington’s Reagan National. And along the way, he rejected a report on low-performing schools and promised to use the muscle of his office to lure Amazon’s new adjunct headquarters to Baltimore’s Port Covington—all bold-type displays of incumbency.

The first was an offer of an additional $500 million over four years—if Virginia, the District of Columbia and the federal government match Maryland’s offer—to prop up the financial needs of Metro after Hogan helped to scuttle the idea of a dedicated fund, i.e., tax, to support the rail system now and in the future. On the loop through the three jurisdictions are huge daily riderships from Maryland’s two most populous counties, Montgomery and Prince George’s, that deliver about half the state’s votes, mostly Democratic.

Hogan earlier rejected any additional contributions, including new taxes, to support the impecunious Metro agency. His stubborn objection provoked criticism in the other capitals as well as a nasty editorial in The Washington Post headlined, “Larry Hogan to Metro: Drop Dead.” But Hogan’s abrupt reversal drew cynical-to-cautious reactions, including a suspicious new Post editorial, captioned, “Metro gets a sudden lifeline.” (Many Post editors and staffers no doubt ride Metro to work and assignments.) There are reported doubts about the sincerity of Hogan’s offer, including a public dressing-down by Virginia’s outspoken Democratic governor, Terry McAuliffe.

The second and notably empathetic story had a coy and comic tweak underlying the serious issue of ear-numbing environmental noise. Hogan, by letter, ordered Maryland Attorney General Brian Frosh (D) to sue the Federal Aviation Administration over the thunderclap noise created by new flight patterns at the two major airports though upgrades to accommodate congested air traffic. BWI-Marshall, one of the nation’s fastest growing airports, sits in the middle of a densely populated area in a southerly direction almost midway between Baltimore and Annapolis. It’s an area that was once host to many bygone Democratic clubs but is now conservative and often votes Republican.

The roars and piercing screams of modern jet engines have made “many Maryland families miserable in their own homes with louder and more frequent flights which now rattle windows and doors,“ Hogan said in his letter. “As elected leaders of this state, we cannot allow this situation to stand.”

The noise disturbances result from new air routes. The FAA’s $29 billion upgrade at selected airports across the country allows planes to navigate by satellite instead of radar. In this way, planes fly more direct and compact routes, including landings and take-offs, saving time and fuel but also creating more noise.

But entwined with Maryland’s (and other regional jurisdictions) feud with the FAA modernization program is another dispute that’s a hangover from the recent contentious General Assembly session. The legislature decreed that the attorney general, always a Democrat, should be independent of the governor (Republican only three times in 50 years.) The Assembly overrode Hogan’s veto. Before that, the attorney general had to petition the governor for permission to take legal action on behalf of the state.

But since he was unleashed from the Governor, Frosh, a former state senator, has taken a number of independent actions against the Trump Administration as well as the federal government as a separate entity, several involving environmental issues. Frosh’s sensibilities are very much in line with the agenda of the Maryland Democratic party to link Hogan to Trump in their effort to reclaim the governorship next year.

Most recently, Frosh joined three other states—California, Maine and Minnesota—in a lawsuit to block President Trump from cancelling the Obama Administration’s DACA program that protects undocumented young people from deportation. Fifteen other states have filed a similar suit.

In directing Frosh to sue the FAA, Hogan seemed to be exercising the prerogatives of his office as the state’s top elected official as well as poking a finger in Frosh’s eye—you wanted the power of independence, now use it. Or was Hogan simply getting the issue off of his desk and onto Frosh’s?

Whether Frosh will follow through on Hogan’s demand is unsettled. Frosh’s office says only that the attorney general is considering the issue. But a sure bet is that, 2018 being an election year, Frosh will caucus with the General Assembly’s leaders for a sense of direction as well as to check his charge to determine whether he must follow the Governor’s dictate. The noise continues.

BWI-Marshall, originally known as Friendship Airport, was a sleepy little airdrome that was owned and built in the 1950s by Baltimore City. It was bought by the state in the early 1970s when Baltimore was in desperate need of cash and began divesting several of its assets to the state (including City Hospitals and its bus system.) The state greatly expanded, modernized and re-christened Friendship as Baltimore-Washington International Airport. Recently, Thurgood Marshall’s named was appended to honor the nation’s first black Supreme Court justice. BWI-Marshall is one of the nation’s busiest airports.

Hogan is no fan of mass transit. He’d rather lay down great swaths of asphalt in rural areas. But transportation is not about moving cars. it’s about getting people from here to there. And the $500 million Hogan’s offering the Washington area Metro is about half the money the state was obliged to pony up for the proposed Red Line in Baltimore, which Hogan inherited and killed. The Red Line was a matter of poor design and routing and not a case of finance. The issue was, why build a tunnel next to a tunnel? The Red Line money, as noted, was diverted to rural highways while the funding for the Purple Line linking voter-rich Montgomery and Prince George’s Counties remained intact and the line is proceeding after a series of legal challenges and delays.

Linking MoCo and PeeGee with the Purple Line is a nasty regional dispute. PeeGee favors it for access to MoCo’s upscale shopping and restaurants. Parts of MoCo are resistant, fighting it ostensibly over environmental concerns, but the line is advancing while some issues still linger in court. The Inter-County Connecter, recently dedicated (not named for) by Hogan to former Republican Gov. Robert L. Ehrlich Jr., is an under-used disaster and a drain on the state’s transportation fund. A toll road, its daily car count is far below original projections and fails to produce enough revenue to justify the GARVEE bonds that Ehrlich, as governor, used to borrow construction money by pledging future transportation funds.

Since the 1970s, additional funding, or subsidies, for the Washington Metro—beyond the legally required contributions—has been a tense regional dispute. Early in its years, there was talk of dedicated funds originating from regional sales taxes, commuter taxes and other levies to prop up finances of the rail system through one of the most populous and heavily traveled regions in the nation. Then, as now, Maryland led the charge against any additional taxes to support the Metro. But transportation bonds are paid for by gasoline taxes, tolls and fees, so no matter how it’s parsed a tax is still a tax. It just sounds different.