A trust has been broken. 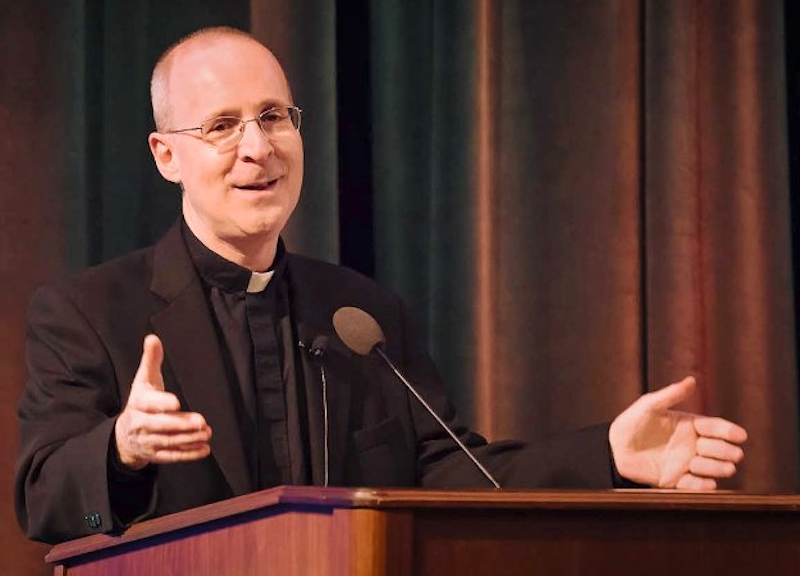 When it comes to the controversy surrounding Jesuit priest Father Jim Martin, there are two truths that should be considered. The first is that the recent rescinding of an invitation to Fr. Martin to speak at Theological College, a seminary affiliated with the Catholic University of America, is a disgrace. Fr. Martin is a bestselling author and a good priest, and should be allowed to speak anywhere he wants. The focal point of the controversy is Martin’s advocacy of LGBT people in his new book, Building a Bridge: How the Catholic Church and the LGBT Community Can Enter Into a Relationship of Respect, Compassion and Sensitivity.

The second truth is that the criticism conservative Catholics have of Fr. Martin is valid. For years there’s been a problem with liberal and homosexual priests in the Catholic Church trying to change doctrine. Their personal behavior has often put young male students at risk for sexual abuse. To claim otherwise is to surrender truth to political correctness. The criticism that’s come from the conservative right and resulted in Fr. Martin getting disinvited to speak is hyperbolic. That doesn’t mean it’s not true.

As I observed in my book God and Man at Georgetown Prep, in the 1960s, '70s, and '80s, the Catholic Church, and primarily the Jesuits, experienced a major influx of homosexuals. This wasn’t necessarily a bad thing. Gay priests ran the theater and arts programs, taught us compassion and mercy, and understood rock ‘n’ roll. The lavender clerical mafia was a counterbalance to the old-school Greatest Generation Jesuits: men who were boxers, reliable if one of us knocked a girl up, and would administer a headlock—or worse—if we farted during mass. The old-school Jesuits were beer and football—“the Pope’s marines.” The modern ones were Liza Minnelli, rock, and other types of enhancers.

Both types of Jesuits contributed to a mostly healthy atmosphere. In Jungian terms, the gay priests provided anima, female energy, and the old-timer animus, male energy. Integrating the mix was good for us. We had football players who did school plays (in minor roles) and rock ‘n’ rollers (me) who played sports.

And yet. There were a lot of gay priests around in the 1980s, indeed a majority of brothers and administrators when I was a student at Georgetown Prep. When young men at the peak of their physical attractiveness and power are surrounded by that many gay men, it can be a charged atmosphere. For some priests, it’s just too much to resist. To use the converse as an example, imagine a group of young, strong, healthy, and celibate males in their 20s and 30s dispatched to run an all-girls high school. Would anyone be surprised if a sex scandal or two erupted?

There are also, from a Catholic perspective, a lot of troubling things about Fr. Martin’s opinions. He wants a relaxation of the Church’s teaching that sodomy is immoral and any attraction to commit acts of sodomy is an objective disorder. He writes that the phrase “objectively disordered… relates to the orientation, not the person, but it is still needlessly hurtful. Saying that one of the deepest parts of a person—the part that gives and receives love—is ‘disordered’ in itself is needlessly cruel.” Martin wants to use the replacement phrase “differently ordered.” As Fr. Gerald Murphy observed, “This would be a change in the Church’s teaching. It would mean that God created two different orders of sexual behavior that are both good and right according to his will: Some people are homosexual by God’s express design and some are heterosexual by God’s express design. If that were the case, then homosexual acts themselves could no longer be described, as they are in the Catechism in Paragraph 2357, as ‘intrinsically disordered.’ If the inclination is simply different, and not disordered, then acting upon that inclination is simply different, and not disordered. Homosexual activity would simply be natural behavior for ‘differently ordered’ people.” This is no small thing for a 2,000 year-old Church.

A way through the current controversy is to simply fall back to the position that most people at Georgetown Prep had when I was there. We knew there were gay priests—a lot—but didn’t think they, or homosexuals in general, were going to hell. It was an unstated agreement. After all, most of us were horny young guys and when the girls at Stone Ridge, Holy Child, and Georgetown Visitation gave the thumbs down, we sometimes found that release by going it alone. This is something considered a mortal sin. Everyone at Prep knew who the gay priests were. In return, the gay priests never preached heresy, preferring the tacit understanding, shared by all, that buggers have always been part of the human species. Father Martin’s swatting the nest of orthodoxy ruptured that agreement, as has the Catholic right’s obsessive focus on homosexuality.