Tip Your Uber Driver or Lose Your Five Stars

In the sharing economy, the person you pay must like you. 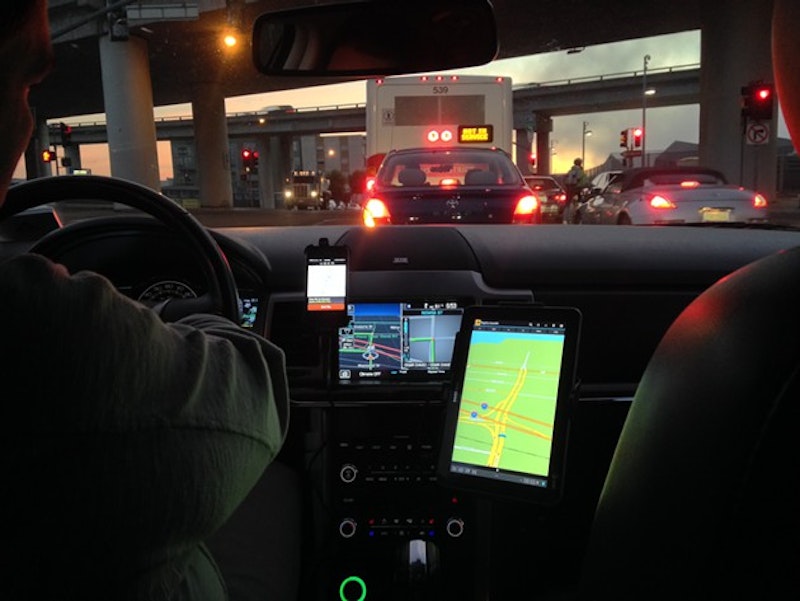 Uber drivers will be able to post a sign in their vehicle stating that they accept tips if a San Francisco judge approves the terms of a recently announced legal agreement of a class-action suit against the ride-sharing service. Uber customers might want to start tipping their drivers to maintain their precious 5-star Uber rating that helps them get their rides faster, and factors into their self-esteem. This will require carrying cash, as Uber has no payment system in place for tips, and would push the service away from its original conception as an alternative option to taxis.

Tipping’s traditional in American culture, and we do so for a number reasons. It's a way of greasing the wheels, like its more pernicious cousin, bribery. And while both practices are widely disparaged, many people actually like them. Diners realize the expectation of a good tip motivates servers to make their experience smooth. In the business world, those unfettered by the concept of ethics in commerce like being able to secure a contract with a bribe.

In the Middle East and South Asia, the line between a bribe and a tip gets blurred with the practice known as "baksheesh." Baksheesh often operates like a straight tip, even though it may be for a service you don't value, such as someone opening a door or handing you a towel in a bathroom, but it also extends into the territory of receiving something that's not available to the general public. In Egypt, the right baksheesh might buy you the opportunity to view that forbidden mummy, essentially making it a mini-bribe.

In places like Japan, where I once lived, you don't tip anyone, and the service is top-notch. This simplifies things. There's no need to know what the proper tip is for a service, and never any hard feelings. Overall, I find this to be a superior system to ours. I'm conflicted on the topic, however, having substantially benefited from this confusing practice in the past while working as a bartender. Bartending as a college student regularly put 70 bucks cash in my pocket after a Friday night shift. In those days, I'd walk into any restaurant I felt like and have a meal, which was a good feeling. After graduation, at a place where stars like Yoko Ono regularly came in, it was often $150 for a night's work. I can’t make a case that I "deserved" such remuneration, but that's the system. I still tip bartenders generous, even though many here in Richmond do little more than open a beer for me.

Tipping has recently fallen out of favor in influential corners of the restaurant industry, which some have interpreted as a portent of the future. Restaurateur Danny Meyer is eliminating tipping at 14 of his restaurants by the end of this year, and other restaurants are following suit. The practice is ingrained in the culture, though, and isn’t going away any time soon. Many Americans, especially older ones (who tend to have more money) aren’t ready to give up the sense of control tipping gives them.

I tip restaurant workers and the person who cuts my hair, and sometimes see tangible results as a repeat customer. Tipping drivers, on the other hand, is a different matter. A ride is generally just a ride, and I'll never see the driver again, so I've never understood why I should tip a cab driver. Like most people, I just want to avoid getting a dirty look from the cabbie. It looks like now the motivation to tip an Uber driver is a negative one too—fear of retribution.

I'd have an easier time justifying a tip for a cab driver than an Uber driver. At least you won't wake up on New Year's Day and realize a cabbie has charged you $200 for a 15-minute ride. Uber drivers want to charge rationally (based on supply and demand) so they should accept rational payment. Tipping them will seem like more of a bribe than a tip—so they give you those five stars. Welcome to the sharing economy, where the customer needs to be liked.