It’s time to declare preferences to the oddball entertainer. 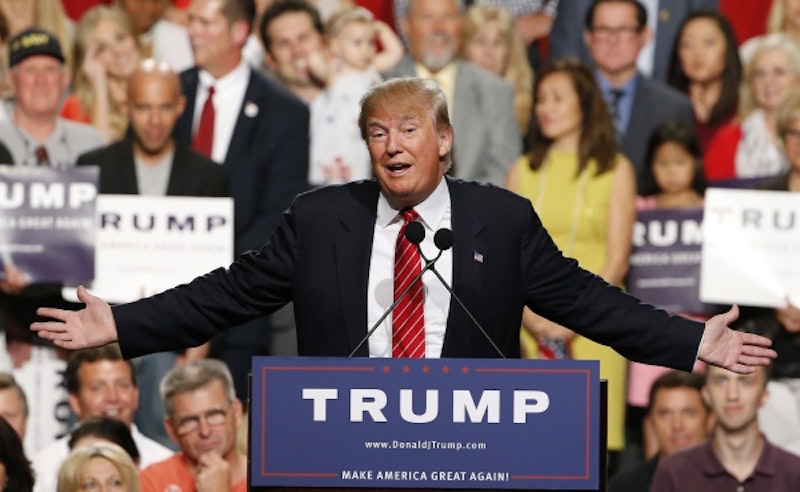 It’s not hard to imagine how loud the Trump Harrumph from the self-satisfied “elite” commentariat, both liberal and conservative, will be tonight during and after the GOP’s last debate of 2015. Barring an assassination attempt of the Republican front-runner—those who scoff at that possibility aren’t paying attention—which would exponentially ratchet up the noise, I’m guessing most pundits and politicians will focus on the skirmishes between Trump and Ted Cruz, Trump and Marco Rubio, Trump and the Springsteen fan from New Jersey, and not a word about the forgotten Bush.

William McGurn, an op-ed columnist at The Wall Street Journal—who’s usually pretty good—typifies the conservative befuddlement in his piece today, the sub-hed of which reads, “Whining about Donald Trump’s support instead of trying to grab it.” McGurn correctly identifies Barack Obama as “our most politically correct president, with nothing real to say on the threats we face.” Check. And another polished apple for succinctly describing Trump: “[T]he main weakness of Trump foreign policy is not that it’s ‘fascist,’ ‘unhinged’ or ‘outrageous.’ It’s that it’s almost all seat-of-the-pants.” And then McGurn goes all mushy.

He writes: “In Las Vegas, Mr. Trump’s rivals have an excellent opportunity to move us past chest thumping. He (or she) might start by distinguishing his approach from the lead-from-behind ethos of the Obama years, which has left the world with a highly destabilized Middle East and an Islamic State fast rewriting established borders. He might further outline what a GOP alternative would look like…” And so on.

Yet McGurn doesn’t even mention a single one of Trump’s competitors, an act of omission that can fairly be ascribed to the writer’s own confusion. Bear in mind that McGurn is not writing a WSJ editorial, in which overt preferences at this stage of the presidential cycle aren’t considered kosher, but rather an opinion piece. So with all of McGurn’s fulminating about Obama’s passivity and Trump’s off-the-cuff threats/promises, the reader doesn’t have a clue—and maybe McGurn doesn’t either—about who the author might prefer at this point. Right now, Cruz and Rubio are seen as Trump’s main rivals, and both have, for better or worse, been vocal about their platforms, foreign and domestic. Is it too much to ask an op-ed writer to be more forthcoming?

He concludes: “Instead of whining about Mr. Trump’s support and the stupidity of his followers [in reality, that’s the media dumping on Trump supporters, not the candidates], here’s to the Republican contender with the wit to try to take that support away from Mr. Trump by offering Mr. Trump’s voters a clear, strong and superior alternative.”

Translated: McGurn, like the majority of his colleagues—again, from both sides of the political spectrum—can’t fathom Trump’s popularity, as if the celebrity’s resilience is such a deviation from every past election, that he doesn’t want to jeopardize his credibility any further by venturing an educated guess on who exactly will derail Trump.

I give the Democratic reporters and pundits more latitude: at least the honest ones openly cheer for a Trump nomination because it’s widely perceived that Hillary Clinton will defeat him in a landslide. (There are, of course, the fake worrywarts, who furrow their brows at the danger of a presidential oddity like Trump, but that’s just for show.) Like McGurn, I also hope Trump’s knocked out (but won’t bet on it). Unlike the WSJ worthy, I’ll admit my preference for Rubio, since he has a better chance of defeating Clinton, and Cruz’s positions—which make Pat Buchanan look like Bernie Sanders—are ugly, xenophobic and downright mean.