Spartans! Trump is Leonidas from 300 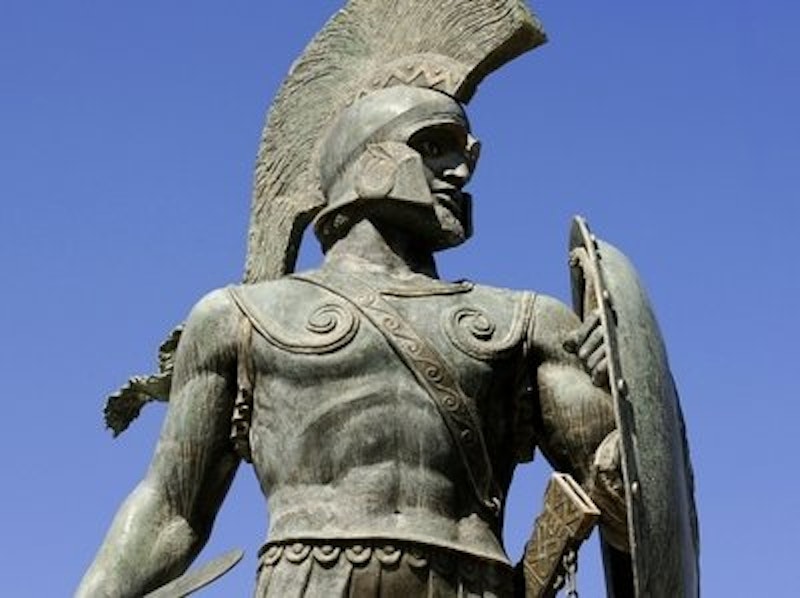 He’s vastly outnumbered, both by the enemy that wants to invade his country and by the elites back home who recoil from his crude aggression. He loves women, as long as they’re beautiful and stick to their God-given roles. He speaks plainly and relishes a good fight. His antagonist is a tall skinny black man who thinks he’s a god.

This description applies to two men—Leonidas, the Spartan king in the great film 300, and Donald Trump, 2016 presumptive Republican nominee for President. The parallels are obvious and many. In 300—based on real events—the Persian “god king” Xerxes seeks to invade Athens and Sparta and avenge his father’s death. All that Xerxes requires from Leonidas, the king of Sparta, is an offering of air and water—gifts that are a simple “token of Sparta’s submission” to Xerxes. Leonidas refuses, instead calling for Sparta’s leaders to mount a force to resists Xerxes’ army. When Sparta’s elite, guided by the vision of beautiful female oracles, vote to avoid battle, Leonidas defiantly takes 300 soldiers to meet Xerxes at a geographical bottleneck, the Hot Gates.

In 2016, America is run, if not dominated, by an elite that insists the populace give simple tribute to political correctness. It shouldn’t be a big deal for us to allow men into women’s bathrooms in the name of transgenderism. These crazy Christians won’t bake a gay wedding cake, when it’s a simple “token of submission” to the will of liberalism. Doubt climate change? Reeducation—or jail—isn’t really that bad. And if you’re a conservative think twice before starting a non-profit—really, it’s no big deal to just do something else, and you don’t want a visit from the IRS. These are things that all right-thinking people believe. Believe them as well and your life will be easy.

Obama is the modern Xerxes. Arrogant, condescending, effete and smug, Xerxes believes the hype of the thousands who have declared him a god. Years before acquiring his supposed godhood, he watched his father Darius, the King of Persia, die in battle at the hand of General Themistocles of Athens. Darius’ last words to Xerxes were orders to abandon the war, since only "the gods can defeat the Greeks.” But Darius' naval commander, a power hungry woman named Artemisia, claims that Darius' last words were a challenge for Xerxes to attain godlike powers. After wandering in the desert Xerxes reaches a cave, where he sees a hermit. Xerxes then bathes in a golden liquid, emerging as the eight-feet tall “god-king.”

Obama took a similar path. Growing up in Hawaii, Obama would’ve been a normal, well-adjusted kid were it not for his father, a socialist. In his autobiography Dreams From My Father, Obama writes, "It was into my father's image, the black man, son of Africa, that I'd packed all the attributes I sought in myself." His grandmother Sarah Obama told Newsweek, "I look at him and I see all the same things—he has taken everything from his father… this son is realizing everything the father wanted."

Searching for an identity and validation, like Xerxes hungry to legitimize his father’s erroneous vision, Obama left the paradise of Hawaii for the desert of Chicago. There he met his own craggy hermit, Bill Ayers. Obama also come under the spell of Michelle Robinson, a resentful, plotting African-American Artemisia. Rising quickly in politics, heeding the militant advice of an angry woman, Obama submerges himself into the gold liquid of media adoration. He’s depicted as a god.

The rest should’ve been easy. Obama would transform America the way Xerxes (and his massive army) would transform the world. Taxes would be raised. Religious freedom would be quashed. The rise of the oceans would be halted.

And then, Trump appears. Like Leonidas, Trump’s an earthy man of sound common sense, a bit crude, and fond of brute force and speaking plainly. It’s easy to imagine Trump calling Greeks exactly what Leonidas sarcastically does in 300—“philosophers and boy lovers.” The elites—even in their own countries—are scandalized by Trump and Leonidas. The enemies of these men think they’re insane and belong in some other era. With a similar kind of superciliousness and sarcasm, Xerxes and Obama ponder the small fighters who would defy them. A gift of air and water, revoking religious freedom and abandoning our the Constitution for European judges and the UN, forcing climate change skeptics into reeducation camps—what kind of madman would stand athwart such common sense? Who are these silly men to stand in the way of the right side of history—and of a god himself?

Ultimately, history proves Leonidas is on the right side of history, even if he and the 300 lost their battle. History is not just liberalism steamrolling dissent. It’s lasting honor for men who fight for freedom, natural law and common sense, even if they’re far ahead of their time.

Like the 300, Trump’s going to lose. But afterwards, as more and more freedom slips away under Clinton, remember him.