Trump Runs as an Anti-Republican

The Chamber of Commerce is having conniptions. 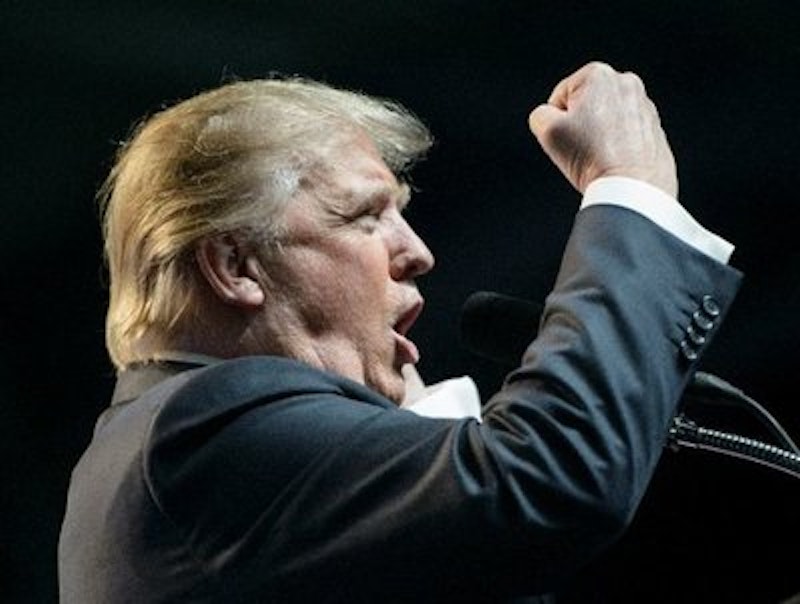 The Republican Party, then and now, has always hitched its fortunes to free-market capitalism. And now we’re watching the GOP’s entire party structure come tumbling down piece by piece, and along with it the nation’s social order challenged by a new generation of voters while older people struggle to cling to the traditional ways. Screwing each other to improve the breed is the Republican way of life.

Demographics are destiny. Brexit was partly about generational change and social anger with a bit, one might suspect, of residual British resentment over World War II against Germany which makes the rules for the European Union. The older generation of Brits that remembers the war and the buzz bombs voted to exit the EU while the young hipsters in London chose to stay. (The BBC reported that 82 percent of the voter turnout was over age 55 while 47 percent was under 34.)

Credit Sen. Bernie Sanders, and to a lesser extent, Donald Trump, for advancing the discussion of dramatic social turmoil at one extreme or the other. Sanders appealed to morality and Trump unleashed the dark side of democracy. But it was Sanders’ claim of a “rigged” society that caught the interest and enthusiasm of yet another new generation of voters. And they are demanding change.

The Democratic Party is not exempt from the crumbling of capitalism’s model and the warp-speed social changes driven by sub-groups within society—LGBT, blacks, Hispanics—although it is much more a willing partner in accommodating, often initiating, the upheaval of recent years. The aggrieved in society often bond with Democrats to achieve social goals because they know Democrats will bend; few, if any, agents of change align with Republicans because the party is rigid and unyielding to dramatic turns, stuck with political extremists and the rules of the marketplace.

Within the past few weeks, for example, the Supreme Court—shy one tie-breaking member since the death of Justice Antonin Scalia and the Senate’s refusal vote on Judge Merrick B. Garland’s nomination to the high court—ruled in favor of liberal positions on abortion, contraception, union fees and affirmative action though it rebuked President Barack Obama’s executive action on immigration (but no one expects deportations.) And add to the list of social upheaval the continuing dispute over transgender bathrooms and the Pentagon’s decision to lift the ban on transgender service in the military. The evangelical flank of the GOP and the screaming banshees on talk radio are having conniptions.

And so the two major political parties will assemble in convention in a couple of weeks, with boldly contrasting directional signals for the nation. The Democrats have drafted a platform that is a deft compromise but far more to the liberal left than Hillary Clinton would’ve leaned if she hadn’t been shoved by Sanders into the reluctant embrace of the theoretical Democratic-socialist state. Clinton’s even advocating the strengthening of labor unions, a welcome idea through probably alien to beliefs. Here again, age displays its waning influence. Surveys show that the elderly are suspicious of the word socialist; young people not only accept it, but they welcome its promise of a huge discount on the cost of living in the promised land.

Republicans have been too busy heading off an insurrection against their nominee to present a platform for public review. But riffle through a copy of the 2012 document, or the one before that, or go back as far as you wish, and it’ll be the same regurgitated screed—anti-abortion, God-country-family, pro-gun, anti-minimum wage, Founding Fathers, the rules of politics are the rules of the marketplace. Its appeal is to a narrow and vanishing slice of the Norman Rockwell segment of the American electorate. And for a political party that fashions its beliefs on the Darwinian theory of the fittest, it displays little of its ability to adapt as the primal condition for survival.

But here’s what a Trump platform might look like: Trump is out of sync with the Republican Party on trade. The GOP is historically the party of free-traders and money in motion. Trump is a protectionist who wants to renegotiate treaties and block the Trans Pacific Partnership (which is not yet approved.) Even the starched pin-stripers at the Chamber of Commerce are fuming over Trump’s departure from the party line.

Trump is a strong defender of the NRA’s position on the Second Amendment, but he would undo the First Amendment by proposing changes in libel laws and granting political privileges to churches, joining together that which the First Amendment separates. (Even Jesus favored separation of church and state when he declaimed, “Render to Caesar the things that are Caesar’s, and to God the things that are God’s.) Trump favors waterboarding and torturing (both are prohibited by the Geneva Convention.) Trump would “renegotiate” or “eliminate” NATO—he has straddled both positions. And his most celebrated declarations are his xenophobic positions—partitioning off Mexico and banning Muslims from entering the country.

As much as separates the two parties, they have a singular concern in common. They have, presumably, of course, put forth two of the most unpopular, unlikeable candidates—ever?—each with unfavorable ratings high enough to poke a hole in the Ozone layer. Clinton, in full pander, is willing to be overshadowed on the same stage with the real deal, Sen. Elizabeth Warren, acting as those warm-up acts did before Sinatra. Trump will be outdone, if that is possible, only by his own ego. A growing majority of GOP leaders now say they would prefer a nominee other than Trump, sensing omens of apocalypse in November.

Assuming that the party decides to simply suck it up and Trump survives an attempted convention revolt, the potential body count is inestimable. With Trump’s drag on the down-ballot, GOP control of the U.S. Senate is imperiled. A turnover of only five seats is needed for Democrats to regain control. So endangered is the GOP majority in the Senate that the leadership conscripted Sen. Marco Rubio to change his mind and run for re-election in a difficult Florida race. And an unknown right-wing Tea Party Trump supporter, David Glenn, emerged as the unexpected winner in a five-way Colorado primary and is almost certain to lose the general election. In all, seven Republican senators are considered endangered.

Trump the candidate, scripted or unscripted, is pugnacious and unpredictable. His campaign is an organizational mess even though some repairs have been made at the top. Lately it has more arrivals and departures than Reagan National Airport. But essentially it’s a family affair. And the Republican convention in Cleveland is an uncertain celebrity production as well as a magnet for disruption. For there are really two conventions that take place—the convention in the hall and the sideshow on the streets. And it’s usually the convention on the streets that attracts the most TV attention as those will affirm who remember Chicago in 1968 and Miami in 1972.

Even worse, big names and big money are boycotting and abandoning the Cleveland Republican convention. Party leaders such as former President George W. Bush and his brother, Jeb, as well as Sen. John McCain, are passing on the convention (as is Maryland Gov. Larry Hogan). And many traditional sponsors, i.e., corporations that contribute thousands of dollars, such as General Electric and Ford, are withholding their financial support for the Cleveland spectacle. By contrast, the Democratic convention in Philadelphia the next week will be all brotherly (and sisterly) love, if, by then, Sanders declares himself all in.

The Republican Party is the Tories’ last stand in America. Paradoxically, Trump seems to be running as the anti-Republican, against his own fading party and much of what it represents. And running against the Chamber of Commerce is about as un-Republican as a Republican can get.