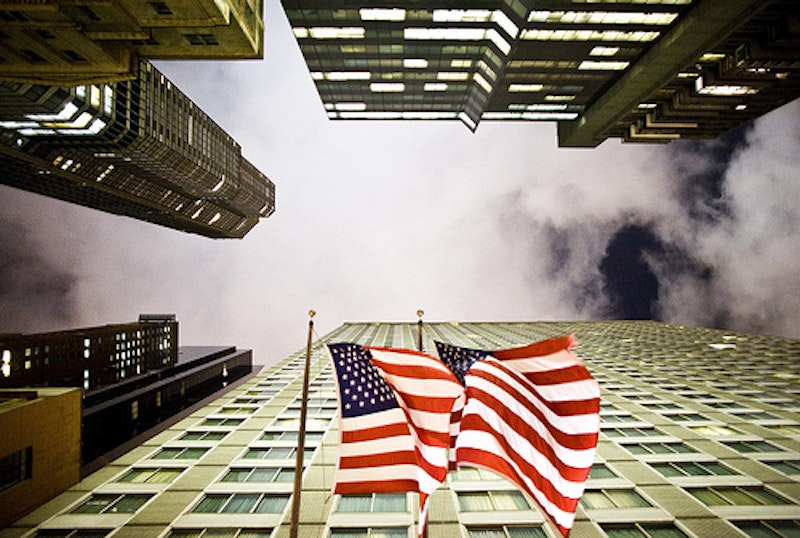 Are libertarians stupid? All humans are stupid, so yes. In this, my final Splice Today column (for now, at least), I should confess some of the things that most worry me about the movement. I also allude to them in an online radio interview tonight to which I’ll provide link info below.

For perspective, I recently saw the dumbest thing I’ve ever seen on the Internet. I can’t in good conscience link to that and waste even more of your time, but it was a drunk-sounding, hick-sounding couple spending 15 minutes doing battle with a dancing and singing plastic skeleton toy they had concluded was possessed by a demon—since it was malfunctioning and no longer singing “Super Freak” as it was supposed to, merely occasionally asking “What do you want?” They scream at it to leave the house, in the name of Jesus Christ. At the end of the YouTube clip, the toy malfunctions further, dancing rapidly and loudly like a jackhammer, until the terrified hicks pull the plug on it. I assume these people are typical voters, something worth keeping in mind at all times.

So, maybe I shouldn’t be too hard on my fellow libertarians as they grapple to come up with the best way to persuade the public to ditch government and embrace free markets—because it’s probably all futile in the end anyway. But I can’t help being bothered that my fellow travelers keep falling into two major errors (apologies for the oversimplification) that I think might be impairing the movement’s effectiveness. Either they decide (1) they should water down libertarian principles a bit to become more popular—they stop being sticklers for strict property rights adherence and, aw, heck, maybe let just a little dash of government exist here or there or maybe over here—or else (2) they stick to principle, which is good, but simply cease to care whether they sound like callous jerks.

There has to be a way to avoid both the mushiness and the jerkiness, but observation suggests that’s a tough tightrope for most libertarians to walk for some reason.

This is a microcosm of a problem the broader political culture has of assuming there’s a tradeoff between being nice and being a stickler for property rights. Given what a hardass Ayn Rand was, how often so-called “liberal-tarians” by contrast offer to soften property rights to prove their compassion, how much leftists hate property rights, and how much conservatives like to emphasize their love of “higher” and less materialistic things like God and charity, you could argue that virtually everyone across the political spectrum (except me) thinks property rights adherence is at least a little bit cold and mean. You’re all wrong. Nice people do not violate property rights, and you don’t need to be callous to recognize that.

Without getting too technical, this year’s Libertarian Party presidential and vice presidential candidates, Gary Johnson and William Weld, hit a nice tonal balance in their new campaign video, which counts for something, so I’ll just have to hope it resonates with people across the spectrum. We’ll fix the philosophical details later.

I know there are libertarians out there—usually on the callous side of that mushy/callous spectrum—who cannot abide the vagueness and moderation of the LP ticket’s tone, but I’ll take that slight vagueness, especially with its firm “pox on both your houses” approach to the Democrats and Republicans, over the tendency for more ideological libertarians to prove their philosophical creativity by picking far weirder, far less libertarian political candidates to defend, including overt anti-capitalists Bernie Sanders and Donald Trump, the latter of whom is now on a crusade to convince swing states like Pennsylvania to hate global trade and NAFTA, the stupid useless thug (as noted in an article pointed out by Reason Foundation’s Adrian Moore).

Libertarians, of all people, should be able to resist being lured into the divide-and-conquer battle between different mainstream factions of our would-be rulers. And there are plenty of things government is doing so appalling that most decent people would object without having to pause and ask themselves whether it’s right-wing or left-wing to complain. Talk about those things more and about candidates less, I’d suggest.

Take the mounting willingness of U.S. schools to call in the cops on elementary school children merely for saying things that others might mistakenly find offensive—and the willingness of those cops and schools to imply they can send the un-P.C. kid away to Child Protective Services, as was hinted in the case of the kid who offended someone by using the word “brownies” to refer to food (reading between the lines there, note the creepy collaboration between multiple elements of government to produce a threatening, controlling environment without any specific authoritarian law being written).

Or consider the new willingness over in the doomed EU to mount only token resistance [http://www.breitbart.com/london/2016/06/30/wristbands-stop-sex-attacks/] to attacks by migrants, lest the victims and the state that purports to protect those victims seem culturally insensitive. In the UK, no true bastion of liberty with or without the EU, you can be punished as racist for anti-ISIS speech but will likely not be punished for pro-ISIS speech. That doesn’t seem like a long-term formula for survival.

If libertarians need reminding that they should focus on fighting the real enemy—government agents and other violent actors—instead of each other or just the disfavored candidate of the day, they should stop asking questions like “Trump or Clinton?” and practice constantly asking themselves deeper, less partisan, more unsettling questions, such as “Might governments actually be consciously working against their own populations rather than just being inept?”

You’d like to think that even when government consorts with criminals and terrorists, in places like Benghazi or Riyadh, it’s got some sort of benevolent master plan, like something out of James Bond. Why assume that, though? No, really—why? It’d make a cool story, sort of like bureaucrats forging supervillains into the Suicide Squad in next month’s big DC Comics movie. But what if government is just doin’ crimes all day, like any other gun-toting organization that routinely takes innocent people’s money away and does mysterious, unhelpful things with it? Who do you imagine is monitoring government and keeping it honest on a day-to-day basis—that couple with the dancing skeleton problem I mentioned earlier? You need to accept the fact that we’re in very deep trouble.

Well, I won’t give up the fight, but after exactly one year of writing daily columns for the wonderful Splice Today, I will exit this venue, at least for now, and urge you to start checking the (soon to be more hopping) Libertarianism for Beginners Facebook page, my eponymous personal blog, and your e-mail in-box if you send me a non-spammy-sounding request for info about forthcoming events I’m likely to do in New York City (you’ll find a contact page on my blog).

But regardless of your geographic location, tonight at 8:00 Eastern, you can hear the next big Seavey thing on NWCZ Radio as I’m interviewed by rockabilly libertarian DJ Johnny Rocket and his pals, on a show that will also be archived from tomorrow on in a file with my name on it in the episodes list on the Johnny Rocket website. I suspect right at the top of that episode you’ll hear my karaoke rendition of Kermit doing “Rainbow Connection,” if you haven’t already (but also the somewhat more polished Cab Calloway doing “Minnie the Moocher”).

After that, there’s frank talk about libertarianism—and even an alarming lightning round of Rocket’s rapid-fire questions for yours truly. If it all seems too disjointed to make sense, by all means read my book for more details, and thanks for listening, in all media.