Bernie Up to Bat 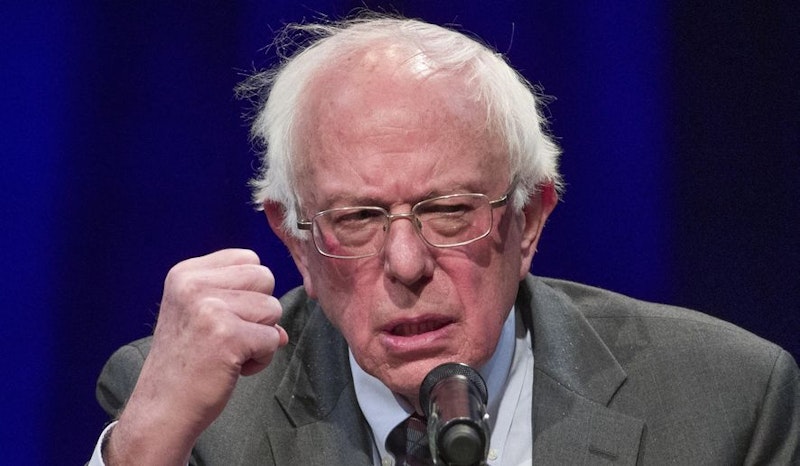 I didn't vote for Bernie Sanders in 2016, and don't expect to in 2020. There are things I find admirable about the man, starting with the way he brought new ideas into politics that have remained, in a way that doesn't typically happen for candidates who lose primaries. I also have a soft spot for a presidential candidate who's an elderly Jewish guy with a thick Brooklyn accent, who gets played by Larry David on SNL.

However, I'm skeptical Sanders can deliver on many of his promises, and I'm applying what I call the "Older Richer Test" to 2020 candidates: In the Democratic primaries, I won't consider any candidate who's older, or richer, than Donald Trump.

What’s most salient about Sanders is that invoking his name makes people say and believe stupid, untrue things about him. And this applies to people across the political spectrum, whether they support Sanders or oppose him.

I've heard the following allegations, by multiple people, about Sanders just in the last few months: That he would have defeated Donald Trump. That the DNC rigged the 2016 primaries to keep him from winning. That he's personally responsible for the defeat of Hillary Clinton. That his campaign against Clinton was one of the most vicious and nasty in history. That he's uncommonly racist and/or sexist. That he's a self-loathing Jew or even an anti-Semite. And finally, that he's either an active agent of Russia, or that his candidacy was driven by a Russian bot conspiracy.

Let's take these one by one.

"Bernie would’ve won," in a general election against Donald Trump? I guess we'll never know, but it's clear Trump would’ve thrown the same kitchen sink at Bernie than he did at Hillary, even more tinged with anti-Semitism and red-baiting. But the fact was… he didn't win.

The DNC didn't rig the 2016 primaries. The committee was filled with Hillary loyalists, common knowledge at the time. But the DNC doesn't have the power to move votes (nor does the RNC, which didn't back Trump in 2016 until the very end.) The 2016-era DNC was weak, ineffectual, deep in debt, and also incompetent. Clinton still defeated Sanders by millions of votes.

While throngs of Hillary fans believe that the battering from Bernie in the primaries caused her to lose to Trump, there's no indication that happened. Nor was their primary battle especially personal or nasty. It was much less contentious than Clinton's primary contest against Barack Obama eight years earlier, one that failed to prevent Obama's election. Bernie also openly and enthusiastically endorsed Clinton at the Democratic convention, even as thousands of his supporters came to Philadelphia urged him not to do so.

While the sexual harassment accusations against Sanders' campaign are a black eye, one for which the candidate has apologized, Sanders was never accused of such behavior himself. Nor is it evidence of misogyny that Sanders ran against a female candidate for president. And while nobody likes the “Bernie Bros,” they don’t hold a candle to Trump fans when it comes to either misogyny or online obnoxiousness. The idea that Sanders was the candidate of white people in 2016 has been severely overblown, too.

If Sanders has ever tried to hide or minimize the fact that he's Jewish, he's done a poor job of it, which should be obvious to anyone who has heard him speak for more than 10 seconds. Sanders, who once lived on a kibbutz, is also much less anti-Zionist than just about any other socialist; I remember a lot of grumbling from leftists in 2016 that Sanders wasn't anti-Israel enough.

Claiming that Sanders is an agent or tool of Russia is red-baiting, and the kind of argument made by people who see "Russian subversion" as the hidden force behind virtually every development in U.S. politics. And the Sanders-centric Russian bot story, like just about all Russian bot stories, is nonsense.

Democrats, perhaps, are doomed to re-litigate the 2016 primary battle forever. And many of them, the moment they hear the name "Bernie," will instantly think of 2016 and at least one of the commonly held myths shared above. There are plenty of reasons not to vote for Bernie Sanders, but none of the above are good ones.