Plus an explanation of his rise. 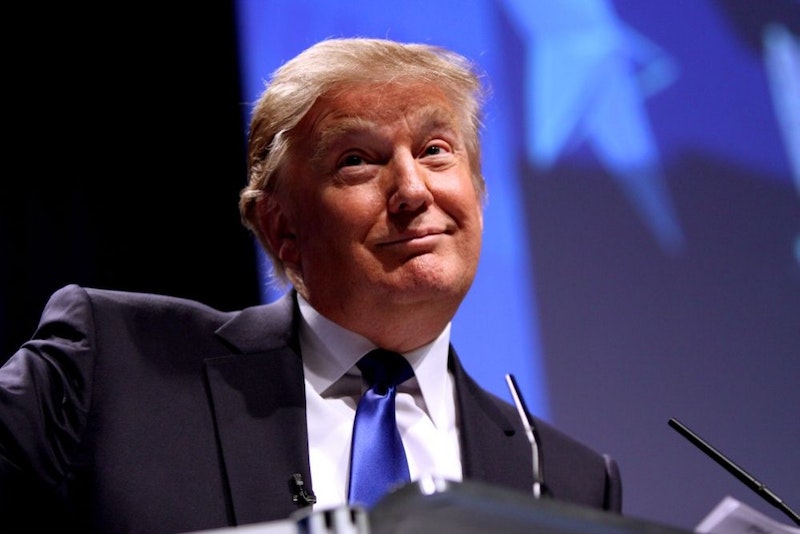 Dumb people like big TV screens, and there are more and more big TV screens around. So now Donald Trump is running for president. Here's what else you need to know about the Trump phenomenon.

1.  What does Donald Trump look like? He looks like a pair of refrigerators stationed under a haystack. Bill O'Reilly, sitting across a table from Trump, seems compact, a neatly turned-out head waiter, a Gene Hackman role. When Trump sits in the Fox studios with Bret Baier, he looks like he was doing a squat thrust and a chair got stuck between the floor and the backs of his thighs. The chair is made of toothpicks, and a strong breeze carried it there. Trump might shift weight and release the chair. Or he might... oh no.

2.  What if Donald Trump farted? He could laugh it off. Joe Biden, on farting and guffawing, would think he’d laughed it off, but people would keep making fun of him. Trump might really pat the incident on the head and send it along to harmlessness. “A little delayed commentary,” he would say right after the blast. “The, uh, yeah, the Iran deal, what I was saying. This whole thing, it's just—” And then he lifts his arms, and his tongue rattles through a good splattt. “So I'm saying that twice, okay?” Pause. “It doesn't smell bad. I think my diet must be okay. I'm doing all right with my intake because, I tell you, this smells healthy.”

3. Is Donald Trump a “monstre sacré”? He's an asshole, but an indulgent, bemused asshole. (“I love the Mexican people. I love their spirit. But let me just tell you.”) You may feel that he's fatuous and vain about being in charge, but it's not like he imagines being in charge—he bounces those interviewers around. He's in charge to a lavish degree, and that's comforting to watch: at last, somebody who can relax. Some star performers have that knack. They know we'll keep looking at them, so they get loose and sport about, luxuriate in their whim chasing. The rest of us get to see life as it should be lived. “And I found the card!” Trump says happily, about to read off Lindsey Graham's private number. He's so casual about it.  “I don't know if it's the right number,” he says. “Let's try it.”

4. What about Donald Trump and universal health care? Not long ago, a can-do businessman could get centrist voters interested in him. I think that ended with '08, when a lot of Middle America got burnt by the financial interests. Consequently, Trump has spent the Obama years traveling toward the right and the grasslands occupied by the Republican herd. Now he's squeezing in, and the other grazers want to know what he meant by praising Obama and saying we need universal health care. His answer (I bet) to his fellow candidates: I said this, I said that. But I am what you're supposed to be—I'm a man. I made a ton of money for myself, and I buy people like you. Who should everyone vote for?

5. What is Donald Trump's secret weakness? He gets mad when you make fun of him. Remember the simmering heap who sat through the White House Correspondents Dinner while President Obama made jokes about The Apprentice. Of course, Trump's weakness counts as a secret only because he doesn't know about it. He showed up for Comedy Central's roast, and then spent a solid hour with a bent little smile tacked to his face. The smile didn't look human. It looked like Babylonian cuneiform: a petite slash and another petite slash, the two of them joined at an acute angle. Jeff Ross told him to let his face know he was having a good time.

6. Why does Donald Trump make people sad? He’s what Sarah Palin wanted to be. Trump and Palin both try the same thing when handling the press: they want their answers to provide so much spectacle that nobody cares what the reporter asked. Palin can't pull it off. Back when people had her on shows, she’d try to burble past a question and get frazzled. Trump breezes past. Of course, Trump understands what the questions are about. Palin didn't. Just having them asked made her nervous; that's why she hid from everyone but Sean Hannity and others inclined to cut her slack. She couldn't hack it on O'Reilly's show, not even as a correspondent, but Trump can let O'Reilly fire questions at him. (O'Reilly: “Are you telling me you are going to send American ground troops into Syria?” Trump: “I'm not telling you anything.”) Trump decides which objections measure up. Watching him underlines the sadness of Palin's career.