Seavey: If only all candidates looked as bad as Trump. 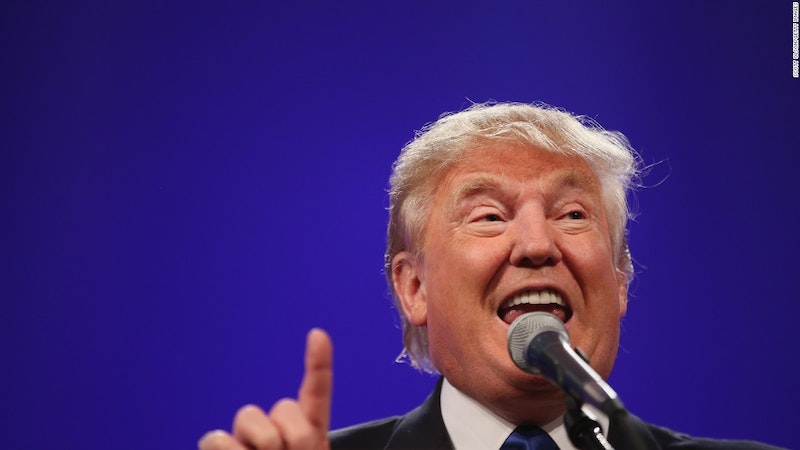 In the late-1980s, Spy magazine routinely referred to Donald Trump as a “short-fingered vulgarian,” back in the days when the magazine also used to say reality was beginning to feel like a then-futuristic novel titled 2000 AD: Casinos of the Fourth Reich. Low as my opinion is of humanity, I trust that many of the people now saying in polls that they’d vote for Trump for president mean that in the “Hey, wouldn’t it be hilarious if he actually became president?” sense.

I certainly don’t think there’ll be much genuine enthusiasm for him at the annual libertarian-dominated FreedomFest conference in Las Vegas, at which he‘s slated to speak this Saturday. As Reason magazine’s Brian Doherty observes, Trump may nowadays be a Republican, but he’s not much of a free-marketeer, favoring eminent domain, immigration restrictions, war, tariffs, Social Security, and Medicare.

I’d add that Trump has in the past called for a massive “one-time” confiscation of wealth, not just income, from the rich—and has a reputation in some quarters for being bad about paying his bills in full.

Luckily, Trump is just one of 17 (relatively well-known) Republican candidates, now that Jim Gilmore is jumping into the race. My favorite part of having so many candidates in the GOP primary is the small, random smattering of support each is getting in polls. We are very close to a marvelous situation in which every one of them is down in the single digits for percentage of Republican voter support.

If Trump drops a couple points from his post-announcement bump, Jeb Bush will be the only non-single-digits candidate among the Republicans, currently at 19 percent. Not too impressive, and you have to think Bush’s support is largely just name recognition, too, which is what political scientists say drives most voting. Ignorant voters see a name they know (with no major negative connotations they can recall), and they pull the lever and for a fleeting moment imagine they are part of a glorious process of governance.

In truth, democracy, like the candidates themselves, is a joke. No one should govern. I root for them all to do some time down in the humiliating single digits in the polls, where all politicians deserve to dwell.

In much the same way, in November 2000, when the endless recounts made it unclear who was going to be president, I was mainly rooting for the delay itself, hoping against hope it would just go on forever, and I would live to see America exist as a nation with no president at all, almost an anarchist paradise.