It’s Ladies' Night (by Another Name)!

Deny reality and it creeps back in. 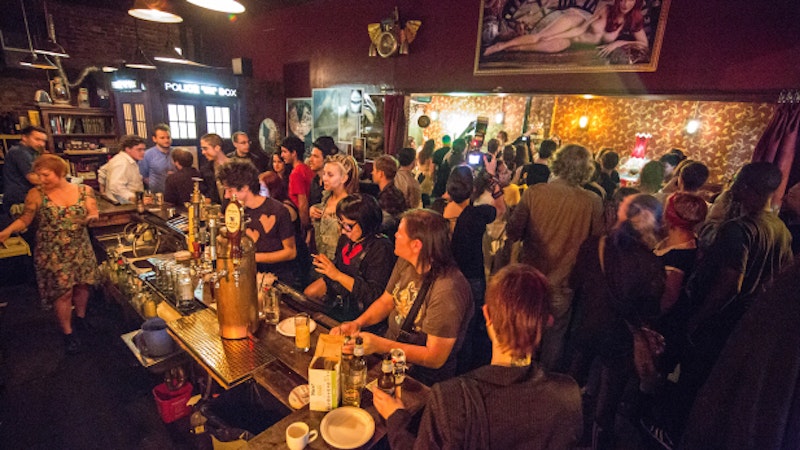 In theory, some of my fellow libertarians assure me, one could be a feminist without denying economic reality, denying biological reality, or calling upon the government to enforce your desires. In theory.

At the Brooklyn bar Way Station tonight, though, I think you’ll see what feminist practice more often looks like, and that’s a continual denial, on numerous fronts, of what’s really going on. The Way Station is the bar beloved by many of my fellow nerds that contains a replica of Doctor Who’s time machine, the TARDIS. That’s not the unrealistic part, though.

Where the alternate reality comes in is the bar’s pretense that if the crowds are bigger, when the bar plans to offer drinks for women at only 77 percent of the prices charged to men, it’s because of everyone’s zeal for social justice.

Ostensibly, women are paid only 77 percent of what men receive for the same work. That statistic, deployed by President Obama among others, is false and has been thoroughly debunked thanks to economists noting how the difference all but vanishes when you adjust for age, willingness to work long hours or in dangerous conditions, years spent in the labor force, and so on.

But forget all that. Let’s assume for present purposes we live in a timeline in which women really are arbitrarily being paid less by mean bosses, and no opportunistic bosses are taking note of it and swooping in to give those undervalued women raises and steal them away from the mean companies.

What’s more ridiculous here than the 77 percent assumption about salaries is the forgotten history of bars that’s been left behind in our political time travels, a history in which lawsuits, threats of lawsuits, and regulations frightened many bars away from having what we retrograde traditionalists once knew as “ladies’ night,” when drinks were commonly 50 percent off, sometimes 100 percent off, for women. It wasn’t the patriarchy that robbed women of that sweet deal. It was feminists and left-wing lawyers, who saw the policy as gender discrimination.

Well, sure it was. And sometimes there are very sane reasons we discriminate between the genders, such as noticing that men are much more likely to frequent your bar if you get lots of women to go there first—or noticing that females (of multiple species) tend to like it when males give them things, such as alcohol. They even expect gifts in many situations, and you’d better keep them happy if you don’t want them going to the next male, or the next bar. Ladies’ night was good for everyone, bar owner and customers of both genders alike.

Ah, but how to resurrect ladies’ night in an era when such manifest gender-consciousness might be frowned upon? Or when your nerdy-leftist clientele and surrounding nerdy-leftist borough might insist on principle that there are as many indeterminate and overlapping genders as Doctor Who has regenerations?

The 77 percent statistic! Ladies’ night is regenerated with a whole new rationale, one palatable to even angry drunk leftists! And so one more bit of make-believe is added the ongoing cosplay that is modern liberal reality.