It Usually Begins with Rand Paul 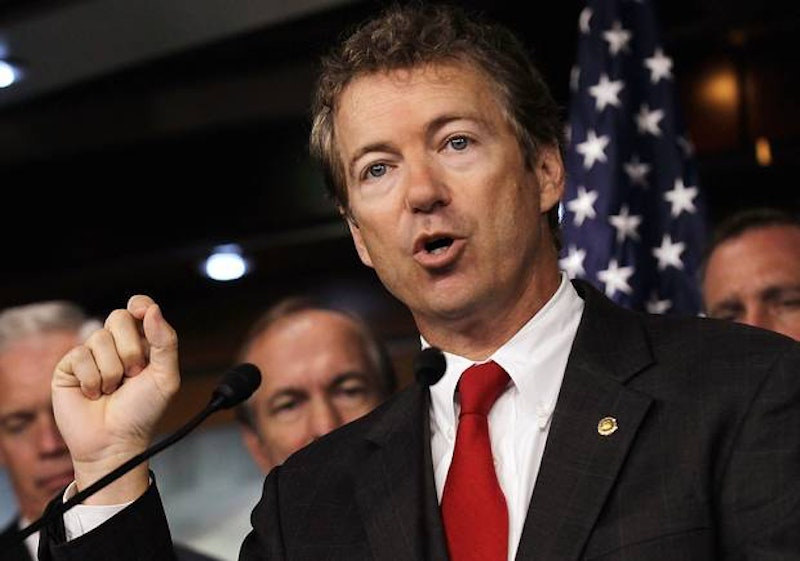 For a small political movement, libertarianism is notoriously prone to factions and in-fighting, increasingly so as the movement grows. Luckily, all the factions want human beings to be free. No faction wants humans enslaved. You wouldn’t know that from some of the things libertarianism’s critics say about it, though.

Even beyond the ignorant and relentless attacks from leftist sites such as Salon and RawStory (which must get an awful lot of clicks from misrepresenting libertarians as closet authoritarians, given how often they run such pieces), there are the critics who seize upon libertarians’ occasional defense of secession—breaking away from a central government—to suggest libertarians are just “neo-Confederates” in disguise.

Of course, those critics don’t necessarily associate secession with slavery when the topic of conversation is, say, Greece potentially exiting the EU or California periodically talking about breaking up into three states.

Some of the critics making charges of neo-Confederacy are themselves libertarians, ones understandably keen to avoid looking like crackpots, generally what we might very loosely call the Bicoastal faction, criticizing what we might very loosely call the Southern faction. Admittedly, that Southern faction includes some odd characters such as former congressman Ron Paul, his son and would-be Republican presidential candidate Rand Paul, and my acquaintance Jack Hunter, formerly the Confederate flag-wearing comedic pundit known as the Southern Avenger (mistakenly called the "Confederate Avenger” in one article by obsessive anti-Paul conservative columnist Jamie Kirchick).

All right, given the recent hullabaloo over the Confederate Flag, I can understand people freaking out over that last part. So can Jack, who has since said he was wrong to treat the Confederate flag as a harmless joke. But I can attest that his old Stars-and-Bars costume was directly influenced by his immense love of professional wrestling—the noble and hyper-expressive art form that has given us other ridiculous yet beloved regional characters such as the Iron Sheik—and not by any hatred of freedom.

Heck, Jack even wore that flag symbol on a luchador-style Mexican wrestler mask, so he can’t be too provincial.

Seriously, both Jack and his old boss Rand Paul have joined the calls for the Confederate flag to be taken down from state houses. In a world of increasingly short attention spans and increasingly intemperate online political bickering, it’s safest to err on the polite side with volatile and ambiguous political symbols, even if mixed in there somewhere with this symbol’s evil connotations were, at least in some people’s minds, some relatively healthy things like a rebellious spirit or regional pride, things that even appealed to some black owners of the flag (check YouTube for them if you don’t believe me).

With Twitter ire always turned up to 11 now, though, there is going to be less time for ambiguous symbols, mixed messages, and playful irony in political discourse, I fear. We can see those shrinking margins of communication error restricting stand-up comedy, dating protocols, and academic discourse lately, too. No one can count on having generous, patient listeners anymore, alas.

Political correctness isn’t so much a direct attack on free speech (as long as the government stays out of it) as it is an attack on nuance, often driven by the very people who consider themselves experts on the complex ambiguity of signs and signifiers.

Well, if libertarians, like many others, must be clearer than ever about what they really mean, I will just have to explain the movement very carefully on a daily basis right here at Splice.