One of the few liberals to tell the truth is The New Yorker’s Jeffrey Toobin. 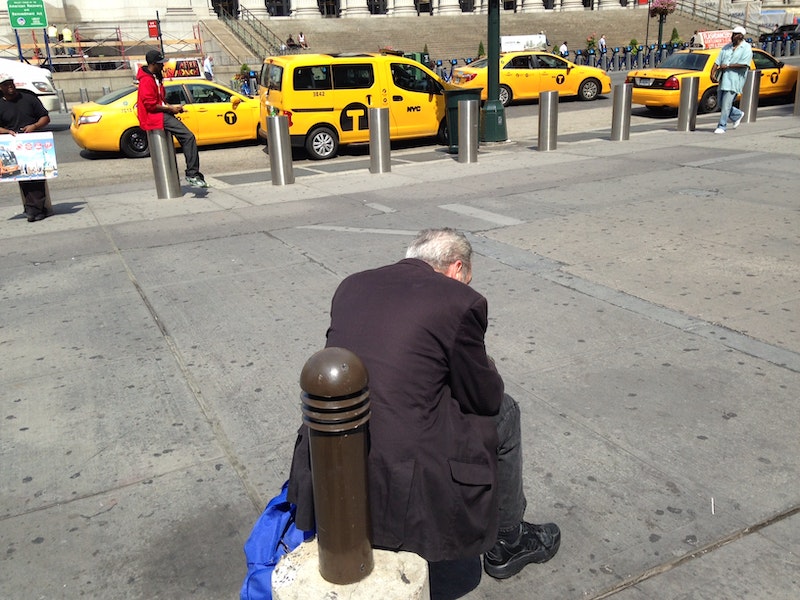 A couple of months ago, stepping outside New York’s dump called Pennsylvania Station around noon to have a smoke, I spied a down-and-out rummy (pictured above) and wondered if it was House Speaker John Boehner. On closer inspection, it appeared a reach: no suit and tie, scuffed shoes and though Boehner was then besieged by constant ridicule from Democrats for his propensity to unleash the waterworks and acceding to marching orders from the lower primates of the Republican Party, I reasoned he could afford his own pack of cigarettes. I didn’t care for the career hack Boehner then, and haven’t changed my mind since he announced last week that he’d resign from Congress at the end of October. Not that Boehner’s a lot different from scads of elected officials in Washington—keeping their job, perks, chumminess with sympathetic reporters and plotting a lobbyist future that means big bucks—but if the man had an original idea in his tenure as Speaker, perhaps actually fighting President Obama for a conservative cause, it escaped me.

So, good riddance, Mr. Boehner, and if you make several million on K St. in the next several years for making introductions and lunching at expensive D.C. restaurants, fine by me, but I’ll be glad not to see your mug quite as frequently, if at all. And here’s hoping that Boehner’s likely successor, Majority Leader Kevin McCarthy, a younger and more sprightly man, will actually do something as Speaker.

You’d never know that Boehner was lampooned non-stop on the web, cable talk shows and in newspapers, by the very Democrats who now—shedding the crocodile tears—rue the loss of a true adult in GOP, a man who wasn’t a hothead Tea Party kook who knew, as did Tip O’Neill and Ronald Reagan, that government just doesn’t work without compromise. As usual, New York Times op-ed slacker Frank Bruni was at the forefront of the mock concern, writing last Sunday that Boehner, the adult, was held hostage “by an extreme subgroup that… values theatrical protests over actual governing and is adolescent in its ideological vanity.” I didn’t require a barf bucket upon reading this nonsense just because it’s all so familiar.

Bruni, ruminating on why Boehner “grew weepy in the presences of the pope” last week, came to this idiotic conclusion: “I think he was crying, at least in part, for the ill fortunes and uncertain future of his pathologically self-destructive party. It’s something that should have all of us sobbing.”

Speak for yourself, Jack, though I’m assuming your own eyes will remain dry. Bruni’s giveaway was in a (deserved) spanking of Donald Trump, who “turns spectacle into a farce.” See, Trump is such a vile, immoral candidate that he has me in agreement with the likes of Bruni. But then the tell: “Democrats rejoice [over Trump’s continued dominance], which is understandable but shortsighted. Yes, complete Republican control of Washington isn’t in their interests, spells trouble on several policy fronts and could create a Supreme Court we’d be haunted by for a long time.”

In other words, if pragmatism wins the day in the GOP presidential race, and a Marco Rubio or John Kasich takes the White House, look out, we’re all screwed because of the SCOTUS nominations they’ll propose. Funny, I didn’t hear much complaining from Democrats when Chief Justice John Roberts gave Obama not one, but two victories in upholding Obamacare.

In fact, the only accurate reaction I’ve read from the liberal side was from Jeffrey Toobin in The New Yorker on Tuesday. Citing Boehner’s refusal to even put an immigration reform bill (endorsed by John McCain and Rubio, in addition to 66 other senators) to a vote in Congress in 2013, Toobin wrote that the Speaker was bullied by a small group of fringe members in his party, even though everyone knows that if the GOP hopes to remain relevant a decade from now it has to attract Hispanic voters. Toobin concludes, correctly I think, that Boehner’s “failures, political and substantive, were due mostly to cowardice… Boehner tried nothing, accomplished nothing, and lost his job anyway. It’s the legacy he deserves.”

Hurrah! A liberal pundit who tells the truth, unlike the majority of his cocktail party companions.