First be sure, then nuke it from orbit, says Todd Seavey. 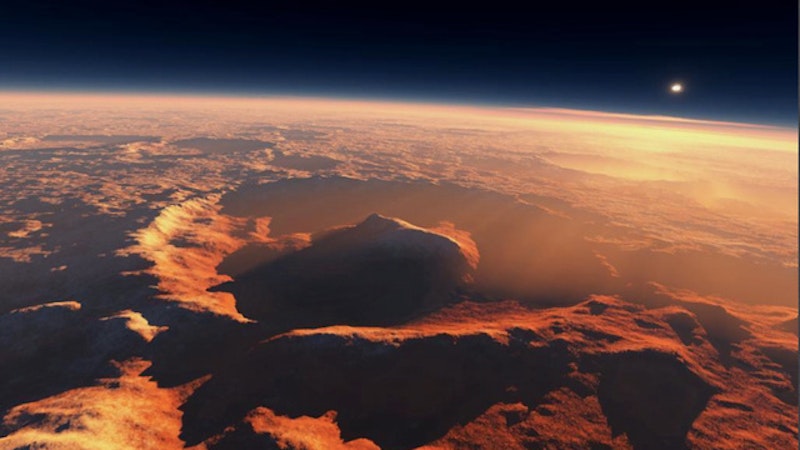 Even before NASA’s announcement that they found water (not Matt Damon) on Mars, I had a conversation with an environmentalist who thinks we should never subject Mars to “terraforming,” that is, remaking its environment to be more earthlike and thus hospitable to humans.

I can understand saying it’s bad enough we mess up one planet, we shouldn’t mess up a second, but one big tradeoff to keep in mind is that without messing up—some would say fixing—Mars, humanity may continue to be a species with all of its eggs in one basket. What if we could roughly double our odds of survival as a species by terraforming Mars? There certainly aren’t too many other candidate worlds within easy reach, absent the sudden invention of faster-than-light travel.

And so, I’m tempted to cautiously, provisionally endorse Elon Musk’s (sci-fi-inspired) plan to drop nuclear weapons on Mars’ polar caps, melting the water therein and making it easier to access the oxygen and other chemicals necessary to create a thicker, perhaps one distant day even breathable, atmosphere.

The new argument, though, will be that since Mars already has flowing water—in moist channels that I really think we ought to get in the habit of calling canals, as confused astronomers Schiaparelli and Lowell did—it may already have life, life other than us, life that might be annihilated if we dropped nukes.

Worst-case scenario, I suppose, it might even have life capable of retaliating, and ironically we would be the invaders of Mars after long imagining invasions from Mars (you may recall bizarre alien-invader scenarios being one of the things I discussed on Radio Free Brooklyn recently). More likely, we would only destroy something akin to microbes but in doing so erase the only other biosphere and evolutionary tree we have ever encountered—perhaps ever will.

This week of the Blood Moon and watery Mars, let us vow to check Mars very, very thoroughly for life—but finding none, be prepared to nuke it if that’s what it takes to turn those icecaps into the oceans of our people’s second home.

Luckily, there may be ways to melt icecaps without resort to nukes. Carl Sagan suggested breeding some sort of black, light-absorbing fungus capable of growing on the Martian ice caps, gradually warming them just enough to start the big melt. Nukes should only be a last resort, and we should take the time to research other options. But keep in mind that for all we know, the clock is ticking ever closer to the accidental or hostile use of nukes right here on Earth, and a wet, thick-atmosphered Mars may be our only real bomb shelter.