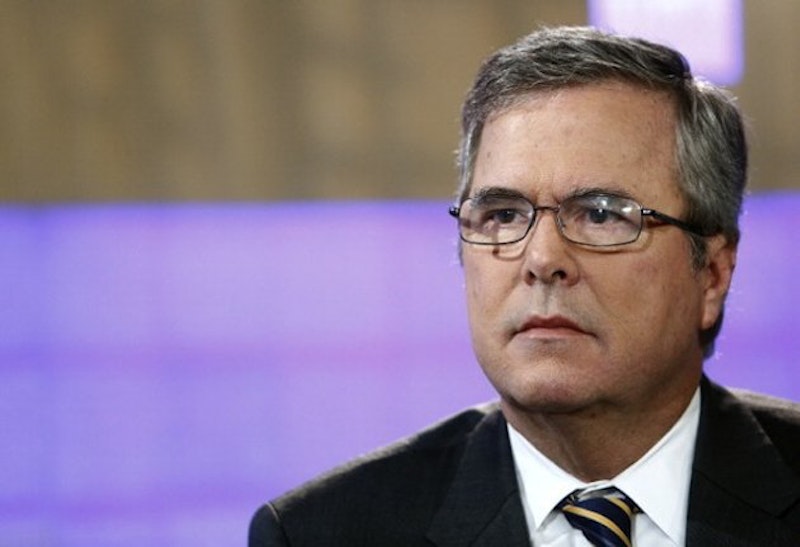 It’s conceivable that the weekend editors of The New York Times, understanding better than their superiors the daily’s diminished influence, have adopted a slap-dash approach to the Sunday print edition. You can picture a meeting of those nominally in charge, perhaps drinking a smart brand of vodka from paper cups—instead of the herbal tea from the 1990s—and, after deciding on what takeout to order, reclining in chairs, and saying, “Oh, fuck it, does it really matter what we put on the front page?” Fine, a little far-fetched, but judging by the April 5 edition of the Times—Easter Sunday, but holidays never mitigated the stench of gravitas and arrogance in the newsroom in the old days—it’s not far off.

How else to explain the above-the-fold stunner “Jeb Bush as Inevitable Choice? Republicans Say Not So Fast”? Despite the media’s ravenous desire for a 2016 general election that pits two “dynasties” against each other, was Jeb Bush’s nomination ever “inevitable”? Not outside the Northeast corridor, at least by my reckoning. The Times story says that Bush’s non-stop fundraising machine was “successful” in “driving” 2012 nominee Mitt Romney from the race; never mind that Romney’s brief flirtation with another run was most likely a mere attention-grabber from the bored and ham-handed former candidate, one more example that presidential politics is a very strong narcotic.

Furthermore, reporters Nicholas Confessore and Maggie Haberman—with additional reporting from Michael Barbaro and Trip Gabriel, as if a softball story required four people; talk about misallocation of resources—write: “For the Bush family, inevitability is not what it used to be.” Come again? True, in 1999, the GOP, in search of a younger candidate, moved quickly to George W. Bush, but his father failed in his 1980 run against Ronald Reagan, and, like most of his government posts, was given the veep slot as a consolation prize. And despite his next-in-line position in ’88, what Republicans hoped would be a de facto third Reagan term; the senior Bush’s primary run was filled with bumps.

Truth is, this story could’ve been—and maybe was—written in December when Jeb Bush was playing footsie with the media and publicly engaging in corny soul-searching gambits, as in how a run would have to be squared with his wife, while GOP establishment machers were already bundling millions of dollars. Nonetheless, even as Jeb supporters, according to the Times, began using the unfortunate phrase “shock and awe” to describe their man’s gobbling up big donors, that had no effect on Gov. Scott Walker, Sen. Rand Paul and the kooky Sen. Ted Cruz. And if a Jeb nomination was preordained, it would’ve followed that Sen. Marco Rubio quickly bowed out, acceding to his friend and fellow Floridian. In fact, the noise for Rubio—right now, at least—is getting louder and louder.

There’s almost nothing new in this Times story: it’s just recycled reports from the campaign, an anecdote from a dissatisfied Tea Party member, pro-Israel hawk, and mega-donor Sheldon Adelson getting pissed off that James Baker III criticized Benjamin Netanyahu, and a reminder that Jeb’s claimed he’s “his own man.” (I guess that’s why Baker is still acting as Bush consigliore emeritus.) And this scintillating quote from Scott Reed, Bob Dole’s ’96 campaign manager, who is allegedly “neutral” in the ’16 race: “The smart money is taking it slower and waiting to see who runs and how these candidates develop a platform. Raising money is an important part of the game. But it’s not the whole game.”

I don’t think Bush has a real chance at the nomination: as written previously, his last name is poison and he shows no inclinations of at least reaching détente with the GOP wing that abhors immigration and education reform. That aside, the real question is why the Times wasted its supposed valuable “real estate” on a non-story. What the hell, “Roll another one, dudes, just like the other one.”