He's scary, but not because he's electable. 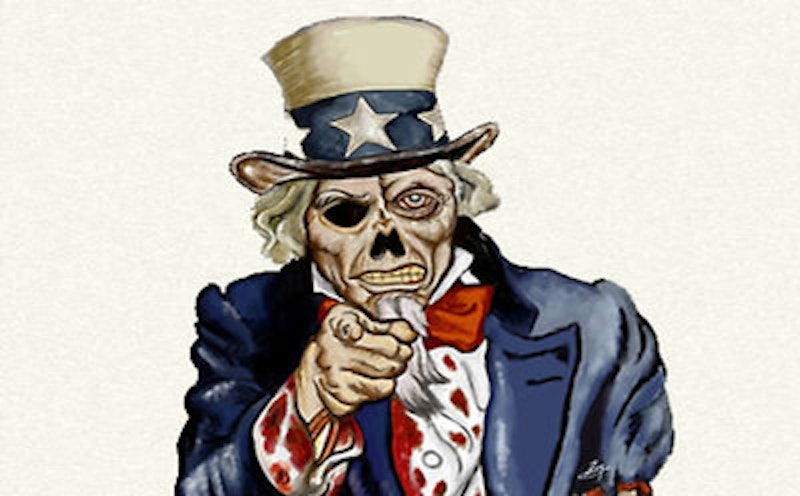 As a leftie, I'll admit it—I find Scott Walker scary. But not for the reason postulated by Splice editor Russ Smith in last week's column. I don't think Walker has an especially good chance in a general election; I'm scared of him because of what he might do if he actually wins the White House.

Smith argues that liberal pundits like Michael Tomasky are pushing Jeb Bush because he can't win. That seems conspiratorial. Pundits are probably pushing Bush because (a) he's got a relatively high national profile, and (b) his policies are more congenial to liberals on issues like immigration. That's why I'm hesitantly more positive on Bush than on most of the rest of the field.

Unlike Smith, I don't think Jeb's last name is likely to be damaging in a general election. George W. was very unpopular when he left office, but the Republican Party hasn't repudiated his legacy in any meaningful way. Republicans have not wholesale blamed Bush for Iraq or for economic turmoil. As a result, memories of his presidency at this point are mostly a partisan issue.  Anyone who wouldn't vote for a Bush is probably a Democrat anyway.

Electability is mostly beside the point in general election contests. Mitt Romney was supposed to be a horrible candidate, and stumbled through a gaffe-ridden campaign. But in 2012 he did just about exactly as well as economic fundamentals-based models predicted a generic Republican would do against Obama.

Candidates can hurt themselves if they make particularly egregious tactical blunders. Al Gore should’ve won the 2000 election easily according to economic models, but he distanced himself from Bill Clinton so effectively that he gave up much of the advantage of incumbency, according to analysts. He also hurt himself by running too far to the left; candidates can lose a point or two if they seem to be outside the mainstream.

There's no way to know how well or poorly Scott Walker will campaign on a national level, but based on what we know now, Bush is the better candidate. Walker has less high profile national experience, so there's more likely to be some consequential skeleton in the closet. And his persona, at least at the moment, is more polarizing. He has a very conservative reputation as a union buster; that won't disqualify him, but it could, again, lose him a point compared to someone like Bush with a more moderate reputation.

Although Walker may be less likely to beat Hillary Clinton, that doesn't mean he can't win. If the economy tanks and we have another recession, just about anyone that gets the Republicans nominate can and will win, up to and including Mike Huckabee. Part of the nomination process is to weed out candidates who are unserious enough that they could really damage the party's chances, which is why Ben Carson is not going to be the Republican nominee. But once you get that nomination, really no matter who you are, you've got a very good chance of becoming president. That applies to Bush, Walker, Chris Christie and even Rick Santorum. If in 2016, people are really upset with how the Democratic Party is governing, they will elect someone who is not a Democrat, and the exact name or character of that someone who is not a Democrat will be largely beside the point.

Again, that's why, for a liberal, Scott Walker is scary. His political career so far in Wisconsin has been about kicking unions. I think unions are valuable, and one of the few protections working people have from a government that’s mostly dedicated to the proposition that capitalists should step on everybody else. The thought of Walker doing on a national level what he has done in Wisconsin makes me ill. Even if I think he's slightly less electable than Jeb Bush, the risk isn't worth it, anymore than it would be worth it to root for cultural conservative nutjobs like Huckabee or Santorum. This isn't a game here; this is the presidency of the United States. I don't want an anti-union goon like Walker in the Oval Office, even if his nomination might in theory give some small edge to Hillary Clinton.