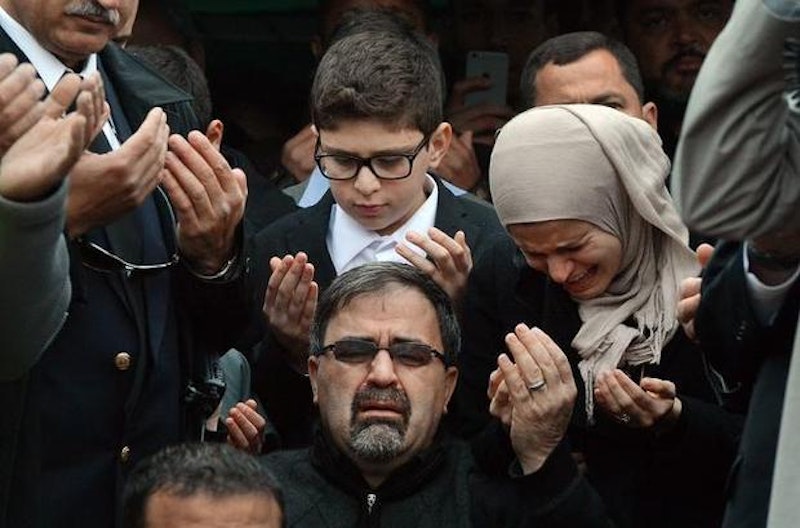 On last report, the police still didn't know why the Chapel Hill shooter did what he did. He'd been hassling his victims about who got to park where at the condominium. But the father of two of the victims, the two girls, said his oldest daughter “had told him that she and her husband had been harassed for their appearance by a neighbor who was wearing a gun on his belt.” That's in the words of The New York Times, and the man with the belt was definitely Craig Stephen Hicks, the killer. On the other hand, the murderer had posted on Facebook about his contempt for people who opposed building a Muslim community center near Ground Zero. The killer's widow declared, “I can say with absolute belief that this incident had nothing to do with religion or the victims’ faith, but it was related to a longstanding parking dispute that my husband had with the neighbors.” Maybe she knows the thinking of her pro-gay, Romney-hating, atheist “gun-toting liberal” (his words) of a husband. But there's still the recollection of the dead girls' father. What's the answer? We don't know yet.

But Philip Gourevitch does. The New Yorker has posted his thoughts on the mess, and they are evidence that the Internet has now spread its damp decay to the highest redoubts. The piece is like an extended comment at a liberal blog. Not that liberal commenters are more fatuous than their conservative counterparts. But most are mouthy dopes who repeat the ideas favored by their chosen herd. When liberal, they admire flossy writing and long for news of bigoted oppression. Gourevitch has provided a dream specimen of what they could do if only they could get their act together. His prose winds in, out and around some lumpy assumptions that he mistakes for thoughts.

Those damn police, fumes Gourevitch. They aren't saying Hicks did it because he hates Muslims. Therefore, we're being asked to swallow a story. Some key phrases deployed in the Gourevitch piece:

•    “we’re being told to believe”
•    “we’re being asked to imagine”
•    “his wife wanted everyone to believe”
•    “it seems we are also supposed to be relieved by”
•    “with law-enforcement sounding like Hicks-family spin doctors”
•    “everyone who’s singing this tune—the police, the wife, the prosecutor—seems to think that it’s reassuring”

What's missing: any evidence that the police, the Hicks widow or the prosecutor is pushing an agenda, as opposed to reporting the bits they know about this latest episode of human chaos. Gourevitch doesn't even give an argument as to why their statements don't hold up. The closest he comes is to sniff. A “difference of opinion about parking-lot etiquette,” he says, is being used to explain a man's decision to assault his neighbors and “shoot them repeatedly—in the head, according to their family members.” He doesn't say why that couldn't be the explanation; he lets the sniff cover that. Apparently, homicidal maniacs need a marquee reason to do what they do. Being out of their heads about turf and respect and not backing down—that's enough to start the First World War, but it can't cause a shooting in North Carolina.

Maybe Hicks was a bigot. Maybe people who believed in Allah made him especially mad over parking places. Maybe just Allah was enough and that got him crazy. Maybe not and his thing was just turf. We're finding out. In the meantime, Gourevitch can't figure out why the people quoted in the newspapers don't end the suspense and shout hate crime. I'll tell him a secret. We know America is a land where nuts can get guns and start shooting. We don't know it's a land where Muslims are shot for being Muslim. We really hope it isn't. If it is, a country that's already frayed will have yet another rip in its fabric. About two and a half million Americans will live in fear and wonder (again) if they're wanted in their own nation. Let the facts be what they are. But don't root for disaster.