The wealthy grandmother is no longer seen as a “feminazi.” 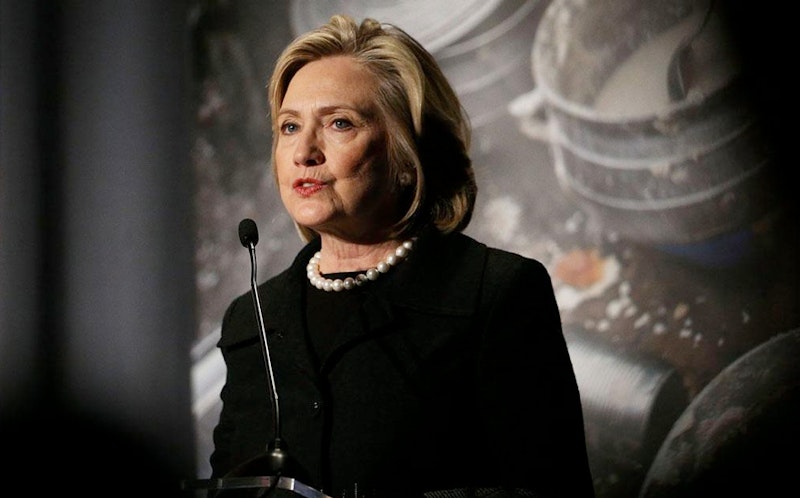 I’ve no idea who’s in charge of soliciting articles for The Daily Beast, but the deadline must’ve been pounding hard for McGill professor/historian Gil Troy’s Feb. 15 article, “How To Handle Hillary Haters,” to make the cut. Granted, the standards bar at The Daily Beast is so low that even a greased squirrel might not slither under it, but isn’t the “Hillary Hater” a trope that was extinguished once her husband left office in 2001? After saying that “Hillary hatred has been particularly virulent and irrational,” Troy takes willing readers on a nostalgic tour of animus against the former First Lady—including the claim that the hate began in 1980s when Bill was Arkansas’ governor, a time when less than one percent (a generous estimate) of Americans had even heard of her—but Benghazi aside, since she successfully carpetbagged a New York Senate seat in 2000, the “hate” directed at her has been negligible, certainly compared to Barack Obama and George Bush. (Has anyone said that Hillary doesn’t “love America,” as attention-deprived Rudy Giuliani slung at Obama, or that she’s the equivalent of Hitler, a common left-wing charge thrown at Bush?) Back in ’98, Hillary coined (or one of her advisers did) the phrase “vast right-wing conspiracy” in early reaction to Bill’s relationship with Monica Lewinsky, and that generated a lot of conversation, though I’d venture it was laughter or sheer incredulity, rather than hatred. When Bill fessed up about “that woman” Lewinsky, Hillary expertly played the sympathy card, paving the way for her Senate run.

Besides, in 2016, when Hillary’s expected to run for president against whomever the chaotic Republican Party chooses, a large percentage of voters will have either forgotten her “co-presidency,” Troopergate, Vince Foster, Paula Jones, cattle futures and her slur against Tammy Wynette, or will be too young to remember those staples of tabloids and talk radio. That Hillary consistently lands in America’s list of “Most Admired” women—which is beyond me, but Michelle Obama and Oprah also feel the Gallup Poll love—and crushes any potential Democratic challenger in the early presidential polls, as well as leads all GOP aspirants, appears lost on Troy. Aside from a very small segment of rabid conservatives, the types who champion the likes of demagogue Sen. Ted Cruz and religious zealots Rick Santorum and Mike Huckabee, there’s just not much to “hate” about Hillary. I wouldn’t vote for her myself, but the vitriol I felt in the 90s has been extinguished: in the current decade she’s just another multimillionaire Democrat who’s trying some way, any way, to convince Americans she’s for the “little people” who drive their own cars and lose sleep over mortgage payments or getting downsized. Translated: a phony-baloney politician who wants to be president.

So far, most Democrats are ignoring the recent reports about the millions upon millions the Clinton Foundation—ostensibly a charity, although most of that “charity” is used for promoting the Clintons—is raking in from foreign contributors. I suppose in a general election, the GOP could slam populist—and the world’s first grandmother!—Hillary for this fundraising, but unless the last name is Koch, the Clinton teflon will probably continue. In Friday’s Wall Street Journal, op-ed columnist Kimberley Strassel [paywall] wrote about the ethical dilemma facing Democrats: “It’s hard to label your GOP opponent anti-woman when the Clinton Foundation is funded by countries that bar women from voting and driving like Saudi Arabia. It’s hard to call your GOP opponent a heartless capitalist—out of tune with middle-class anxieties—when you owe your foundation’s soul to Canadian mining magnates and Ethiopian construction billionaires.”

I suspect Strassel, a conservative, was writing out of frustration. The machinations of the Clinton Foundation are too arcane a topic to boil down to a slogan, so it won’t gain traction. The way for a Republican to defeat Hillary, as I’ve written before, is to successfully expose the hypocrisy of an extraordinarily wealthy woman claiming she cares about the disappearing middle class, rather than her own career.

But when Gil Troy writes “paranoids” will soon yell, “the Hillary haters are coming,” he’s channeling a different era. Hillary Clinton has defeated the “haters” like Rush Limbaugh simply by outlasting them.