The Chapel Hill Shootings Aren't About Atheism or Terrorism

They're about America's gun problem. 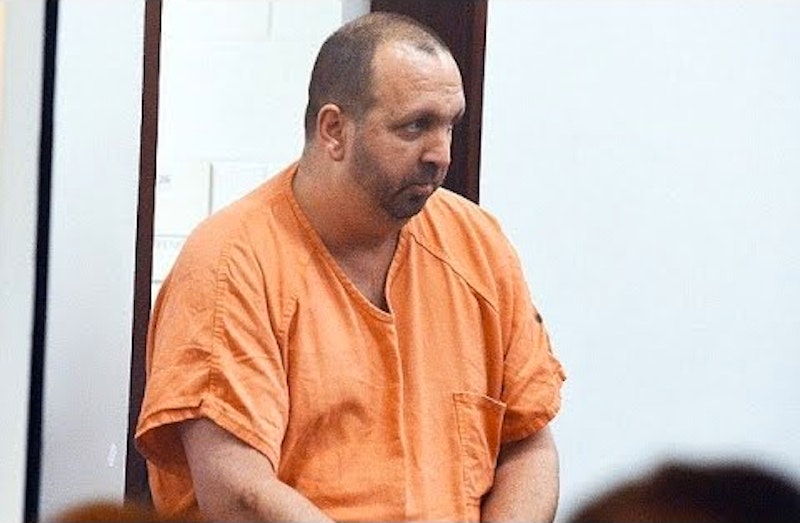 A very disturbed man who was in possession of a large cache of weapons, Craig Hicks, gunned down three young Muslims in a cold-blooded, execution-style murder last week in Chapel Hill, North Carolina. In a just world the misanthropic, dyspeptic Hicks would now be dead and the innocent Palestinian-Americans—Deah Barakat, Yusor Abu-Salha, and Razan Abu-Salha—would continue as productive citizens of this country. But this is the US circa 2015 where innocents get gunned down at a rate that makes your head spin. You can be a 12-year-old playing with a fake gun in a playground one minute and dead from a cop's bullet the next. No questions asked. You can even get shot dead by your two-year-old while shopping in WalMart.

Hicks, who a neighbor described as appearing very angry whenever she saw him, described himself in online posts as a "gun-toting atheist." People who describe themselves as "gun-toting" are generally looking for a little "gun action." Atheists, on the other hand are not, as not believing in a higher power does not make one prone to violence. Hicks' victims were Muslims. To many speculators, the type who reach their conclusions first and work backwards to find supporting arguments, this apparently indicates that Hicks represents some "atheist movement" that is targeting Muslims. All over social media you can see this simplistic, premature connection. The Palestinian government has already made the determination that Hicks' depraved actions constitute "terrorism" and has called on the US to allow its investigators on the murder probe. That’s not a great precedent, but we'll see how that plays out.

What we know about Hicks is sketchy, though this presents no barrier to those wanting to promote their narrative that Hicks, stoked up by the "hate rhetoric" of prominent "atheists" such as Richard Dawkins, Sam Harris and Bill Maher, represents a violent atheist backlash that has Islam squarely in its crosshairs. It’s known there was an ongoing parking dispute between Hicks and his victims. Hicks' wife (who, for the record, is divorcing him), has stated that the murders had nothing to do with race and that they were connected to the parking problem. Imad Ahmad, Barakat's former roommate, said the victims had faced Hicks' wrath before over the parking dispute, describing a time when Hicks showed up at their door with a gun on his hip and a bone to pick.

What we’re seeing now, in the aftermath of the tragedy, is Hicks called both a terrorist and a militant atheist who targeted Muslims. The problem with such allegations is that, at least at this point, it’s not difficult to construct an alternative narrative that demonstrates that he is neither of these. As for being a terrorist, there is credible evidence that Hicks was genuinely—though not necessarily justifiably—upset over a perceived parking problem. His estranged wife and an ex-roommate have attested to this. If Hicks acted at least partially out of anger, how can he be called a terrorist? Terrorists target people without emotion. And yes, Hicks had a large cache of weapons in his residence, which some are saying is evidence he was a terrorist, but nobody really knows. Many Americans are weapons enthusiasts and aren’t terrorists. The hard-core Second Amendment crowd tends to take weapons collecting to extremes.

As for Hicks being an angry atheist who hates Muslims, the shrill arguments along these lines don't hold up to much scrutiny either. The word "atheist” is derived from the Greek "a-theos," meaning "without gods." It refers to absence of belief in a god, not antipathy towards belief in one. Numerous studies have shown that atheists are less inclined to condone violence and generally more tolerant than people of faith. Take a closer look at some of the louder "Christians" on social media if you doubt this one. Many of them are overflowing with hate. There is no atheist "scripture" out full of violence such as the Bible and Koran are. A lack of faith does not indicate any particular inclination towards any type behavior whatsoever, unlike the faith of other religions that is often used to justify violence.

Perhaps the misunderstanding is related the Dawkins/Harris/Maher troika who the misinformed tend to view as the spokesmen for all atheists when, in fact, they are beyond mere atheism. These three are anti-theists, meaning they go beyond merely lacking faith in a higher power to the point of actively opposing the concept of faith. The big three "new atheists," as they are called, take atheism to another level, loudly proclaiming that Islam and Christianity are making negative contributions to the world. However vociferous in their critiques of the major faith-based religions, they do not hate individual Muslims or Christians (disrespect perhaps), nor do they wish or espouse violence upon them.

Plenty of confused people conflate criticism of a movement or ideology with hate, and this sort of person (almost always self-described as a "liberal") tends to cavalierly throw around such terms as "Islamophobia" and "racism" (who knew Islam was a race?) in response to criticism of religious practices and doctrines. When rel'igion (and race?) is involved, all logic goes out the window. Most of what I read about religion on the Internet or hear about it from TV commentators is absolute nonsense. Supposed "experts" on religion, such as Reza Aslan, tend to more closely resemble snake oil salesmen.

My guess for what happened in Chapel Hill is that Craig Hicks is one of those white men who are just angry at life in general. His favorite movie is Falling Down, the one where Michael Douglas plays the engineer who goes on a killing spree when his life goes south. I have a feeling that Hicks had been toying with the idea of killing for some time and that he finally built up enough steam to explode last week. Getting shot in the U.S. doesn't necessarily mean much in the current environment. If a gun enthusiast gets out of bed on the wrong side and you happen to piss him off that day, he might empty his chamber into you.

To me, Hicks looks like an equal opportunity hater rather than a terrorist. A terrorist has a political agenda and I don't see that with this angry fellow. People get upset because white men are never called terrorists but, while a valid claim in some cases, that doesn’t apply here. Attributing the killings to the shooter's atheism is equally meritless. Loss of faith is often a gradual process that resembles the slow break-up of a relationship—a gradual slide that does not lead to one suddenly espousing some new doctrine. It's more like a slow escape, and it doesn’t lead to violence. Unlike Islam and Christianity, there’s no atheist jihad or any call for "an eye for an eye."

The focus on the Chapel Hill murders shouldn’t be on terrorism or atheism, but rather on the American gun problem—that's what this issue is about—and the Palestinian government can't help us solve this with one with a separate investigation. Just about anyone in this country can accumulate a cache of weapons like Craig Hicks did, and a certain percentage of these men will have anger issues or personality disorders that will make them a danger to the people they come into contact with. When that happens, you get the results Chapel Hill last week—three more people added to the annual tally of 30,000 gun-related deaths. The victims happened to be Muslim. The next time it will be some other demographic. The only thing that's sure is that the killings will continue.