The Spastic Savagery of “On Point” 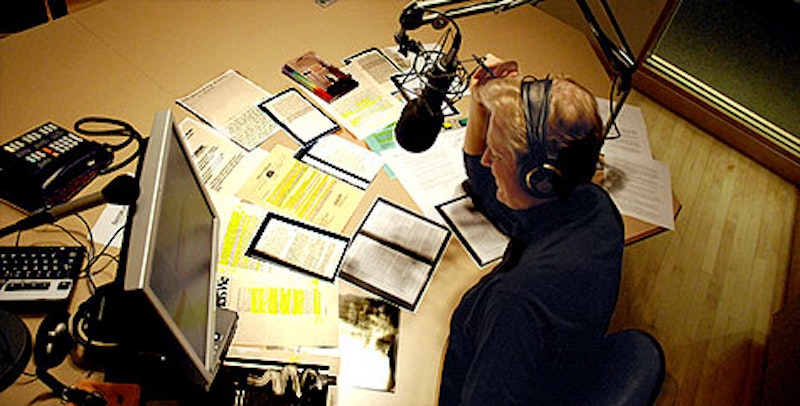 The zest quotient of National Public Radio increases considerably whenever the programming gear-shifts into an “On Point” installment. The praise or blame lies entirely with host Tom Ashbrook, who ricochets manically between sub-themes, quarterbacking the garrulous hot potato that is his raging, excitable id into the hands of one panelist briefly before snatching it away to lob it to another panelist.

His voice is flood of gravel, question marks, and incredulity, so that a single statement is capable of jabbing the listener in the midsection multiple times before it ends—as though he doesn’t quite trust that his words carry enough weight on their own. Blustered inflection is a broadsword he wields indiscriminately, whether the subject is foreign affairs, Empire, or crumbling highway infrastructure in America.

Each sentence follows breathlessly and immediately after the next, so that Ashbrook’s needling rejoinders are a sort of yellow jacket-fueled stream-of-consciousness. At peak indignation he places undue stress on syllables, and laughter catches in his throat. “On Point” is the only radio call-in show I’ve ever listened to where I can easily imagine assistants lurking, just outside the studio, with oxygen masks and tanks at the ready.

Ashbrook took a leave of absence late last year, to care for his wife, who recently succumbed to the effects of a long illness. There are moments—a lot of them—when I wonder if his zeal for whatever topic happens to be at hand isn’t an act of transference, subsuming the various stages of grief beneath torrents of sharp, interlocking invective before rearing back for a millisecond and pouncing, teeth and claws desperate for purchase, into another three dozen torrents.