There is no point in making children suffer through public school in the name of some progressive cause. 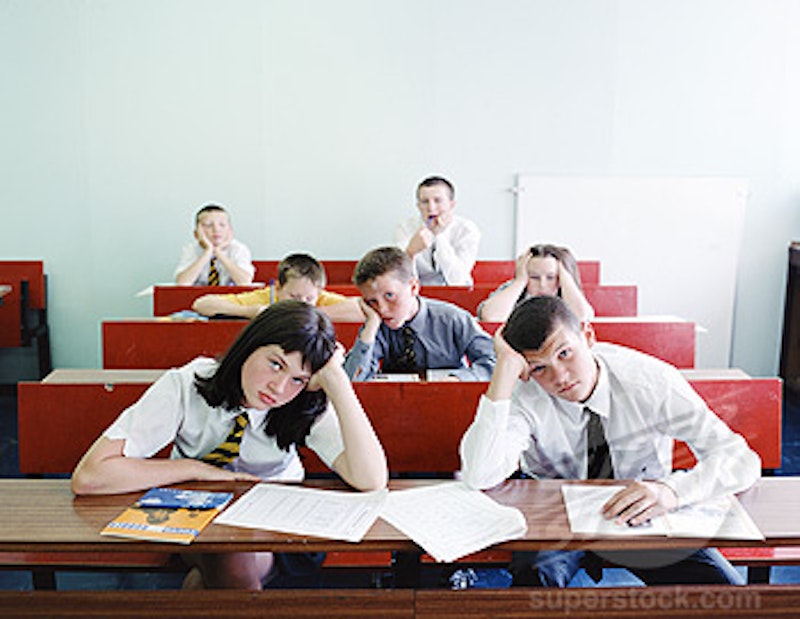 My son is eight years old, which means that he's reached the point where I can remember with some clarity what it was like to be his age. Most of those memories are pleasant; I always got along with my parents and peers, and generally had a happy childhood.

However, like lots of kids in second grade, I was bullied; most consistently by a boy named David. I remember one time in particular—we'd had an art class in which we had cut figures out of construction paper. There were a pile of multi-colored scraps which the teacher was going to throw out, but I said I wanted them, mostly because one piece looked like a giraffe. The teacher was slightly incredulous, but allowed me to take them all. So I walked out of school with my hands full of worthless construction paper, at which point, David and two of his friends jumped me. With my hands full, I was even less able to defend myself than usual, so instead I hunched over and let them hit me. Luckily, a fifth-grade crossing guard came over and pulled them off before I was much hurt.

I'm not sure what became of the construction paper scraps; they probably sat in my room for a couple of weeks before getting thrown out. David, though, stopped harassing me eventually. Later he shot himself in the heart in a suicide attempt. He survived, but died a few years later—whether from complications, or because he tried again and succeeded, I never found out.

As for me, well, I don't think the bullying blighted my life. It's not something I think about very often, and as I said, I usually think of my childhood (and my adulthood, for that matter) as being quite happy, all things considered. Still, the bullying was not fun, and prompted a certain amount of angst—I talked about it a lot with my parents (who were sympathetic), and spent some sleepless nights over it. It's not something I wish on my own child, which is one among many reasons that he is not going to the public schools. Instead, he's at a private Waldorf school where there are nine kids in his class, and where the teachers, unencumbered by the public school's Stygian mounds of administrative horseshit, have the time to intercept and smooth out interpersonal nastiness themselves, rather than farming that task out to fifth-grade crossing guards.

I've been thinking about this in light of Dana Goldstein’s recent article at Slate, in which she chastised liberals and progressives for homeschooling their kids (or, in progressive jargon, "unschooling" their kids.) Goldstein argues that progressive unschoolers caricature the authoritarianism of the public schools in order to hide their privileged distaste for the poor.

"This overheated hostility toward public schools runs throughout the new literature on liberal homeschooling, and reveals what is so fundamentally illiberal about the trend: It is rooted in distrust of the public sphere, in class privilege, and in the dated presumption that children hail from two-parent families, in which at least one parent can afford (and wants) to take significant time away from paid work in order to manage a process—education—that most parents entrust to the community at-large."

Goldstein's critique is, as I said, specifically directed at homeschoolers—but its force seems to me to apply just about equally to private schooling. Sending your kids to a private school is very much a choice rooted in class privilege, even if your school has reasonable tuition and some provisions for financial aid (as mine does.) And private schooling, like homeschooling, is often based in distrust of government. Or, at least, our decision to send our son to private school is rooted in distrust of government, since I firmly believe that the state is much more interested in testing, quantifying, and boring my child than it is in teaching him anything.

So I agree with Goldstein to no small extent. Public compulsory schooling is, or has been, or can be a progressive endeavor in many ways. As Goldstein says, it can promote racial integration (though many schools in Chicago, where I live, are still quite segregated.) It can promote socioeconomic integration (though in Chicago the much ballyhooed charter school system seems mostly designed to allow the more privileged to escape their shitty local schools.) It can in theory "use culturally relevant, high-standards curricula to engage even the most disadvantaged students," as Goldstein says. In theory.

But be that as it may. The point is that public schools are about collective effort, and about the belief that state intervention can create better human beings and a better nation. That is at least one version of progressivism. In contrast, homeschooling and private schooling is committed to a more conservative viewpoint—to the idea that parents, not the state, must be responsible for their own children's education and their own children's happiness.

But conservative or progressive, the fact is that my son currently goes to a school where he isn't tested, isn't bullied, and doesn't get pointless worksheets for homework. In the past, when he's had to miss a day of school, he's cried. If sending him to that school makes me a traitor to the cause—well, then I'm a traitor to the cause. I can live with that.

Which is to say, the reason people mistrust schools is not necessarily because they're selfish and privileged. It's because America's schools fucking suck—and poor students, and minority students, and teachers of all backgrounds will be the first ones to tell you so. Goldstein encourages progressives to enter the public schools and try to change them—to, in other words, perform a great social experiment. I know that for progressives social experiments are almost irresistible, but if you're telling me to use my kid as a guinea pig, I think somehow I'll resist. I don't know how to fix America's schools, and Goldstein, who's barely willing to admit there's a problem, doesn't know how to fix them either. But I can send my son to a school that's better than the one I went to when I was his age. And since I feel considerably more responsibility to him than to some vaguely defined progressive cause, that's what I'm going to do.

As this indicates, the unfortunate fact is that linking American schools and liberalism doesn't validate schools so much as it undermines progressivism. If progressive politics requires us to treat our children, and everybody's children, not as loved ones but as quantifiable chits in a master egalitarian plan, then most of us are going to rightfully abandon progressive politics.

And this is, perhaps, why homeschooling, or unschooling, or other rebellions against our terrible school system are, in fact, progressive. In our society, where children are more often seen as policy placeholders, it is arguably a radical act to treat them as individuals. It's not okay for kids to be miserable now because you think that will make a better future later. It's not okay for kids to sit for six hours at a clip at their desks studying pointless crap so that politicians can have quantitative fodder with which to bust teacher's unions. It's not okay, in short, to treat kids as if they're not people. The best progressive traditions aren't the ones that demand that everyone abandon their own consciences for the good of the state. The best progressive traditions, on the contrary, are those that insist on the humanity and dignity of the marginalized and powerless—and that most certainly includes children.