The secret behind the sort of frontrunner’s double victory may be that Republicans voted for him. 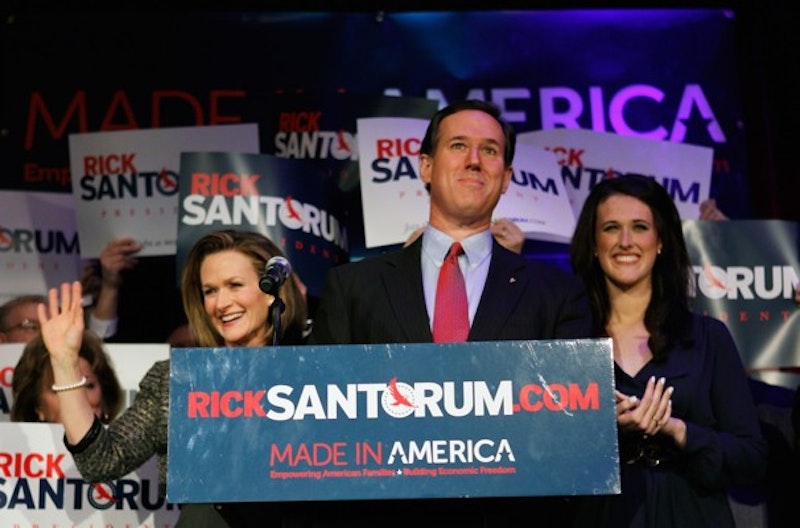 Rick Santorum has a daughter who looks a bit like him and a bit like Joan Cusack. She’s up there next to him while he breaks the news to his supporters that he didn’t win the Michigan primary. Actually he doesn’t get around to telling them as much: He’s too busy with Barack Obama’s refusal to allow drilling, or enough drilling, and with the size of Tioga, North Dakota, and especially with the record of Santorum’s mother as a wage earner. His daughter nods and smiles, which she does with a good sport wince. She’s a tall young lady, but she keeps her head and shoulders down and forward. She looks like the best friend in a romantic comedy, and that’s not just because of the Cusack set to her nose and chin. She has to combine perkiness and a kind of self-abnegation, as if she were apologizing for showing so much enthusiasm for what dad has to say.

As he warms up, Santorum becomes more of a wise guy. “Remember that document, what’s it called─oh, yeah, it’s the U.S. Constitution. That’s it, right?” This trait may have cost him the Michigan primary, where he wound up three points behind Mitt Romney (38% to 41%) after the polls showed a lot of seesawing back and forth. Maybe he shouldn’t have said that John F. Kennedy on separation of church and state made him want to throw up.

Santorum is hearty, which is not the same as being jolly. He’s a bruiser, a big guy who leans into ideas and vowels. “They were ruled by highly educated, noble people,” he says, remembering the colonists and the damn British. “The uniforms were cri-i-i-isp and stiff.” As you might notice from that second adjective, his Michigan speech continues Santorum’s policy of feeding material to the sniggering forces of gaydom. He says he wants “a free society from the bottom up. That’s how America works best, from the bottom up. And that’s the solutions that we’re going to propose for America, the bottom up.”

But it was Mitt Romney’s night: two primaries, two wins, and the one in Arizona was a blowout, 47% to Santorum’s 27%. Pundits haven’t spent much energy on explaining why. Mormons made up just 14% of the voters in the Arizona primary, according to CNN’s exit polls. CNN also found that evangelicals, who sometimes favor Santorum, made up 36% of the vote in Arizona and 39% in Michigan, which is not a big difference. Santorum won a majority of the evangelicals in Michigan and a plurality in Arizona—a miserable plurality, with just one point between him and Romney. In Michigan, Santorum won pluralities of all income groups below $100,000 a year. In Arizona, Romney won pluralities of all income groups except $200,000 and up, which he won by a majority.

One difference between the states is that people who call themselves Republicans made up just 60% of the vote in Michigan, compared with 72% in Arizona. In both states Romney won self-described Republicans quite solidly, which is not a bad thing for the would-be Republican nominee. Santorum was begging for Democrats to cross over and vote for him in Michigan, an idea that Romney deplored though (as has been much pointed out) he used to brag about doing his own crossovers when in the voting booth. To Santorum’s credit, Public Policy Polling found that 55% of the Michigan Democrats who voted for him said they did so because they liked him, not because they wanted to screw up Romney.

For his part, Romney appeared unscrewed when he gave his victory speech. For once he seemed at ease. It’s a minor jolt to see him speaking as if his jaw belonged on his face. He spoke of tyranny and Washington vs. the people and Obama allegedly saying he was the fourth-best president. Everybody cheered, and the only background faces to distract attention belonged to a wide, solidly built black couple; the woman of the pair had a blond wig. Romney beamed and jutted his jaw, and the black couple applauded. For tonight, at least, the frontrunner was allowed to front run.